Pro boxers losing early and often at the Tokyo Olympics 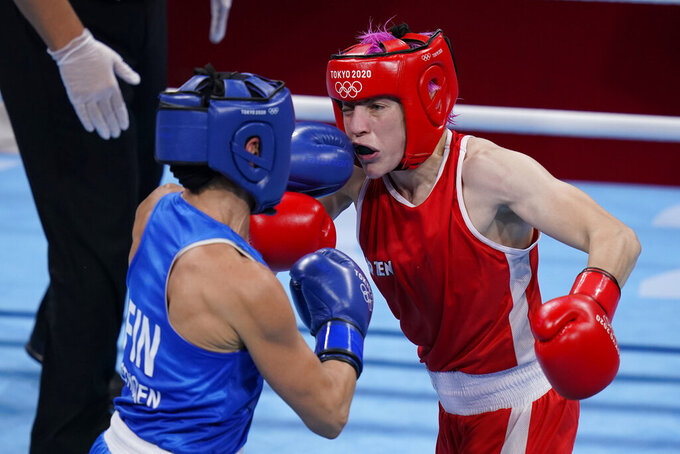 TOKYO (AP) — Professional boxers are getting knocked out of the Olympics early and often for the second straight Games.

Hamadouche and Koszewska are two of the three most experienced professional boxers who qualified among a group of more than 40 for Tokyo. Their experience is not proving to be an advantage in the world of Olympic boxing.

Hamadouche was furious after three of the five judges scored her bout for Potkonen 29-27, with a fourth judging it even and only one giving it to the current 130-pound professional champion.

The purple-haired Hamadouche walked around the ring with her arms extended in disbelief after coming out on the wrong end of a high-energy fight against Potkonen, a mother of two who won bronze in Rio.

“It’s very disappointing,” Hamadouche said through a translator. “I respect Olympic values, but for me, I didn’t lose this fight. It’s disrespectful to my work, and particularly, I didn’t lose the third round.”

Three of the five judges scored the third round for Potkonen, who appeared to get outworked by Hamadouche down the stretch.

The most experienced male professional in the Olympic field also lost a day earlier. Wilfred Ntsengue, who fights out of Montreal for Cameroon, didn't gain much benefit from his nine bouts of pro experience in a narrow split-decision loss to Tshama Mwenekabwe of the Democratic Republic of the Congo.

The International Boxing Association (AIBA) altered decades of amateur tradition in 2016 when it allowed all professional boxers to attempt to qualify for Rio de Janeiro. Only three pros qualified in the compressed time frame, and the three men combined to win just two fights and no medals.

Those results calmed the concerns of some boxing experts who thought pros would forever alter the Olympics. Even though dozens of more pros qualified for Tokyo — and others might have tried without the coronavirus pandemic altering the qualifying process — those concerns still appear to be unfounded early in the second Olympics with pros in the field.

Just as they did in Rio, the pros in Tokyo are struggling to adapt their styles to the criteria of the amateur sport’s judges — although to be fair, veteran amateurs are often baffled by the differences among judges from different continents and backgrounds in certain fights.

The most experienced pro left in the field is Serbian flyweight Nina Radovanovic, who dumped Canada's Mandy Bujold out of the tournament in their opening bout. Radovanovic, who is 14-4 as a pro and once held the IBF flyweight title, fights again Thursday.

The most experienced male professional left in Tokyo is Uzbek super heavyweight Bakhodir Jalolov, who is 8-0 as a pro. He begins his second Olympics on Thursday.

Several pros have already won fights, but most of those winners have only a handful of bouts of professional experience.

The path to success appears to be keeping one foot in each boxing world — such as Keyshawn Davis, who had three professional bouts earlier this year before making his Olympic debut Sunday with a one-sided win over the Netherlands' Enrico Lacruz.

“In my previous competitions in the amateurs, each day I got better and better,” Davis said. “I’m happy that I'm here. I have never experienced anything like this before, and now that I have experienced it, I’m glad I got the opportunity to come back and represent Team USA.”