Probe: CDC official says she was ordered to delete email 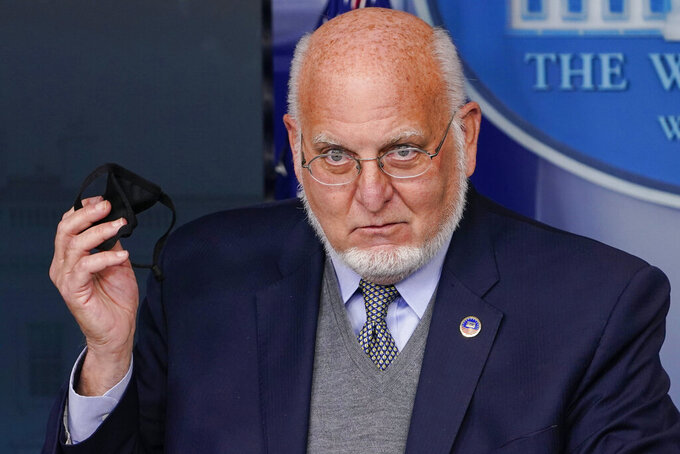 Centers for Disease Control and Prevention Director Dr. Robert Redfield holds a face mask as he speaks during a news conference with the coronavirus task force at the White House in Washington, Thursday, Nov. 19, 2020. (AP Photo/Susan Walsh)

WASHINGTON (AP) — A senior manager with the Centers for Disease Control and Prevention told congressional investigators she was ordered to delete an email suggesting attempted political interference by the Trump administration in coronavirus reports to the public, according to a transcript released Thursday.

Rep. James Clyburn, D-S.C., who released the partial transcript, said the testimony of Dr. Charlotte Kent raises “serious concern about what may be deliberate efforts by the Trump administration to conceal and destroy evidence that senior political appointees interfered with career officials’ response to the coronavirus crisis.” Kent testified that she believed CDC Director Robert Redfield ordered the deletion of the email.

In a letter to Health and Human Services Secretary Alex Azar, Clyburn accused the administration of trying to obstruct his investigation and threatened to issue subpoenas to compel the release of documents. Clyburn chairs a special House panel empowered to broadly examine the coronavirus crisis and the government's response.

HHS said in a statement that Clyburn's committee is “not operating in good faith” and called its portrayal of the CDC official's testimony “irresponsible.”

HHS also released a brief statement from Redfield in which he said he had instructed agency staffers to ignore the email but did not mention ordering its deletion.

As required by law, federal officials are supposed to be scrupulous about retaining records.

At issue is what happened last summer to an email sent to the CDC from a now-departed HHS adviser, Dr. Paul Alexander. Working with then-HHS top spokesperson Michael Caputo, Alexander was brought into the department at a time of high tension between White House officials and Azar. Caputo and Alexander represented the White House at HHS, a bureaucracy that President Donald Trump was deeply suspicious of.

Kent occupies a high perch in that bureaucracy as CDC's chief of scientific publications and editor-in-chief of Morbidity and Mortality Weekly Report, or MMWR, a publication that tracks disease trends of interest to the medical community.

MMWR has become a flashpoint for controversy under Trump. According to documents released by Clyburn's committee, Alexander fired off an Aug. 8 email demanding that CDC go back into a scientific report it had already published about coronavirus risks to children and splice in new language, or “pull it down and stop all reports immediately.”

The email went on to say that "CDC tried to report as if once kids get together, there will be spread and this will impact school reopening.

“Very misleading by CDC and shame on them. Their aim is clear. … This is designed to hurt this Presidnet for their reasons which I am not interested in.” Alexander apparently misspelled the word “president.”

Kent told congressional investigators that the email was addressed to her, Redfield and possibly others. She said she was ordered to delete it the following day, a Sunday.

But when she went to look for it, it was already gone.

Kent testified that she believed the order to delete the email came from Redfield. It was transmitted to her through another official.

Redfield said Thursday in a statement that “regarding the email in question, I instructed CDC staff to ignore Dr. Alexander’s comments. As I testified before Congress, I am fully committed to maintaining the independence of the MMWR, and I stand by that statement.”

The CDC director, a political appointee, has also been the target of blistering criticism from Trump, who once called Redfield “confused” for accurately saying a coronavirus vaccine might not be widely available until next year.

Kent told congressional investigators she was fully aware that Alexander's email was the type of communication that would normally be kept by the agency, not deleted.

“I considered this to be very unusual,” she said, according to the partial transcript released by Clyburn.

Certain “persons in the agency, like center directors and the director, their email, you know, cannot be deleted,” she said.