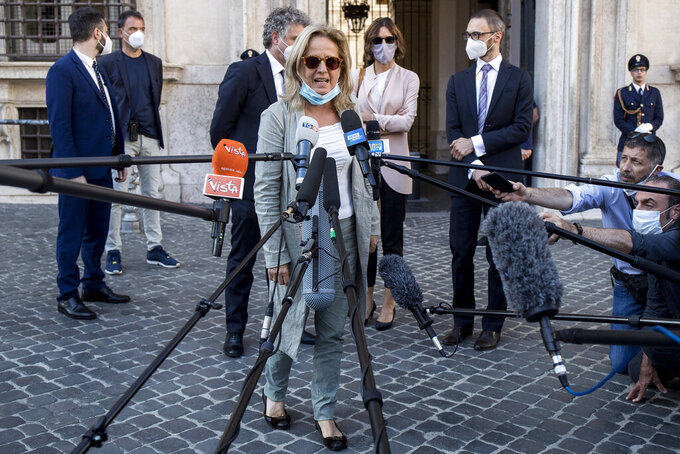 FILE - In this June 12, 2020 file photo, lead prosecutor Maria Cristina Rota talks with reporters as the leaves Palazzo Chigi premier's office, in Rome. Prosecutors from northern Italy have traveled to Rome again Thursday, Jan. 28, 2021, to question the health minister and others as part of their broadening investigation into whether to lay any criminal blame for Italy’s horrific coronavirus toll. Back in June, Bergamo prosecutors questioned Premier Giuseppe Conte, Health Minister Roberto Speranza and other top officials about the delayed lockdown in two Bergamo towns where infections were reported in the early days of Italy’s outbreak. Bergamo subsequently became the Italy’s COVID-19 epicenter, the first in the West, registering a 571% excess mortality rate in March compared to the average of the previous five years. (Roberto Monaldo/LaPresse via AP)

ROME (AP) — Prosecutors from northern Italy traveled to Rome on Thursday to question the health minister and others as part of their broadening investigation into whether to lay any criminal blame for Italy’s horrific coronavirus toll, and whether a lack of preparedness contributed to it.

Back in June, Bergamo prosecutors questioned Premier Giuseppe Conte, Health Minister Roberto Speranza and other top officials about the delayed lockdown in two Bergamo towns where infections were reported in the early days of the outbreak.

Bergamo went onto become Italy’s COVID-19 epicenter, the first in the West, registering a 571% increase in excess deaths in March compared to the previous five-year average.

The Bergamo probe, though, has now expanded beyond the lockdown issue to look into Italy’s preparedness going into the pandemic, investigators say. A scandal over a spiked World Health Organization report into Italy’s response has revealed that the country's influenza pandemic preparedness plan hadn’t been updated since 2006.

But Bergamo investigators are also looking looking into indications that even that 2006 plan was never implemented once the outbreak hit, contributing to what the WHO called Italy’s “improvised, chaotic and creative” response to the thousands of sick who quickly overwhelmed Lombardy’s hospitals.

“What is emerging is that they never implemented what they had, which is more serious than the fact that it wasn’t updated,” a Bergamo investigator told The Associated Press, speaking on condition of anonymity because he wasn’t authorized to reveal details of the investigation.

Lombardy officials have defended their handling of the outbreak, while those responsible for updating the pandemic plan have noted that the 2006 document was a set of guidelines for an influenza pandemic, not a coronavirus one. Investigators however say there was plenty of crossover that could have been applied, such that the WHO recommended Jan. 5 that member states adopt guidance plans for influenza or virus pandemics to be prepared for what was then believed to be a still-contained outbreak in Wuhan, China.

The pandemic plan isn't the only headache for Lombardy officials. They are also in the spotlight for having apparently provided the Italian Superior Institute of Health with incomplete virus data that resulted in the region being declared a “red zone” for part of January, with all nonessential commercial activities shuttered, when it didn’t necessarily deserve to be.

But the institute says Lombardy failed to provide updated data on people who eventually tested negative or were cured of COVID-19. That led to inflated numbers of current cases that skewed the institute's monitoring system, showing that Lombardy had far more sick people than it really did.

The mishap and ensuing “red zone" closures resulted in millions of euros in lost revenue for businesses in Lombardy, Italy's economic engine, prompting the National Association of Consumers, unions and some individual lawyers to announce class action lawsuits to try to recover some of the losses.

To date, no one has been indicted in the Bergamo investigation, and it’s not clear what, if any, criminal responsibility might be assigned to public officials for decisions taken or not.

Italy has the sixth-highest COVID-19 death toll in the world. The country reported another 492 victims Thursday, bringing its confirmed total to about 87,000, more than any other European country but Britain.