Proenza designers reflect on getting off the 'hamster wheel' 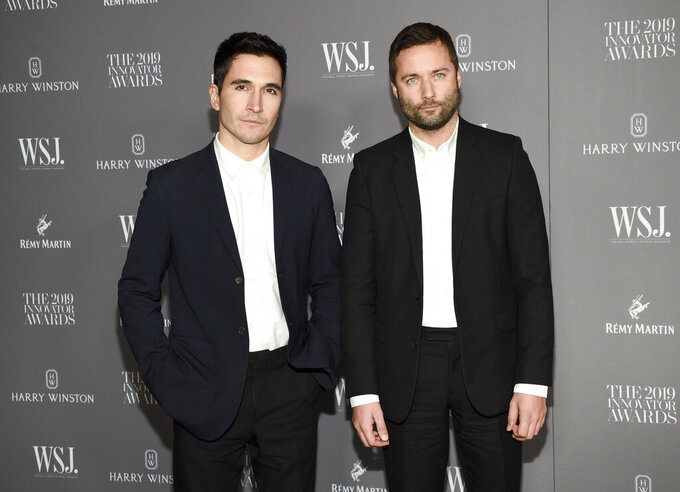 FILE - Designers Lazaro Hernandez, left, and Jack McCollough attend the WSJ. Magazine 2019 Innovator Awards in New York on Nov. 6, 2019. The designer duo have been thinking about longterm changes to the way they and their colleagues work. In an interview they mused that maybe less is more and they don’t need to do runway shows with every collection. (Photo by Evan Agostini/Invision/AP, File)

NEW YORK (AP) — As New York was grinding to a halt in the spring, Lazaro Hernandez and Jack McCollough, the designers behind Proenza Schouler, were a world away, trekking in Patagonia. They came back to a changed city.

“Those first couple of weeks were obviously spent just figuring out how to keep the company afloat,” says Hernandez. Then the duo realized they had to start drawing their next collection. They sat in their studio in Massachusetts “with a blank sheet of paper, a pencil, blank walls, and we’re like, ‘All right, here we go … what are we gonna draw?’ We had NO idea.”

What eventually emerged was a collection, just released, that dispensed with much of the spectacle and structure of a fashion show — because for once, there wasn’t going to BE a show — and focused on ease, heavy on soft fabrics and, strikingly, shoes that resemble mini-puffer jackets. “We wanted a sense of serenity to the collection,” says McCollough. Of course, they also didn’t know if anyone was going to feel like buying clothes.

The designers also had to figure out how to present their wares. Most labels have been embracing digital presentations. Proenza Schouler opted to make a hardcover book — “something that stands the test of time" — setting models against evocative New York settings like midtown at sunset or amidst skateboarders in the park.

The designers have also been thinking about longterm changes to the way they and their colleagues work. Maybe, they mused in an interview, less is more, and they don’t need to do runway shows with every collection.

“Maybe we don’t need to be in this rat race of a show every season,” says McCollough.

The interview has been edited and condensed for length.

AP: Everyone in New York has a story about where they were when the city suddenly shut down in the spring. What’s yours?

HERNANDEZ: We were actually in Patagonia. We came back and it was immediate lockdown. ... But you know us designers, we’re on this insane schedule, so we had to basically start thinking about drawing our spring collection. We had none of our usual processes in play. Usually we start with a feeling, a mood, and then start doing some research and we go through our archives and pull some of our old stuff, and start creating looks … then we go away and draw. This season we had none of that. It’s like a writer writing a book without an outline. So we just started doodling and drawing and riffing off each other. We dug deep into what we were feeling and all the conversations we were having with our friends.

McCOLLOUGH: This season was incredibly freeing in a lot of ways, knowing we weren’t having a show. We’ve had a show every single season since we started our career. (This time) we were a little more free, thinking about the woman’s life and how she’s living in these clothes, less about creating this spectacle and more about creating a wardrobe that can stand the test of time.

HERNANDEZ: And those feelings have manifested themselves in the actual clothes. We're all just wearing sweaters now. “Cozy” is such a non-fashion word ... but what does that word mean in a fashion context? We wanted everything so you could move in it, nothing restricting.

HERNANDEZ: People are still buying clothes. Business is not horrible. But I think the function of clothes has changed, no one is going to cocktail parties or … corporate work meetings. It’s all happening at a more intimate level, whether it’s via Zoom like we’re doing now or a small gathering at people's homes. I think this calls for a kind of intimacy in clothing, it’s not this idea of peacocking that people used to do on the streets.

McCOLLOUGH: : I think people want to dream, though, of things they desire. Even if they don’t have a purpose for them right in the moment. So finding that balance is important.

AP: You must have worried at some point that nobody would want to buy clothes again.

McCOLLOUGH: March and April were really scary. It was very unprecedented times and we were dealing with this for the first time ever. It was so unclear as to what the future would look like. Also, (usually) in April we get all our fabrics from Italy. But Italy was in lockdown, so what were we going to do? We went back to this archive of fabrics we have. I’d say about 80-90% of the collection is all upcycled from stuff we already owned.

AP: What changes will last from all this, when the pandemic is over?

McCOLLOUGH: It would be really unfortunate if the world went back to normal and it was just business as usual. Everything from our exploration into sustainability — it’s almost irresponsible not to be talking about that -- to just approaching things differently. We’re on this hamster wheel of show after show after show, and we’ve realized we could say something as strong about a collection without having a show. Maybe we don’t need to be in this rat race of having a show every season. Maybe take a season off when we don’t have something to say.

AP: Yes, what if one season you just don’t have a good idea?

HERNANDEZ: Designers aren’t allowed that luxury. But I think all those industry rules have been thrown out the window, and it’s allowed everyone to do what feels right for them. There’s a fluidity in that. We’re approaching everything moving forward with much more thoughtfulness and intent and less waste, and doing less things, but doing them with more quality.