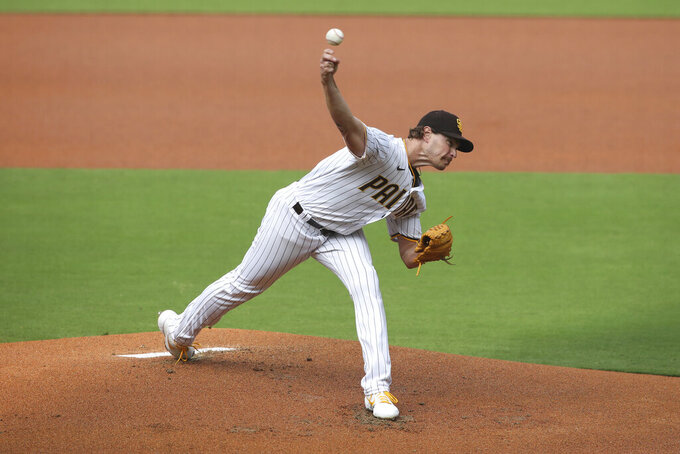 SAN DIEGO (AP) — With a winning record clinched for the first time in 10 seasons and a long-sought playoff berth on the horizon, the streaking San Diego Padres will try to avoid getting too psyched up for their biggest series in a long time.

The Padres swept a doubleheader against the San Francisco Giants on Sunday, winning 6-0 and 3-1 to extend their winning streak to seven games. On Monday night, they'll face Clayton Kershaw in the opener of a home three-game series against the NL West-leading Los Angeles Dodgers.

“I do know that everybody wants to talk about the Dodgers series, which is a big series here in San Diego, that we haven’t had in a long time, but at the end of the day we’ve got to focus on what we can do and not worry about the other jersey," said Wil Myers, the longest-tenured Padres player who hit a tying solo homer in the second game of the doubleheader.

Myers said he was going home and probably watching football rather than the rest of the Dodgers' game against the Houston Astros.

“I do know that if we look at this as something bigger than it is, it won't bode well,” Myers said. “Obviously everybody knows this is a big series against a team that's at the top of the division, but if you look over and worry about the other uniform, you won't be able to play as well. For us coming into tomorrow, it's another game where we'll go out here and beat the other team that's there.”

That's what they did Sunday. Jurickson Profar hit a go-ahead RBI single in the fifth inning in the second game of a doubleheader forced by a false positive COVID-19 test.

In the first game, Mike Clevinger threw a two-hitter for his second career shutout. Greg Garcia and Myers each had a two-out, two-run single off Johnny Cueto (2-1).

The Padres have won 11 of 13 games. They entered the day three games behind the Dodgers in the NL West. With the playoffs expanded in the pandemic-shortened season, the Padres are in firm control of second place as they close in on their first postseason berth since 2006. Their last winning season was 2010, when they had the best record in the NL in late August but staggered down the stretch and missed the playoffs.

The Giants, who are in the wild-card hunt, have lost three straight after winning five in a row.

“It’s a lot of fun,” Padres rookie manager Jayce Tingler said. “It’s really hard to take a doubleheader. It certainly helps you go 14 innings and your pitchers give up one run against a really good offense.

“We believe our best baseball is ahead of us,” Tingler said.

San Francisco said Sunday that outfielder Alex Dickerson received news of a positive test result for the novel coronavirus minutes before he was set to play against his hometown team on Friday night. Dickerson was pulled off the field and placed in isolation at Petco Park, and games Friday and Saturday nights were postponed.

Major League Baseball and the players’ union said Sunday morning that it was determined to be a false positive.

With runners on first and second and no outs in the fifth inning of the second game, Profar executed a Butcher Boy, where he showed bunt and then swatted a single off Sam Selman (1-1) that deflected off third baseman Evan Longoria's glove and rolled into left field, bringing in rookie Jake Cronenworth with the go-ahead run. Manny Machado added a two-out RBI single .

Tim Hill (3-0) pitched a perfect fifth for the win. Trevor Rosenthal pitched the seventh for his 10th save in as many chances.

“I would say it was a combination of us just not making quite enough pitches and definitely not swinging the bats the way we’re capable of swinging the bats in the series," Giants manager Gabe Kapler said. "Certainly today that was true as well.”

Kapler said there “were certainly some challenges associated with the last couple of days” but that they weren't insurmountable. "It’s our responsibility to come to the ballpark for a doubleheader today and be prepared for these games. I think we were, we just weren’t at our best.”

Clevinger said he didn't have a good session warming up, but then he came out and struck out leadoff batter Yastrzemski on a 98 mph fastball.

“Surprisingly enough, that's usually how it works when your bullpen’s not good,” he said. "I had a not-so-excellent bullpen before this day and the second I’m on the mound, I felt like everything was there.

“I felt like I got in a good rhythm,” said Clevinger, who was making his third start since coming over from Cleveland in a blockbuster trade on Aug. 31. “This was kind of the the first time I was on back-to-back five-day schedules in a while so it was good to feel that pattern. It’s easier to find my patterns and my delivery by staying on routine.”

Clevinger (3-2) struck out seven and walked one in seven innings for his second career complete game.

Dickerson said the news of the positive test “came as a complete shock and at no point did I ever think it was real." Dickerson had a half-dozen more tests and, despite an emotional and physical ordeal, was back on the field Sunday, getting the first hit off Clevinger in the first inning.

Garcia hit a two-run single in the second inning and Myers had his two-run base hit in the third. The Padres added two unearned runs in the sixth.

MLB hasn’t said when the other postponed game will be made up. The Padres finish the season with games at San Francisco Sept. 25-27.

Giants: Placed RHP Trevor Gott on the 10-day injured list with inflammation in his pitching elbow. The move is retroactive to Thursday. Manager Gabe Kapler expects him to return this season. ... Kevin Gausman was scratched from the Game 2 start because of elbow tightness. Gausman experienced the elbow issue playing catch a few days ago and will undergo an MRI exam.

Padres: RHP Dinelson Lamet (2-1, 2.24) is scheduled to start Monday night’s opener of a three-game home series against the NL West-leading Los Angeles Dodgers, who will counter with LHP Clayton Kershaw (5-1, 1.98)