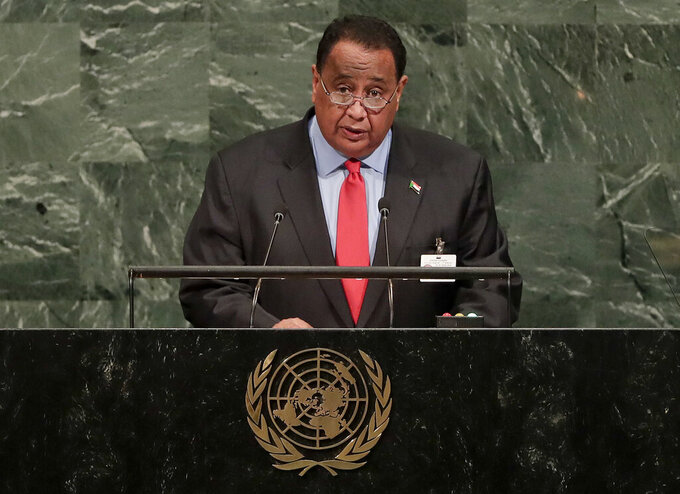 FILE - In this Sept. 23, 2017 file photo, then Sudanese Minister of Foreign Affairs Ibrahim Ghandour speaks during the 72nd session of the United Nations General Assembly, at U.N. headquarters. On Tuesday, June 30, 2020, Sudanese protesters returned to the streets to pressure transitional authorities, demanding justice for those killed in the uprising last year that led to the military’s ouster of longtime autocrat Omar al-Bashir. Ghandour, head of the now dissolved National Congress Party, was arrested Monday from his Khartoum home, the party said in a statement. (AP Photo/Julie Jacobson, File)

CAIRO (AP) — Sudanese protesters returned to the streets Tuesday to pressure transitional authorities, demanding justice for those killed in the uprising last year that led to the military’s ouster of longtime autocrat Omar al-Bashir.

For the most part, the demonstrations passed peacefully, but there were some reports of violence. As the rallies got underway, police used tear gas to disperse protesters marching on a road leading to the airport in the capital, Khartoum.

One protester was shot in the chest and later died at the Omdurman Educational Hospital, said Dr. Mohammed al-Haj, head of the intensive care unit. It was not immediately clear whether police were behind the shooting. Information Minister Faisal Saleh confirmed the protester's death in brief televised comments late Tuesday, and mentioned “a number of wounded” in the capital and other provinces.

Protesters also filled the streets in Kabkabiya, North Darfur, where police allegedly opened fire to disperse the crowds, wounding six people as young as 12 years old, according to Adam Regal, a spokesman for a local organization that helps run displacement camps in the area. Two were hit in the head by stray bullets, he said.

The “million-man march” was called by the Sudanese Professionals’ Association, and the so-called Resistance Committees, which were instrumental in the protests against al-Bashir and the generals who took over power for months after his removal.

Security forces closed off major roads and streets leading to government and military headquarters in Khartoum ahead of the protests, which fall on the anniversary of the Islamist-backed coup that brought al-Bashir to power in 1989, toppling Sudan’s previously elected government.

The protests are also the first major demonstrations since rallies last year — three months after al-Bashir ouster — when hundreds of thousands of protesters took to the streets in Sudan’s capital and elsewhere in the country to pressure then-ruling military council to hand over power to a civilian government,

Prime Minister Abdalla Hamdok on Monday sought to reassure the protesters, saying that their demands are “legitimate” and “necessary to correct the revolution’s track.”

He said the military-civilian alliance that rules Sudan during this transitional period was “sensitive and critical,” adding that there are many “difficulties” that threaten its stability. He did not elaborate.

Hamdok promised his transitional government would work to carry out the protesters’ demands in the next two weeks.

“In the coming days, a number of decisive decisions ... will follow," he said. “Some of them may have a significant impact — politically, economically and socially — and some parties will try to use them to fuel and create instability.”

They were arrested in a raid on a house in Khartoum on June 18, and brought to prosecutors for further investigations, Saleh added.

Sudan's former foreign minister, Ibrahim Ghandour, who also headed al-Bashir's party, was arrested Monday at his Khartoum home, the party said in a statement. The party's leaders were holding a “normal societal activity” when he was arrested, the statement said.

Al-Bashir had fired Ghandour in February last year, after he told reporters that the government was behind seven months on paying diplomats’ salaries. The former top diplomat was appointed the party chairman after al-Bashir’s removal in April last year.

Last August, the protests, along with international pressure, forced the generals to sign a power-sharing deal with the protesters, creating a joint civilian-military “sovereign council.” However, the civilians part of the government has struggled to assert authority in the face of the military’s power.

The protest organizers also called for the appointment of civilian governors for Sudan’s provinces and making peace with the country’s rebels who were part of the power-sharing deal.

They also called for swift, public trials for al-Bashir and top officials in his government. Al-Bashir, who has been in prison in Khartoum since his removal, faces an array of accusations related to the 1989 coup and the crackdown against the uprising against his rule.

Meanwhile, in central Darfur province, hundreds of people, mostly displaced and refugees, were camping for the second day outside government buildings in the town of Nitrite.

The protesters call for the resignation of the provincial government, and a halt to attacks by government-sanctioned armed groups, said Regal, the displacement camp spokesman