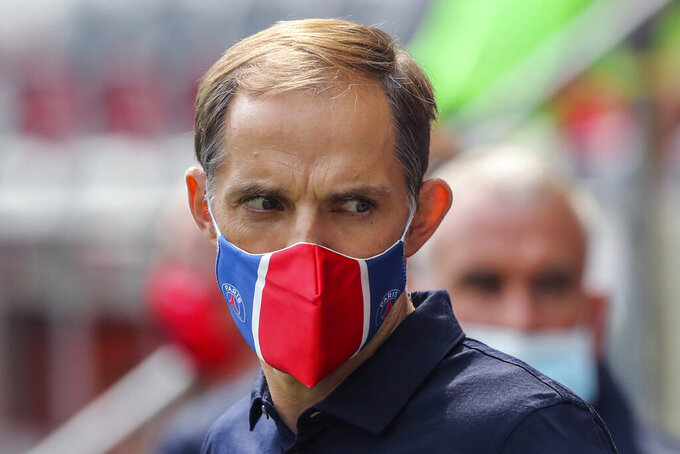 FILE - In this Sunday, Sept. 20, 2020 file photo, PSG's head coach Thomas Tuchel during the French League One soccer match between Nice and Paris Saint-Germain at the Allianz Riviera stadium in Nice, France. Paris Saint-Germain has fired coach Thomas Tuchel while the defending champion is in third place in the French league. Tuchel's dismissal on Thursday, Dec. 24, 2020 came the day after PSG beat Strasbourg 4-0 and after Tuchel was questioned about comments he made to German broadcaster SPORT1. (AP Photo/Daniel Cole, File)

The confirmation of Tuchel’s dismissal — only four months after he led PSG to the Champions League final — came after days of reports that the German would be replaced by Pochettino, the former Tottenham coach. However, PSG did not immediately announce a new hiring.

″I would like to thank Thomas Tuchel and his staff for everything they brought to the Club,” PSG President Nasser Al-Khelaïfi said. "Thomas has put a lot of energy and passion into his work, and of course we will remember the good times we shared together.”

Tuchel is the third straight coach to be fired by PSG, following Unai Emery and Laurent Blanc.

PSG beat Strasbourg 4-0 on Wednesday but Tuchel was questioned after the game about comments he made to German broadcaster SPORT1.

In Tuchel’s first season, PSG opened with 14 straight league wins but failed to retain both of its domestic cup trophies and lost a string of league games near the end. It was also eliminated from the Champions League in the round of 16.

Last season, Tuchel bounced back by leading PSG to a domestic treble and the Champions League final, losing 1-0 to Bayern Munich.

Tuchel’s side had struggled at times this season with four league defeats. PSG fell short against its main rivals, losing 1-0 at home to Lyon and Marseille, and drawing 0-0 at Lille. It also lost two of the first three games in the Champions League though PSG ended up advancing to the knockout stage by topping its group.

Tuchel clashed with PSG sporting director Leonardo, who publicly rebuked him over comments made shortly before the end of the transfer window in October.

Tuchel said he needed new recruits and that the club let players go too easily, such as 200-goal scorer Edinson Cavani and stalwart defender Thiago Silva. Their contracts were not renewed and both are doing well in the English Premier League. Goal-scoring winger Angel Di Maria is also nearing the end of his contract.

“In general we lose too many players without receiving money. It started with (Adrien) Rabiot, a great player who left for free (to Juventus),” Tuchel said. “It carried on this season and it can continue next season ... It’s too much."

Coaching changes have been regular since Qatari investors QSI took charge of the club in June 2011.

Even though PSG was top of the league in December that year, Antoine Kombouare was replaced by former Chelsea manager Carlo Ancelotti, who quit after not getting assurances over a new contract and went instead to Real Madrid.

Blanc replaced Ancelotti but was then fired in June 2016, just months after getting a new contract and reportedly costing PSG 22 million euros ($27 million) in compensation.

Tuchel’s contract was expiring in June next year, but he will also receive significant severance pay.

The 48-year-old Pochettino played 95 games for PSG as a rugged central defender from 2001-03 and was appreciated by fans.

The Argentine has something in common with Tuchel, having been fired by Tottenham in November last year, only months after leading Spurs to the Champions League final. He was in charge of Tottenham for five years, losing the League Cup final in 2015.

He started out coaching with Spanish club Espanyol in 2009.