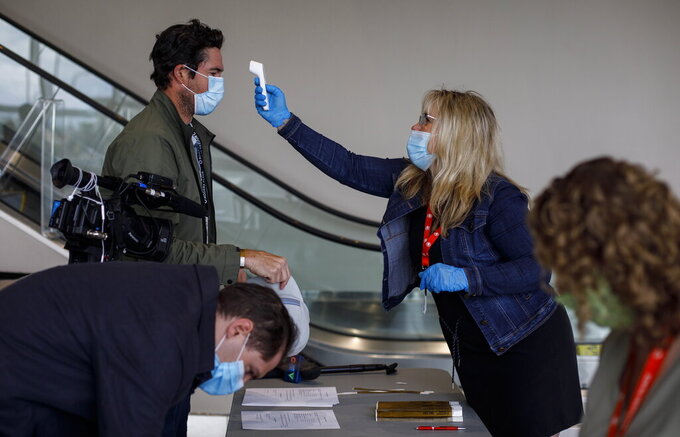 St. Louis Blues goalie Jordan Binnington is so accustomed to wearing a mask, he didn’t mind doing so for the past four months during the coronavirus pandemic.

“Sometimes, I forgot I’m wearing it while driving,” Binnington said Monday, when the Blues were among the NHL’s 24 teams to open training camp for the upcoming playoffs. “You make fun of those people who are driving by themselves with a mask on, but I sometimes forget.”

Goalies weren’t the only ones wearing masks as the NHL hit the ice, en masse, in the first full glimpse of hockey’s return since the regular season was placed on pause March 12.

Masked equipment managers patrolled the benches, clearing them of water bottles and towels following practices. In Nashville, general manager David Poile, 70, wore one while watching the Predators practice from a private suite.

And in Dallas, Stars interim coach Rick Bowness wore a mask while observing practice from an empty bench. At 65, he wasn’t taking any chances.

“I was going to err on the side of caution. I’m still very nervous about the COVID, and we haven’t tested our players since last Thursday,” Bowness said. Once results come back, he intends to return to the ice, perhaps as early as Wednesday

Players and staff all have their eyes on resuming the season with an expanded 24-team playoff set to begin in two hub cities - Toronto and Edmonton, Alberta, -- on Aug. 1.

“On the ice is normal,” Washington Capitals captain Alex Ovechkin said. “On the ice is same rules what we have before. But soon as you step off the ice in the locker room, everybody have to wear a mask. It’s kind of weird, but I’m pretty sure we’re going to get used to it.”

Players and everyone else who will be spending up to two months inside the “bubble" — including hotel staff, bus drivers and arena workers — will have no other choice but to get accustomed to the new reality if the NHL hopes to complete its most unique season. Once games resume, they will be played in empty arenas, with as many as three games played per day at each site, and with the Stanley Cup awarded in late September at the earliest.

There is no guarantee the league will be able to pull it off.

Though the familiar sound of pucks, skates and sticks echoed through arenas once again, the reminders of COVID-19 were also prevalent.

The NHL announced that 43 players had tested positive for the coronavirus from June 8 through the end of the league’s optional workouts. In Toronto, star forward Auston Matthews confirmed he tested positive while spending the break at his home in Arizona last month.

“It was the safest place to be,. And then obviously things flipped pretty quickly there,” Matthews said. “I did my quarantine, and I’m feeling healthy now, so it’s all good.”

In Pittsburgh, the Penguins voluntarily sidelined nine players after learning they may have had secondary exposure to a person testing positive for COVID-19. NHL rules barred the Penguins from revealing who the players were, but the most notable player not on the ice was forward Patric Hornqvist.

“It’s a matter of everyone working together and doing our best to be safe,” Crosby said. “Whether you are a player or a fan, you miss the game. You also have to understand the seriousness of what’s around you. We’re trying to find a balance for that... I’m optimistic.”

It was a far different story in Denver, where the Avalanche had nearly a fully complement of players practicing, which is a considerable turnaround. Nathan MacKinnon, Mikko Rantanen, Nazem Kadri, Cale Makar and goalie Philipp Grubauer were among the formerly injured players back on the ice, with only center Colin Wilson deemed not fit to play.

“The fun thing about returning now, after having some time off and jumping right into the most important time of year, is that you’re going to see everyone’s best players healthy, rested,” coach Jared Bednar said. “We’re all anxious and champing at the bit ready to go, which should be a lot of fun.”

In St. Louis, the defending champion Blues welcomed back scoring star Vladimir Tarasenko, who sustained a major injury to his shoulder 10 games into the season and was projected to miss five months.

“It’s a nice little secret weapon we’ve had all year, waiting to come back,” defenseman Alex Pietrangelo said of Tarasenko. “Seemed like a pretty seamless transition, jumping back in with the rest of us.”

In Nashville, coach John Hynes drew out plays on a white board at the edge of the ice, with players gathered closely around him. Inside the arena, half the seats inside the lower bowl stayed stacked away, leaving concrete around much of the ice.

Nashville goalie Pekka Rinne said the unknowns and questions left him concerned during his return from his native Finland to the United States. Now, the 37-year-old goalie feels much more comfortable after seeing the protocols being used.

“We come to the Bridgestone Arena and you could eat off the floor,” Rinne said. “I mean, it’s clean. It’s a safe place so far.”