PWHPA forging ahead without NHL backing of women's hockey 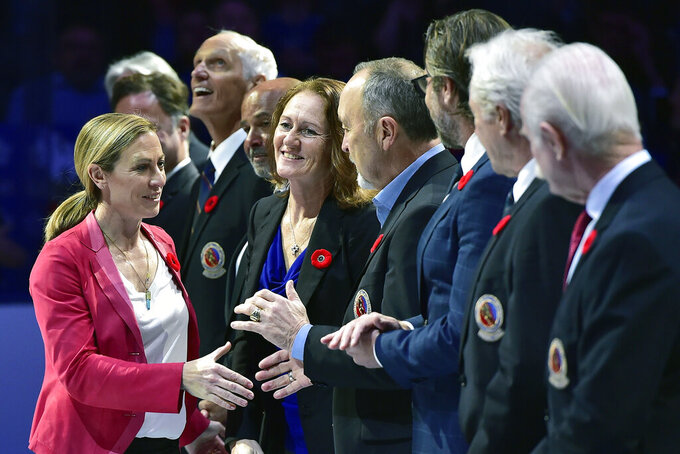 FILE - In this Nov. 9, 2018, file photo, Hockey Hall of Fame inductee Jayna Hefford shakes hands with people associated with the hall before a hockey game between the Toronto Maple Leafs and the New Jersey Devils in Toronto. The Professional Women’s Hockey Players’ Association is forging ahead in its bid to establish an economically sustainable professional league in North America with or — for now — without the NHL’s full financial backing. In response to Sportsnet.ca reporting the NHL was not in a position to operate a women’s league for the foreseeable future, PWHPA executive Jayna Hefford wrote in an email to The Associated Press late Thursday that her group has begun developing what she called “a parallel path for a future that doesn’t rely on NHL support.” (Frank Gunn/The Canadian Press via AP, File)

The Professional Women’s Hockey Players’ Association is forging ahead with its bid to establish an economically sustainable professional league in North America with or — for now — without the NHL’s full financial backing.

In response to a Sportsnet report that the NHL was not in a position to operate a women’s league for the foreseeable future, PWHPA executive Jayna Hefford wrote in an email to The Associated Press that her group has begun developing “a parallel path for a future that doesn’t rely on NHL support.”

Without going into detail, Hefford expressed optimism in citing the numerous corporate partners the PWHPA has attracted during its two years of existence. Those partners include individual NHL teams.

“We aren’t focusing on who doesn’t want to partner with us. We are excited about aligning our passion with those who do,” Hefford wrote late Thursday.

NHL deputy commissioner Bill Daly did not respond to an email seeking comment.

The statement comes a month after the U.S.-based, six-team NHWL announced it was doubling its salary cap to $300,000 per team entering its seventh season. The Sportsnet report suggested the NHL is willing to consider some form of participation should the PWHPA and NWHL formulate a joint plan.

Hefford said she has had discussions with the NWHL.

“The door has always been open to discuss how we move the game forward,” Hefford said. “We want what is best for the sport, and best for the players. We are willing to work with all relevant groups to find a solution for what’s best for this generation and the next.”

The NWHL declined comment except to confirm talks have taken place with the PWHPA.

Last month, NWHL Commissioner Ty Tumminia told The AP she was willing to listen if the PWHPA approached her, and added she didn’t believe the two sides’ objectives in growing the sport were all that different.

Financial backing from the NHL has been on the wish list for women's hockey for some time. But hte league is scrambling to recover from the severe financial hit it took as a result of the coronavirus pandemic. The league’s salary cap, a key indicator for revenue, was unchanged this season at $81.5 million, and is projected to remain flat for the next two or three seasons.

The PWHPA, made up of the world’s top female players, was formed two years ago in the wake of the Canadian Women’s Hockey League's financial demise.

PWHPA members balked at joining the NWHL because they were skeptical of the privately-backed league’s economic model. The PWHPA instead sought a fresh start in forming a new league — preferably with the NHL’s backing — with reliable wages and benefits.

The PWHPA is completing its second year of holding a series of barnstorming stops, billed as Dream Gap Tours, one of which is being held in St. Louis this weekend, followed by a weeklong event in Calgary, Alberta, later this month. The NHL's Blues and Flames are event sponsors.

Players are split across five hub cities (two in the U.S. and three in Canada), where they have access to practice rinks and facilities, which are backed by funding from PWHPA partners, including Secret, Budweiser and adidas.

Hefford said the PWHPA has every intention to continue the Dream Gap stops next season, even though its U.S. and Canadian national team members won’t be able to participate due to their commitments to prepare for the 2022 Winter Games.

Hefford said she has no worries about PWHPA members potentially breaking ranks to join the NWHL as a result of increasing salaries.

“No concerns. Players need to make the decision that is best for them,” she said.

“We stand by the path we’ve taken, and the vision we have for creating change in women’s hockey,” Hefford wrote. “Our members have been incredibly unified in sharing that vision, which we all believe will leave the game in a better place.”