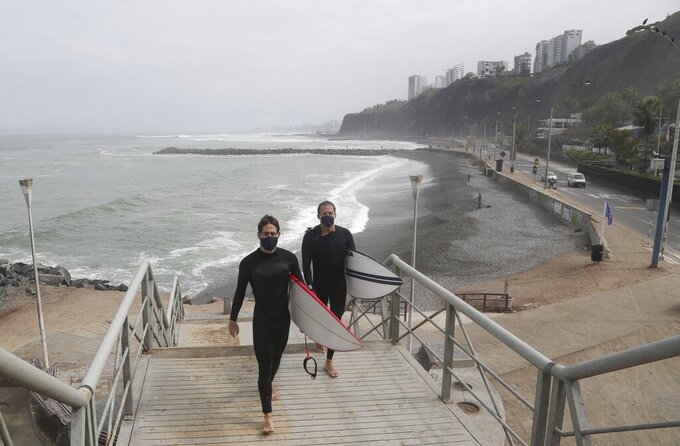 Wearing face masks as a precaution amid the spread of the new coronavirus, surfers leave the reopened Waikiki beach in the Miraflores district of Lima, Peru, Thursday, June 11, 2020. The emblematic surfers who dot Peru's coastline are retaking to the waves as the hard-hit nation relaxes COVID-19 related restrictions on outdoor sports. (AP Photo/Martin Mejia)

LIMA, Peru (AP) — Peruvian surfers are returning to their nation’s world-famous waves after three months spent in lockdown due to the coronavirus.

Wearing masks and carrying their boards, the surfers this week descended onto Lima’s rocky beaches for the first time since the pandemic shutdown.

“It was about time, no?” said a smiling Alessandro Currarino, sporting a black wetsuit and matching face mask after hitting the waves. “Peru has some of the best waves in the world and we need to take advantage of them.”

The South American nation has been hit hard by the COVID-19 pandemic, confirming nearly 210,000 cases – the second-highest number in the region, after Brazil. Authorities in early June announced they’d begin allowing non-contact sports to resume.

Peru is home to some of the world’s top surfers and the sport is believed to have been practiced as far back in time as the pre-Inca Chimu civilization. In the town of Huanchaco, north of Lima, fishermen still ride the waves back to shore with the day’s catch on the same reed boats used by the Chimu people.

At least one Peruvian surfer was expected to participate in the 2020 Tokyo Olympics this summer before the games were postponed.

Peru is gradually reopening after instituting a strict quarantine in mid-March. Under the new rules, the surfers must wear face masks while on land and practice social distancing. They are also required to walk a farther distance to get to the beach.

“After so many days in quarantine, we want people to go out, carefully,” said Jaime Rozeznic, sub-director for sports and recreation in the Miraflores municipality.

Maria Fernanda Reyes, 22, a five-time national surf champion, said she continued to do strength exercises at home but the long spate out of the water nonetheless had had an impact on more technical aspects of her training.

“More time in the water the better,” she said during a break Thursday from the cold, choppy waves. “For me, this is where I was born.”