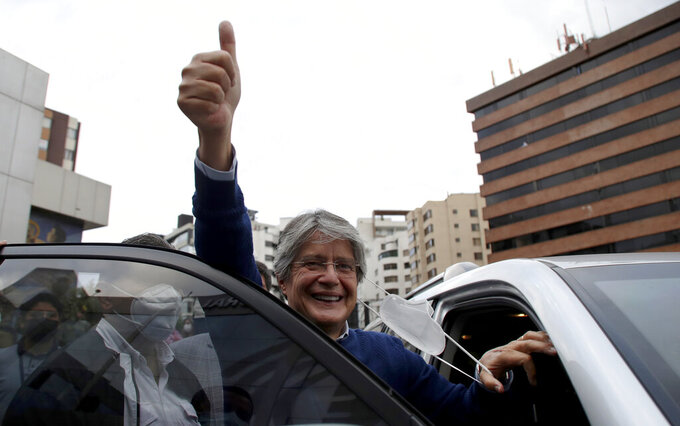 Presidential candidate Guillermo Lasso, representing the Creating Opportunities party or CREO, flashes a thumbs up after attending an event with rival Yaku Perez, of the Pachakutik political party, in which both are asking for a ballot recount of Sunday's election, in Quito, Ecuador, Friday, Feb. 12, 2021. It remains undecided which of the two has the votes to advance to the run-off race in April to face frontrunner Andres Arauz. (AP Photo/Dolores Ochoa)

QUITO, Ecuador (AP) — Ecuador is headed toward a presidential runoff that so far has brought disappointing results for nearly all involved at a time when the country, battered by a sour economy even before the pandemic, has been struggling for direction.

The leftist faction that has won the past four general elections is the clear favorite heading into the April 11 ballot, but its candidate, Andrés Arauz, barely managed to get about 33% of the votes in the election's first round Feb. 7.

A conservative who lost the last two presidential contests, Guillermo Lasso, emerged with a little under 20% of the votes, giving him a perilously fragile edge to get the other spot on the runoff ballot.

Yaku Pérez, a challenger from an environmentalist-Indigenous movement, made an unexpectedly strong showing, but so far has fallen just short of Lasso in the fight for the second runoff spot.

That has prompted allegations of fraud from Pérez's backers, who are part of a movement that led major challenges to a series of governments, toppling presidents at least twice in recent decades and which on Wednesday announced a march “in defense of democracy” scheduled to reach the capital next week.

Electoral authorities failed Tuesday to agree on the scope and rules for a partial recount of first-round votes to determine if Pérez or Lasso will face off with Arauz in April. By law, they were supposed to reach a decision by Wednesday.

A member of the electoral council, Luis Verdesoto, said on Twitter that its failure to reach a decision so far damaged “institutional stability and democracy.”

No matter who wins, “The outlook is very dark from this point on,” said Grace M. Jaramillo of the University of British Colombia, who formerly led the department of international relations at a leading university in Ecuador. “Under the three different scenarios, Ecuador is going to face a very difficult time in the following four years. It’s very pessimistic with Arauz, Yaku or Lasso.”

Arauz is backed by ex-President Rafael Correa, a former ally of Cuba's Fidel Castro and Venezuela's Hugo Chavez who remains heavily influential despite a corruption conviction that has left him watching from afar in Belgium, beyond the reach of Ecuadoran prosecutors.

Arauz has proposed making the wealthy pay more taxes, strengthening consumer protections, public banking and local credit and savings organizations, and backing away from agreements with the International Monetary Fund.

Correa became president in 2007 and was reelected twice with solid margins. He oversaw strong growth and declining poverty for much of his mandate, but was accused of increasing authoritarianism and repression of indigenous groups and the press.

His chosen successor, Lenin Moreno, won in 2017, but veered away from Correa toward more market-friendly policies that have stumbled at a time of high debts and low prices for Ecuador's oil. He feuded bitterly with his former mentor and chose not to seek reelection.

Correa's version of leftist politics often collided with that of Indigenous and environmental movements alarmed by oil and mineral developments. Pérez's Pachakutik party and other movements have mobilized protests, some that turned into major clashes, against a series of governments from right and left.

“They are completely against any candidate who is with Rafael Correa,” Jaramillo said of the Indigenous groups and their left-leaning backers. “It’s a vote against somebody, not a vote in favor of somebody.”

Indigenous communities led protests in October 2019 that forced Moreno’s government to back down on a move to end fuel subsidies.

Lasso is again running for the presidency after a long career in business, banking and government. He favors free-market policies and Ecuador’s rapprochement with international organizations.

Correa was sentenced in absentia in April to eight years in prison for his role in what prosecutors described as an elaborate scheme that demanded millions of dollars from businessmen in exchange for the contracts of large infrastructure projects between 2012 and 2016. He calls the allegations trumped-up charges for political ends.

On Friday, Pérez and Lasso agreed to seek a full recount in the coastal province of Guayas, where the conservative candidate has strong support, and to ask for verification of 50% of votes in 16 other provinces. But Lasso appeared to backtrack on his support for some of those recounts.

Marlon Santi, Pachakutik’s national coordinator, vowed to use “all the nececessary (legal) resources and means” to support Perez.

“We are not going to allow them to steal our victory and our right to participate in the second electoral round and achieve victory against the candidate who represents the return of corruption and authoritarianism,” Santi said.