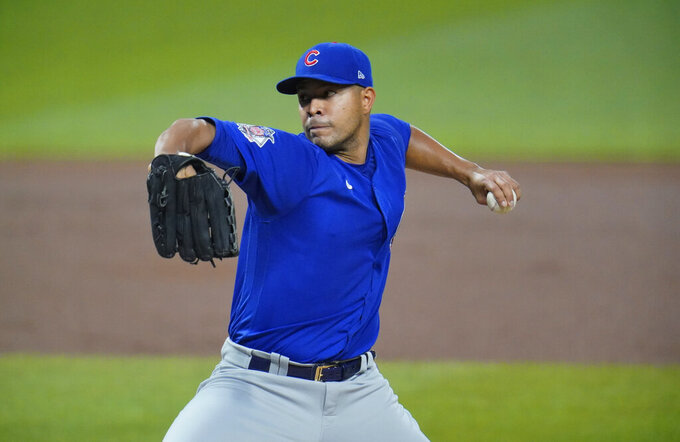 FILE - In this Sept. 22, 2020, file photo, Chicago Cubs starting pitcher Jose Quintana delivers during the first inning of the team's baseball game against the Pittsburgh Pirates in Pittsburgh. Quintana has agreed to a $8 million, one-year contract with the Los Angeles Angels, a person familiar with the negotiations told The Associated Press on Tuesday night, Jan. 19, 2021. The person spoke on condition of anonymity because the agreement is subject to a successful physical. (AP Photo/Gene J. Puskar, File)

Los Angeles was looking to boost its rotation following a fourth-place finish in the AL West at 26-34, 10 games behind first-place Oakland. Angels starters had a 5.52 ERA in the shortened 2020 season, 29th among the 30 major league teams and ahead of only Detroit’s 6.37.

Quintana was limited to one start and three relief appearances during the pandemic-shortened 2020 season, when he started late after surgery July 2 to repair nerve damage caused by a cut on the thumb of his pitching hand. The Cubs said Quintana was hurt while washing dishes at his home in Miami and that he needed five stitches.

Quintana made relief appearances on Aug. 25 and 30, and then was sidelined again by an inflamed muscle on the left side of his back. His only start was Sept. 22 at Pittsburgh. He made another relief appearance on Sept. 27 and finished 0-0 with a 4.50 ERA in 10 innings.

Los Angeles added a pitcher who turns 32 on Sunday and averages 91-92 mph with his fastball, spotting it with a curveball, sinker and changeup.

He began his big league career with the Chicago White Sox in 2012 and went 50-54 with a 3.51 ERA during six seasons on the South Side, which included his only All-Star selection in 2016.

He was prized in the trade market after agreeing in March 2014 to a club-favorable $21 million, five-year contract that included $10.5 million options for both 2019 and 2020. Quintana was dealt across town to the defending World Series champion Cubs in July 2017 for a package headed by top prospects Eloy Jiménez and Dylan Cease.