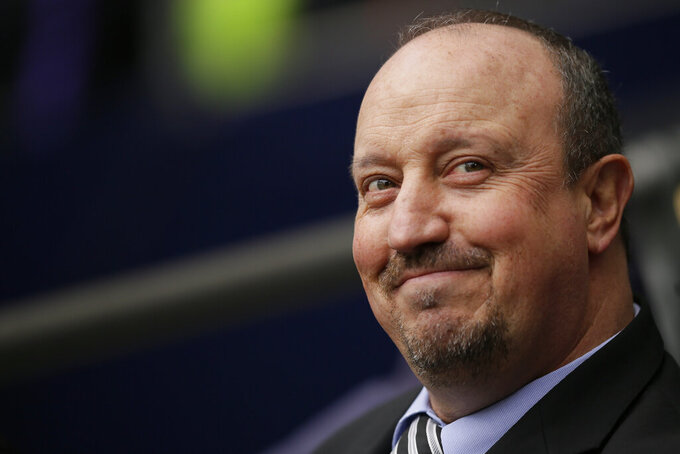 FILE - In this Saturday, Feb. 2, 2019 file photo, Newcastle coach Rafael Benitez smiles prior to the start of the English Premier League soccer match between Tottenham Hotspur and Newcastle at Wembley Stadium in London. Benitez has left Chinese club Dalian Pro citing family reasons during the coronavirus pandemic. Benitez says “supporting our families has been a priority when making this decision.” Benitez had one year left on his contract with Dalian which finished 12th in the 16-team Chinese Super League last season. (AP Photo/Tim Ireland, File)

“The pandemic is still here, for all of us, and supporting our families has been a priority when making this decision,” Benitez wrote in a statement on his personal website.

Benitez had one year left on his contract with the club, which finished 12th in the 16-team Chinese Super League last season.

“I say goodbye sadly under these circumstances, but at the same time I am convinced that the future will be bright for Dalian Pro,” he said.

The 60-year-old Spaniard went to China after a three-year spell re-establishing Newcastle in the English Premier League.

Benitez won the Spanish league twice and a UEFA Cup with Valencia before moving to Liverpool.

He led Liverpool to a surprise Champions League title in 2005, the first of his six seasons there.

Benitez later had short stints in charge at Inter Milan, Chelsea — winning the Europa League in 2013 — and Real Madrid.