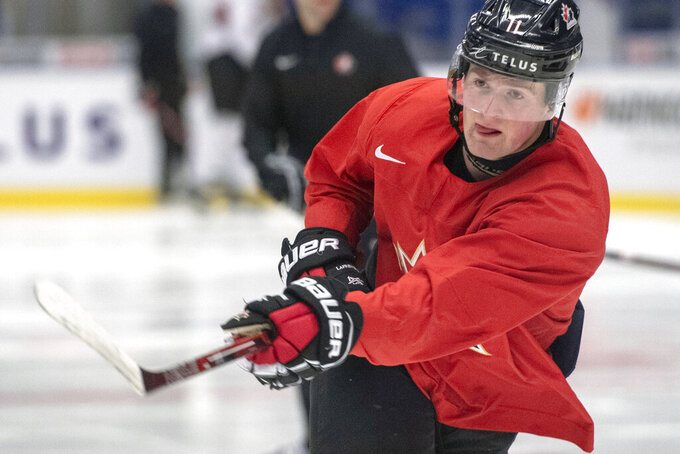 FILE - In this Jan. 1, 2020, file photo, Canada's Alexis Lafreniere shoots during the team's practice at the World Junior Hockey Championships in Ostrava, Czech Republic. The New York Rangers might be on the clock in owning the No. 1 pick in the NHL draft on Tuesday, Oct. 6. That, and the prospect of selecting Quebec star forward Alexis Lafreniere, doesn't mean the still-retooling Rangers will be anywhere closer to being a contender, team president John Davidson cautions. (Ryan Remiorz/The Canadian Press via AP, File)

New York Rangers president John Davidson refuses to get ahead of himself with his team in the unique position of holding the No. 1 pick in the NHL draft while also coming off an appearance in the expanded 24-team playoffs.

Exciting as it is having the opportunity to add someone such as projected top pick, Quebec-born play-making forward Alexis Lafreniere, to a young, retooling roster once the draft opens Tuesday night, Davidson cautioned the Rangers aren’t anywhere close to being a contender just yet.

The Rangers only made the playoffs because the NHL expanded the format to 24, rather than 16 teams. And even then, New York’s quick exit in being swept in three games by Carolina in the preliminary round wasn’t exactly reassuring.

“I think we have work to do, and I’m being bluntly honest,” Davidson said last week.

“Our No. 1 pick is going to be a very good hockey player, there’s no question, maybe even a great player, hopefully. But even he’s going to take some time to get there,” he added. “It’s a long hard climb, and we’re still in the middle of it.”

At least they’re getting a head start courtesy of a coronavirus pandemic-altered NHL year, in which the draft lottery fell in favor of the Rangers, and against the seven non-playoff teams with far better odds of landing the top pick. The Los Angeles Kings choose second, followed by the Ottawa Senators, who have three first-round selections, and the Detroit Red Wings, who were bumped to the No. 4 spot despite finishing with the NHL’s worst record.

As a result, the Rangers have the No. 1 pick for the first time since the NHL adopted the universal draft in 1969, and are the first team to select first when coming off a playoff appearance since 1983, when the then-Minnesota North Stars acquired the No. 1 pick in a trade with Pittsburgh.

The draft, originally scheduled to be held in Montreal in June, will instead be conducted with teams staying home to select remotely.

The Rangers, as most teams do before the draft, aren’t tipping their hand on whom they’ll select, though Lafreniere is considered the top contender with a chance to become the first Canadian player chosen No. 1 since Connor McDavid was drafted by Edmonton in 2015.

Ranked first among North American skaters by the NHL’s Central Scouting Bureau, the 18-year-old has an exemplary resume. In leading the Quebec Major Junior Hockey League with 112 points (35 goals, 77 assists) in 52 games with Rimouski, Lafreniere became the first to earn MVP honors in consecutive seasons since Sidney Crosby in 2004 and ’05, when he also played for the Oceanic.

At 6-foot-1 and 193 pounds, Lafreniere also helped Canada win the World Junior championship in January, and was the tournament’s MVP and best forward.

Rounding out the top three prospects are 6-foot-4 center Quinton Byfield, who played for OHL Sudbury, and top-ranked international skater, Tim Stutzle, who played pro in his native Germany last season. The top-ranked U.S.-born prospect is defenseman Jake Sanderson, who is the son of former NHLer Geoff Sanderson.

Lafreniere is considered to have the edge with Central Scouting referring to him as being an “exceptionally smart player with top-end speed and pull-away gear,” and having, “elite puck skills and vision to create plays in the offensive zone.”

From suburban Montreal, Lafreniere will miss the chance to walk on stage in his hometown whenever his name is called, and instead settle for spending the night at home with family and friends.

He isn’t fazed by the chance of playing in the New York spotlight, and is instead excited about the prospect of joining a Rangers team that includes one of his favorite players, forward Artemi Panarin.

“To be maybe having the chance to play with him, it would be an honor,” Lafreniere said. “The Rangers are a really big organization, and a really good young team. We’ll see what happens. But it’s a really exciting team for sure.”

The Rangers, who have 10 selections including No. 22 in the seven-round, two-day draft, continue to rebuild with youth. Last week, they bid farewell to goalie Henrik Lundqvist by buying out the final year of his contract, and also traded 13-year defenseman Marc Staal to Detroit for future considerations.

The Senators have a draft-leading 12 picks, including three first-rounders and six among the first 60 selections.

Ottawa GM Pierre Dorion is open to every option, including trading draft assets to upgrade a team that’s finished no better than 30th in each of the past three seasons.

“It has to make sense with what we’re trying to do as far as our rebuild our plan, and not try to jump steps that will make us a better team in the long term,” Dorion said.

Following the draft, the focus quickly shifts to the NHL’s free agency signing period, which opens Friday. General managers are bracing for a hectic weekend with numerous teams having to shed payroll this offseason with the NHL salary cap staying at $81.5 million.