Rangers place SS Andrus (back), OF Calhoun (hamstring) on IL 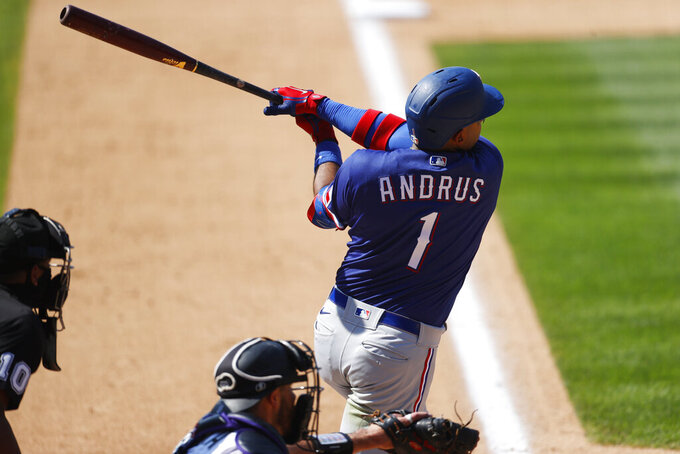 Calhoun suffered a left hamstring strain when running out an RBI infield single in the 10th inning of the Rangers' loss at San Diego on Wednesday night. An MRI on Thursday revealed a low-grade strain for Calhoun, who will be sidelined at least three weeks.

Andrus appeared as a pinch-runner in that game, but that was also the third straight day he didn't start because of a lower back strain. Before that, the shortstop was the only Rangers player to start each of their first 20 games.

Texas recalled right-hander Kyle Cody and infielder Yadiel Rivera from its alternate training site before the series finale against the Padres.

Andrus, the longest-tenured Rangers player in his 12th season and a week shy of his 32nd birthday, is hitting .184 with no homers and three RBIs this season.

“He was fine last night. He woke up pretty stiff this morning though," manager Chris Woodward said of Andrus before the IL move was announced. “I just told him that I wanted to make sure he’s 100 percent so he can kind of go hard when he comes back and not have to kind of play through and have it linger."

Calhoun suffered a broken jaw when he was hit by a pitch during a spring training game in March, but that injury didn't force him to miss any regular-season games after the start of the season was delayed because of the coronavirus pandemic. He was hitting .172 with eight RBIs in 18 games this season.

Designated hitter Shin-Soo Choo was also out of the lineup Thursday, and Woodward said he could get a couple of days off after struggling through a calf issue.

“He has been grinding kind of through it, so wanted to get him off his feet a little bit,” Woodward said.