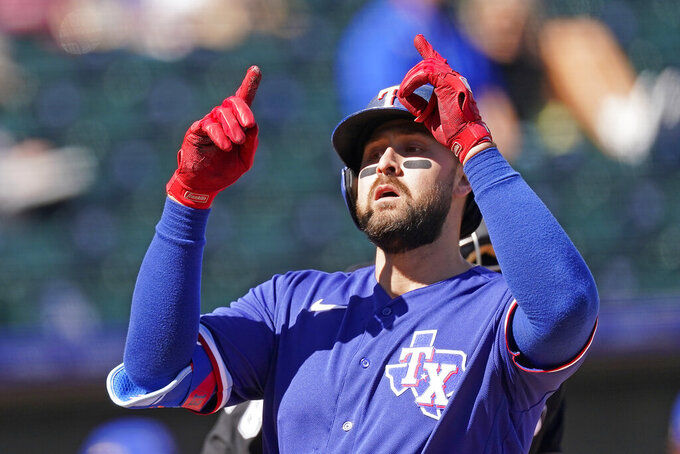 Joey Gallo got to spring training trying to lower the launch angle of his swing, straighten his posture in the box and hit more line drives. The 6-foot-5 Texas Rangers slugger isn't worried about trying to hit home runs.

The long balls have still come, with five homers in his first 14 at-bats.

“I'm really just trying to get back into where I was in 2019, just a relaxed feel at the plate and trusting my stuff,” Gallo said.

That was his All-Star season, when Gallo hit .253 with 22 homers in 70 games, plus a home run on the first pitch in his only All-Star Game at-bat. But a broken bone in his hand sidelined him for the rest of what was shaping up as a breakthrough year after barely hitting .200 in consecutive 40-homer seasons.

Then came 2020, when his .181 batting average was the second-lowest among 142 qualified batters, while hitting 10 homers over 57 games in the season delayed and shortened because of the COVID-19 pandemic. The 27-year-old right fielder missed the first week of the team's summer camp and was isolated from teammates after multiple positive and negative tests for the virus, though he never felt any symptoms.

“There’s kind of a lot of different things that play into it,” Gallo said. “The 60-game season, obviously you’re trying to do a lot in a short period of time. I think that puts a different amount of pressure on you, not really being fully comfortable and having the time to get my swing right. ... I wanted to hit home runs.”

Gallo and the Rangers were also adjusting to their new stadium with a retractable roof, and he was the first player to go deep there during the opening series.

“Last year I got a little caught up in getting under the ball, and kind of maybe got into some bad habits,” Gallo said.

Even without knowing those actual numbers this spring, Gallo knows they are “definitely lower” as he tries to hit balls hard and on a line

"The approach is huge, and trying to stay through the middle and hit line drives. And I think that helps me mechanically as well, because it produces a different type of swing,” he said. “Getting back to being upright, it was more of just when I was swinging at the ball, I was almost crouched ... I wasn’t able to create that backspin and that leverage that I’m 6-5, and I can create. It's a combination of a few things.”

Gallo homered in his first three spring training games and five of the first six. While there were no homers in the last three games before the Rangers had an off day Monday, he had walk in each of those games.

“I’m really proud of him,” manager Chris Woodward said. “Everything he said that we talked about all offseason and into spring training this year, he’s done everything he said he was going to do.”

Even when not going deep, Woodward said Gallo has had good at-bats by working counts and battling back.

Along with his approach at the plate, Gallo has tried to be more consistent in how he works this spring. So often in the past, he overworked and drained himself every time he was on the field.

"I did that a lot last year, I tried to play catch up,” he said. “Now I get in the cage and I do whatever I need to do. I don’t overswing in BP, I get ready for the game and that’s really it. So I think that’s helped me a lot too, just trying to conserve my energy for the game and then taking my best swings there. Consistently work throughout the day, but not overwork.”