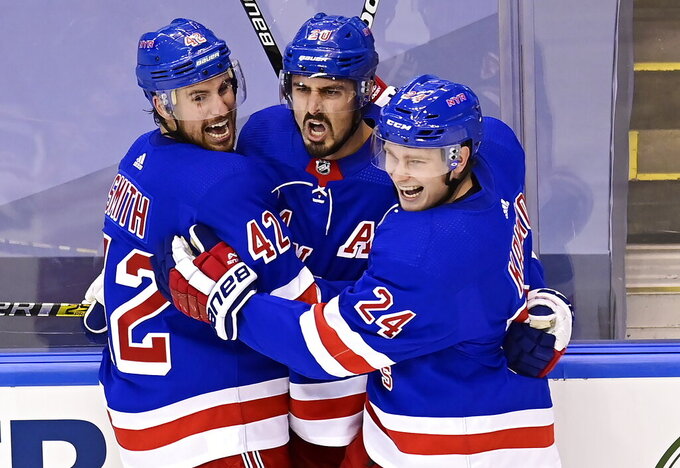 The New York Rangers got a timely assist with their rebuilding efforts.

“Luck is on our side," Rangers general manager Jeff Gorton acknowledged Monday night. “We’re pretty happy with that a few days after coming out of the bubble."

The Rangers were among eight teams that lost in the qualifying round with a chance to claim quite a consolation prize.

Carolina finished off a sweep of the Rangers last week, leading to them boarding buses in Toronto while players and coaches from other teams in the league were drinking coffee at the same hotel.

The Rangers have the No. 1 overall pick for the first time since they selected Andre Veilleux in 1965, four years before the universal draft began.

“Obviously, you don’t get the first pick very often," Gorton said. “This is a special year and it’s exciting."

While the Rangers would rather still be skating in the playoffs, they will have the rights to draft a player for a short- and long-term gain.

Gorton refused to commit to drafting Lafreniere, saying the team wanted to get to know him during an interview process.

There is little doubt, however, that Lafreniere will be taken with the first pick.

In any other year, Lafreniere would have been drafted in June and focused on training for his rookie season.

“It’s been a pretty long last couple of months," he said, adding he has never been to New York.

The league was forced to make a lot of changes after the COVID-19 pandemic paused the season and the lottery was turned into a two-phase process.

The league’s bottom seven teams had their seasons concluded March 12. Those teams also ended up not winning the lottery in June. The Los Angeles Kings landed the No. 2 pick overall.

The winning placeholder team, which became the Rangers, got the top pick despite a 12.5% chance.

NHL Commissioner Gary Bettman said the process was fair because the eight teams that were eliminated from the 24-team field would have had a chance to win the lottery if the pandemic didn't alter the season.

Ottawa ended up with the third selection overall as part of the 2018 Erik Karlsson trade with San Jose along with the fifth pick overall. The league-worst Detroit Red Wings dropped to No. 4 in the first phase of the lottery.

The final 16 spots in the draft, which is tentatively scheduled for October, will be tied to postseason results.

The Rangers also were fortunate in the lottery last year, landing the No. 2 pick overall that they used to select Kaapo Kakko. The Finnish winger finished his rookie season with 10 goals and 13 assists in 66 games.

“We’ve been lucky in the last couple of years to do what we’ve done in the lottery," Gorton said. “It’s a good night for the Rangers fans to be excited."

Lafreniere said his favorite Ranger is Artemi Panarin, who was among NHL scoring leaders with 95 points in his first season with the franchise.

“I can create chances for me or my teammates," Lafreniere said.