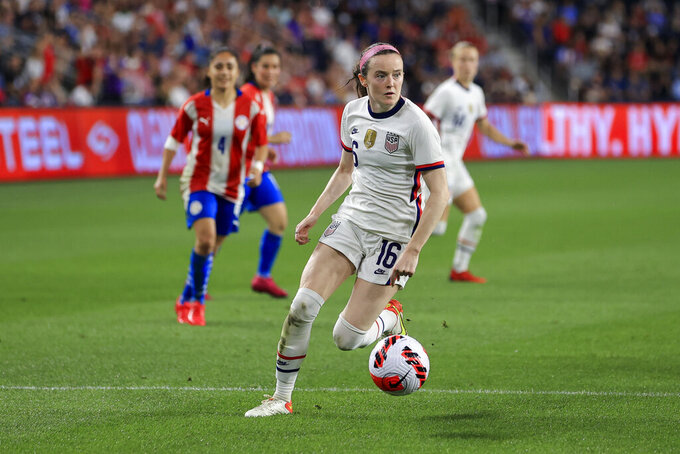 Megan Rapinoe and Rose Lavelle are back with OL Reign.

The National Women's Soccer League club re-signed Rapinoe to a one-year deal while Lavelle's new deal is for two. Terms were not released.

Rapinoe and Lavelle were on the U.S. team that won the World Cup in 2019. Both spent time away from the Reign last season because of the Tokyo Olympics.

Rapinoe has been with the Reign since the team's first season in 2013. She holds the club record for career goals with 40. Last season she appeared in 12 matches, with six goals and three assists.

“Megan joined our club in 2013 already a world-class talent, and over the last decade has done the work on and off the field to transform herself into a global icon who now transcends the sport,” Reign CEO Bill Predmore said in a statement Wednesday. “Beyond the direct impact her talent and creativity bring to the team, her confidence and swagger is infectious — it makes every player around her better."

Lavelle, a midfielder, played in 12 matches for the Reign last season after signing with the team in May. She had a goal and an assist.

Additionally, the Reign announced the re-signing of Lu Barnes to a one-year deal with an option for another year. She has also been with the Reign since 2013, and in 2016 was named the NWSL's Defender of the Year.

The Reign will play matches this season at Seattle's Lumen Field, after playing in Tacoma for three years.