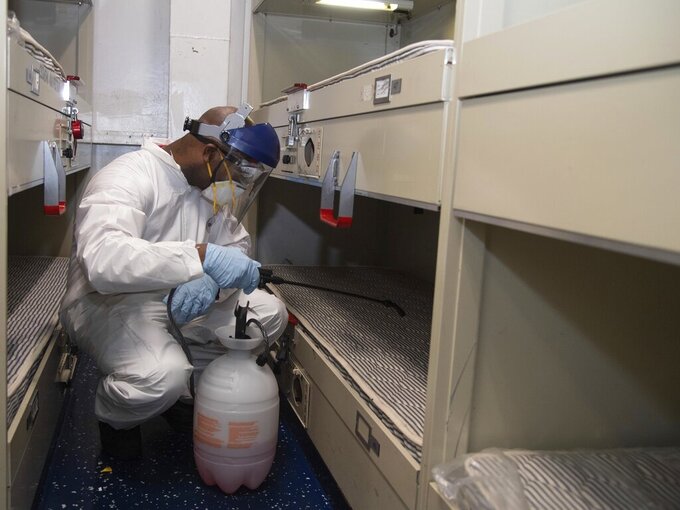 FILE - In this April 12, 2020, file photo provided by the U.S. Navy, U.S. Navy Aviation Ordnanceman Airman Brian Miller, of Mineral Wells, Texas, disinfects a berthing aboard the aircraft carrier USS Theodore Roosevelt (CVN 71) with a multi-surface sanitizer. The U.S. Navy says that after weeks of work, all of the roughly 4,800 sailors on the coronavirus-stricken USS Theodore Roosevelt aircraft carrier have been tested for the virus. The ship has been sidelined in Guam since March 27, moving sailors ashore, testing them and isolating them for nearly a month.(Mass Communication Specialist Seaman Kaylianna Genier/U.S. Navy via AP, File)

BEIJING (AP) — A look at recent developments in the South China Sea, where China is pitted against smaller neighbors in multiple territorial disputes over islands, coral reefs and lagoons. The waters are a major shipping route for global commerce and are rich in fish and possible oil and gas reserves.

The U.S. Navy says that after weeks of work, all of the roughly 4,800 sailors on the coronavirus-stricken USS Theodore Roosevelt aircraft carrier have been tested for the virus. The ship has been sidelined in Guam since March 27, moving sailors ashore, testing them and isolating them for nearly a month.

As of Thursday, 840 crew members have tested positive for the virus, four are in the hospital, and 88 have recovered. None are in intensive care and more than 4,200 have been moved ashore.

The Navy’s top admiral will soon decide the fate of the ship's former captain Capt. Brett Crozier, who was fired after pleading for his superiors to move faster to safeguard his coronavirus-infected crew. The Roosevelt is a key component in the 7th maintenance of strong presence in the Western Pacific and South China Sea to counter China's increasingly bold moves to dominate the region.

U.S. Secretary of State Mike Pompeo has told his Southeast Asian counterparts that China is taking advantage of the world’s preoccupation with the coronavirus pandemic to push its territorial ambitions in the South China Sea.

“Beijing has moved to take advantage of the distraction, from China’s new unilateral announcement of administrative districts over disputed islands and maritime areas in the South China Sea, its sinking of a Vietnamese fishing vessel earlier this month, and its ‘research stations’ on Fiery Cross Reef and Subi Reef,” Pompeo said in a meeting Thursday via video to discuss the outbreak with the foreign ministers of the 10-member Association of Southeast Asian Nations.

Philippine Foreign Secretary Teodoro Locsin Jr. said on Twitter that two diplomatic protests were issued over the declaration of the territory to be part of China's southernmost province of Hainan and the pointing of a “radar gun."

The actions were “both violations of international law and Philippine sovereignty,” Locsin said.

China recently announced the establishment of two districts to administer two disputed groups of islands and reefs in the South China Sea to fortify its claim to virtually the entire waterway, among the world’s busiest. One district reportedly covers the Paracel islands and the other has jurisdiction over the Spratlys, the most hotly contested territory in the strategic waters where the Philippines has a presence on at least nine islands and islets and where China has built fortified man-made islands to assert its own claim.

China's recent actions in the South China Sea are a continuation of its more aggressive approach to asserting its territorial claims but are provoking ever more outrage among its Southeast Asian neighbors, says Greg Poling, director of the U.S. Council for Strategic and International Studies' Asia Maritime Transparency Initiative.

Incidents such as the sinking of a Vietnamese fishing boat in the Paracel island group and the deployment of a Chinese survey ship to Malaysian waters “aren’t exactly new," Poling told The Associated Press in an email.

“But what’s new is the outrage Southeast Asian states feel over seeing this business-as-usual intimidation at a time when they’re struggling with a pandemic that is at least partly Beijing’s fault," Poling wrote.

China’s response to their outcries has been to “double down on nationalism, seemingly in-line with the broader ‘Wolf Warrior' chest-thumping we’re seeing from authorities in Beijing recently," he added in reference to a pair of jingoistic Chinese action films that have become a byword for a muscular Chinese foreign policy.

China will take “all necessary measures to firmly safeguard its sovereignty, rights and interests in the South China Sea," the foreign ministry said on Tuesday, amid a growing outcry over actions widely viewed as aggressive and provocative.

Spokesman Geng Shuang told reporters at a daily briefing that China has protested to Vietnam over its issuing of diplomatic notes to the U.N. secretary general since the end of last month asserting its claims and “attempting to deny China’s sovereignty, rights and interests in the region," Geng.

“Any country that attempts to deny China’s sovereignty, rights and interests in the South China Sea in any form and to reinforce their illegal claims is doomed to fail,” said Geng.