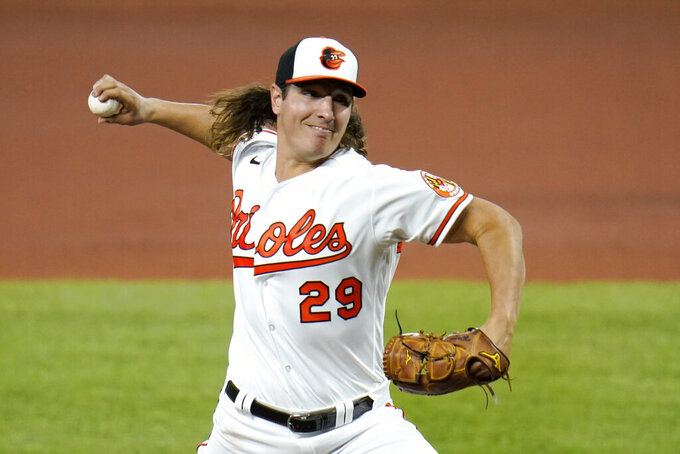 It was the second straight victory for Boston following a nine-game skid. Though the Red Sox are 10 games under .500 and in the AL East cellar, Seattle now owns the worst record in the American League.

Bogaerts hit a solo shot in the third inning and added an RBI single in the ninth before Moreland connected with two on against Miguel Castro.

“Good timely hitting," manager Ron Roenicke said, who summed up the night with a phrase he hasn't used too often this season: “Nice ballgame."

Pat Valaikia homered for the Orioles, who dropped under .500 (12-13) for the first time in nearly two weeks.

Coming off an awful performance against the Yankees (5 1/3 IP, 8 ER), Eovaldi (2-2) was dominant in his longest outing since Aug. 4, 2018. The right-hander struck out six, walked one and allowed only one extra-base hit — Valaika's homer leading off the seventh.

“I know Nate has been after me to go longer," Roenicke said. “He did a great job on all his pitches. He really didn't have any innings to worry about. It's huge for Nate to go those innings and allow the bullpen to rest."

Both of Eovaldi's wins this year are against the Orioles, the other coming on opening day.

“Nate Eovaldi give us a really tough time," Baltimore manager Brandon Hyde said. “That was an unbelievable start. That was Nate being really, really good, throwing every pitch for a strike — the fastball, the cutter, breaking ball, the split —- and being on for seven innings."

Boston used an RBI single by José Peraza and a run-scoring grounder to take a 2-0 lead in the second inning, and Bogaerts upped the advantage with a homer off Asher Wojciechowski in the third.

Wojciechowski (1-3) threw 88 pitches before being lifted with two outs in the fourth.

“I wanted to come out and have a good quality start and get us back on track," the right-hander said. “I wasn’t able to do that, but we’ve just got to flush it."

Baltimore's Anthony Santander extended his career-best hitting streak to 15 games with a first-inning single. He's batting .355 with seven home runs, seven doubles, a triple and 18 RBIs during this torrid run. It's the longest hitting streak by an Orioles since Trey Mancini's 17-game stretch in September 2017. ... Boston leadoff hitter Alex Verdugo stretched his hitting streak to 11 but didn't get an extra-base hit for the first time in eight games.

Red Sox: LHP Darwinzon Hernandez was reinstated from the injured list after missing the first 25 games because of a positive test for COVID-19. “No question, if he's back to what we saw last year it will be huge," Roenicke said. Hernandez had 57 strikeouts in just 30 1/3 innings as a rookie in 2019. To make room on the roster, Boston designated INF Christian Arroyo for assignment. ... J.D. Martinez was back in the lineup, serving as the DH after leaving Tuesday's game with dehydration and sitting out Wednesday.

Red Sox: Roenicke will use Colten Brewer as an opener in Friday night's game, when Boston will seek to win a third straight for the first time this season.

Orioles: John Means (0-1, 10.57 ERA) tries to rebound from the shortest start of his career, 2/3 of an inning Sunday against Washington. The lefty is still trying to get in a groove after missing time with arm fatigue and then dealing with the death of his father.