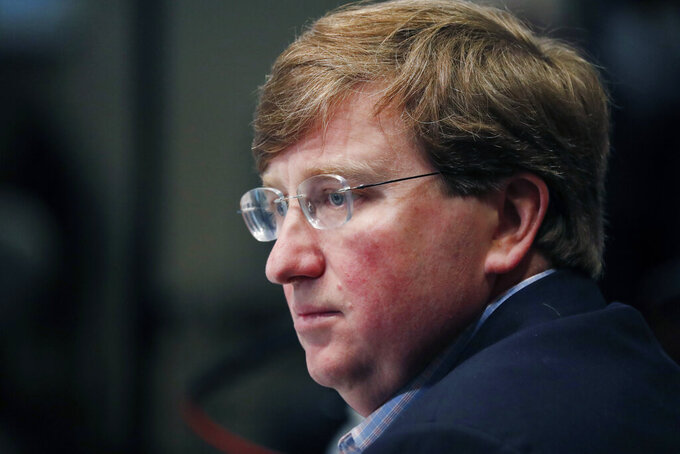 Republican Gov. Tate Reeves listens to a reporter's question during his daily update on the state's response to COVID-19, Monday, May 4, 2020, in Jackson, Miss. (AP Photo/Rogelio V. Solis)

The new order lays out strict social distancing guidelines and sanitation protocols for the tattoo businesses that could begin reopening as early as Friday, he said.

“Our safer-at-home order does not expire until May 25th, but I don’t want to wait if there are things that we can safely do to allow people to return to work," Reeves said, noting that tattoo parlors can reopen with health guidelines similar to those for salons and barbers.

"It is an effort to affirm that there is no such thing as a nonessential business to those workers who rely on its paycheck for food and shelter,” Reeves said.

Reeves also announced that, after discussions with the Mississippi Gaming Commission, they've set May 21 at 8 a.m. as the opening for casinos in the state — under rigorous guidelines for casino workers.

“It won’t be at full capacity and there are social distancing rules in place. But it is a progress for an industry that employs thousands of Mississippians,” Reeves said.

Meanwhile, the state Health Department said Friday that Mississippi — with a population of about 3 million — had at least 10,801 confirmed cases and 493 deaths from the coronavirus as of Thursday evening. That was an increase of 318 cases and 13 deaths from the numbers reported a day earlier; two of the 13 deaths occurred before Thursday but there was a delay in getting information from the death certificates.

The number of coronavirus infections is thought to be far higher because many people have not been tested, and studies suggest people can be infected with the virus without feeling sick. For most people, the coronavirus causes mild or moderate symptoms, such as fever and cough. For others, especially older adults and people with existing health problems, it can cause severe symptoms and be fatal.