Refunds for pandemic scofflaws given initial OK from House 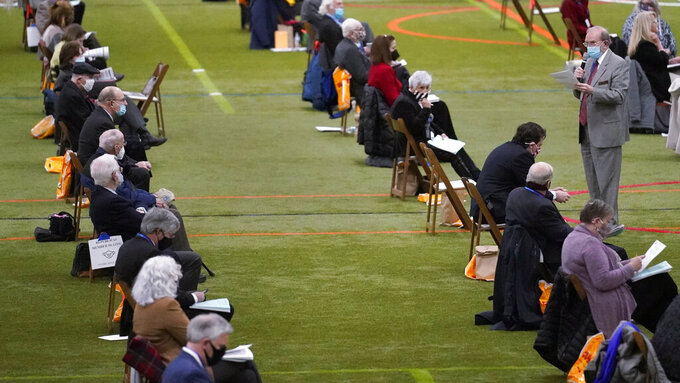 CONCORD, N.H. (AP) — Meeting indoors for the first time since September, the Republican-led New Hampshire House gave preliminary approval Wednesday to a bill that would reverse and refund the fines paid by businesses that have violated emergency orders during the coronavirus pandemic.

Since the start of the coronavirus pandemic, the 400-member House has met several times at the University of New Hampshire ice arena, outside on a UNH athletic field, and — after former Speaker Dick Hinch died of COVID-19 — from their cars in a parking lot. The sessions scheduled for Wednesday and Thursday are being held at sports complex in Bedford that offers more space to spread out than the previous facilities, as well as separate entrances for members from opposing parties.

“Let’s keep this thing as safe as we can,” said House Speaker Sherm Packard, who successfully fought attempts by medically vulnerable Democrats to attend the sessions remotely.

With more than 130 bills on the agenda, one of the first actions members took Wednesday was to give an initial nod to a bill that would refund money to businesses that were fined for violating the governor’s orders on mask use and other restrictions. As of late last month, eight businesses had been fined a total of $10,000.

A general store in Loudon was fined $2,000 in October after being warned more than 10 times that workers must wear masks. That same month, Fat Katz Food and Drink in Hudson was fined $2,000 for holding an indoor karaoke event after being told it wasn’t allowed. Nearly 20 people later tested positive for the virus.

Rep. Chris True, R-Sandown, said the bill would not “make any business whole” but would be a good first step.

“The people and the businesses in New Hampshire have suffered enough, and we must stop adding to their pain,” he said.

Rep. David Meuse, D-Portsmouth, called the bill ill-timed and unwise, and said it would send a message to those who have followed the orders that “your state has chosen to reward people who chose not to follow the rules during the worst public health crisis of the last 100 years.”

In a statement, Republican Gov. Chris Sununu said lawmakers should not be incentivizing law-breaking.

“Our reasonable public health guidelines allowed us to keep our economy open,” he said. “Rewarding the small handful who recklessly thwarted public health and safety after outreach and educational attempts is a complete disservice to the thousands of small businesses who worked tirelessly to keep their employees and customers safe.”

The House voted 188-169 to send the bill to its finance committee for further review. Among those absent for the vote were five of the seven lawmakers who sued Packard last week, arguing that holding in-person sessions without a remote option violates the Americans with Disabilities Act and the state and federal constitutions. A judge on Monday declined to order remote access, saying Packard couldn't be sued for enforcing the House rules.