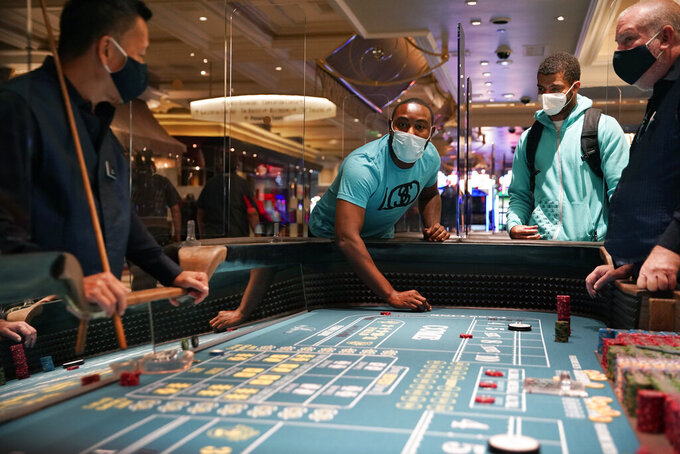 FILE - In this June 4, 2020, file photo, people play craps after the reopening of the Bellagio hotel and casino in Las Vegas. Gambling and travel have been slow to recover since Nevada casinos began reopening June 4 according to monthly reports showing Las Vegas airport passenger numbers down nearly 77% compared with a year ago and a key casino house winnings index down 45.5%. (AP Photo/John Locher, File)

LAS VEGAS (AP) — Gambling and travel have been slow to recover since Nevada casinos began reopening June 4, according to monthly reports showing Las Vegas airport passenger numbers down nearly 77% in June compared with a year ago and a key casinos house winnings index down 45.5%.

The almost $567 million in statewide “gaming win” for June reported Wednesday by the Nevada Gaming Control Board was an improvement from near-zero in April and May due to coronavirus closures.

But the figure represented a dramatic drop compared with February, when casinos reported a third straight month of $1 billion in house winnings.

Board analyst Michael Lawton noted that properties depending on drive-in and local customers saw more business as casino openings continued through June and July.

Lagging midweek hotel bookings due to convention and conference cancellations also affected casino play, Lawton said, along with the absence of spectator draws like concerts, shows and athletic events.

McCarran International Airport in Las Vegas reported handling about 1 million arriving and departing passengers during June, down from more than 4.4 million in June 2019.

Casino closures began in mid-March to prevent people from gathering and spreading the COVID-19 illness. All casinos and many businesses statewide remained closed through April and May.

In June, Las Vegas Strip casinos reported monthly winnings totals down more than 61% compared with a year ago. Downtown Las Vegas decreased 55% and Lake Tahoe-area numbers fell than 20% in a state Gaming Control Board monthly report.

Reno and Sparks casinos showed positive signs, with casino winnings down only 7.4% compared with June 2019. One reporting area, the Virgin River resort town of Mesquite, increased 3% year-to-year, but the figure was comparatively small. Lawton noted that both areas benefited by comparisons with down months a year ago.

Casino taxes are second to sales taxes as a percentage of Nevada’s annual budget, and casino winnings are a key indicator of state fiscal health. Nevada has no personal income tax.

The casinos and airport reports come as state health officials reported the number of confirmed virus cases statewide climbed to 45,806 and there were 21 additional deaths. That pushed the number of known deaths from COVID-19 in Nevada to 780.

Officials say the number of infections could be far higher because studies suggest people can be infected with the virus without feeling sick.

For most people, COVID-19 causes mild or moderate fever and cough that clear up in two to three weeks. Some, especially older adults and people with existing health problems, can face severe illness including pneumonia and death. The vast majority recover.

This story has been updated to correct the projected state budget shortfall is $1.2 billion, not $1.3 billion from earlier estimates.