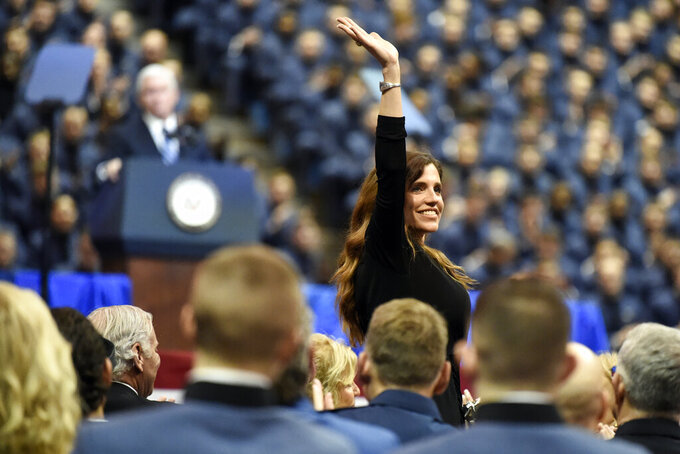 South Carolina state Rep. Nancy Mace, the first woman to graduate from The Citadel, smiles after being recognized by Vice President Mike Pence during a speech at the The Citadel, Thursday, Feb. 13, 2020, in Charleston, S.C. (AP Photo/Meg Kinnard

Mace avoided the divided and bitter Republican primary that caused a rift two years ago that allowed Cunningham to find a path to be the first Democrat to win the seat in more than 40 years.

Mace is the first woman to graduate from The Citadel and has been in the state House for two years.

Cunningham used a combination of opposition to offshore drilling and a personal touch to become South Carolina’s first new Democrat in Congress since 1982 in the district that runs along the coast from Charleston to Hilton Head Island.

Republicans almost immediately made flipping the seat back a 2020 priority.

Mace defeated Kathy Landing, a businesswoman and financial planner who is on the Mount Pleasant Town Council; Chris Cox, the co-founder of Bikers for Trump; and Brad Mole, chairman of the Lowcountry Affordable Housing Coalition.

The general election race promises to be competitive and expensive. Cunningham has $2.6 million in his campaign bank account, and Mace has raised $1.3 million so far.

Only 34 of the 170 members of the General Assembly face a challenger from their own party — or just 20%.

A candidate must get a majority of the votes cast to be nominated. Otherwise, the top two vote-getters must regroup quickly for a June 23 runoff.

Republicans in the 2nd District again picked U.S. Rep. Joe Wilson to be their nominee.

Wilson was the only one of South Carolina’s seven U.S. House members to face a primary opponent.

In November, Wilson will face Democrat Adair Ford Boroughs, an attorney and founder of a nonprofit law firm that works with people who make too much to qualify for free legal services and need affordable representation.

Boroughs has already raised more than $1 million. Wilson has never faced such a well-funded challenger and brings just $830,000 into his campaign during the past two years.

The 2nd District extends from the suburbs of Columbia, through staunchly Republican Lexington County and into Aiken.

Cleveland, a retired insurance salesman, was running for the fourth straight time. Before Tuesday, he had only won the Democratic nomination in 2016, when he was unopposed.

Cleveland will take on Republican U.S. Rep. Jeff Duncan in November in the district in the northwest corner of the state west of Greenville and north of Aiken,.

Moe Brown, who touted his days working in the state Commerce Department under former Republican Gov. Nikki Haley, is the Democratic nominee in the 5th Congressional District.

Brown is a former wide receiver for the University of South Carolina football team and making his first run at political office.

Brown takes on Republican U.S. Rep. Ralph Norman, who is seeking a second full term in the sprawling district that includes the suburbs of Charlotte, North Carolina, northern sections of the Interstate 85 corridor and areas around Sumter.

Teacher Melissa Watson has beaten a longtime state House member to win the Democratic nomination for the 7th Congressional District.

Watson barely squeaked above the 50% threshold to avoid a runoff in the three-candidate race.

She will face incumbent Republican U.S. Rep Tom Rice, who is seeking a fifth term in the district anchored by Florence and Myrtle Beach.

Watson defeated state Rep. Robert Williams, who hedged his bets by also running unopposed for the state House seat he has held since 2007. Her other opponent was retired U.S. Postal Service worker William H. “Cowboy” Williams.

Watson also touted herself as a single mother who promised to work for economic development, education and infrastructure.

Tuesday's primaries may have been low-key, but long lines were still seen at several precincts. Also dozens of poll workers, many of them new hires because of COVID-19, pulled up the wrong ballots.

The state Democratic Party said hundreds of discrepancies were reported to its officials. Poll workers pulled up ballots without all local races or candidates missing. Some poll managers tried to persuade voters to pick a different party’s ballot, state Democratic Party Chairman Trav Robertson said in a statement.

Long lines formed at some precincts, especially in Richland County, as polling places were combined because many longtime workers at sites didn’t take an assignment this year because of concerns of contracting the novel coronavirus.

“There are problems in every corner of the state,” Robertson said.

Against the backdrop of the COVID-19 pandemic, lawmakers decided to allow no-excuse absentee voting by mail.

One South Carolina House incumbent shunned by his own party won his primary.

State Rep. Jimmy Bales, in office since 1999, lost the Democratic primary to Jermaine Johnson, who was the South Carolina Campaign Chair for Andrew Yang's 2020 presidential campaign.