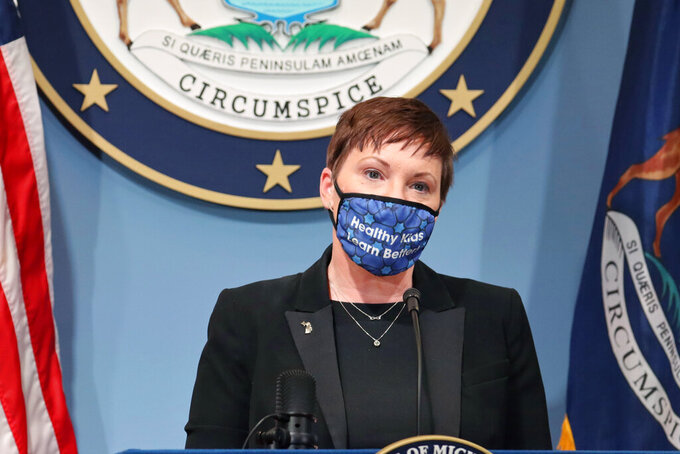 FILE— In this Thursday, Feb. 4, 2021 file photo, provided by the Michigan Office of the Governor, Elizabeth Hertel, director of the state health department addresses the state. Republican senators critical of Gov. Gretchen Whitmer's handling of the coronavirus pandemic are weighing whether to reject her appointee Hertel to run the state health department, which has issued orders restricting business capacity and gathering sizes to limit COVID-19's spread. (Michigan Office of the Governor via AP)

LANSING, Mich. (AP) — Republican senators critical of Gov. Gretchen Whitmer's handling of the coronavirus pandemic are weighing whether to reject her appointee to run the state health department, which has issued orders restricting business capacity and gatherings to limit COVID-19's spread.

Elizabeth Hertel took over the Department of Health and Human Services on Jan. 22, the day Robert Gordon abruptly resigned. Her appointment will stand unless the GOP-controlled Senate blocks it by March 23. No affirmative vote is required.

Hertel's nomination is drawing considerably more attention than any in years. She has spent hours answering questions in two Advice and Consent Committee hearings and may return for a third meeting this week.

“We need to decide if the Whitmer-Hertel era at DHHS will be any different than the Whitmer-Gordon era,” said Sen. Aric Nesbitt, a Lawton Republican who chairs the panel. “After two hearings, that is a legitimate concern that I have. There is a failure to recognize or acknowledge mistakes, and there are no clear explanations of the science and data behind these unilateral, seemingly endless and ever-changing orders.”

About a third of the 20-member GOP caucus has publicly opposed Hertel, voicing long-running frustrations with pandemic restrictions and concerns that Hertel represents more of the same. But Republicans would need to be in near lockstep — which appears unlikely — because Democrats support her.

Hertel, 42, has cachet with several GOP senators from her past jobs in the Legislature with the House Republican Policy Office and former Rep. Bruce Caswell, a Republican. Before being elevated to DHHS director, she had been a chief deputy director under Gordon for two years and, from 2013 to 2016, held top positions in the department during Republican Gov. Rick Snyder's administration. She is married to Democratic Sen. Curtis Hertel Jr. of East Lansing.

An array of hospital, insurance and other health groups are backing her nomination. So is the Michigan Restaurant & Lodging Association, even though it contends that the Whitmer administration has overstepped with stricter rules than in surrounding states.

Rejecting Hertel would leave Republicans guessing whom Whitmer would name as her successor. It would be an unprecedented move and further sour their already fractured relationship with the governor.

State Archivist Mark Harvey said he was unaware of the Senate ever blocking a governor's Cabinet nominee, but cautioned it is difficult to be 100% sure. To protest not having more input into virus restrictions and a clear, metric-driven reopening plan, Republican senators this year have turned down 18 Whitmer appointees to less-prominent posts, such as university boards and other state boards.

During her testimony, Hertel has walked the line between defending the state's authority to protect public health and save lives while also acknowledging some missteps. She has said agency leaders should have communicated better both internally and with the Legislature and other groups about COVID-19 policies.

She also has apologized for not publicly announcing a longer-than-usual extension of restaurant restrictions the same day she announced contact sports could resume. The 25% capacity limits were later eased to 50%.

Hertel has stood by the incremental approach to easing business and gathering limits, noting — as Whitmer has many times — the need to ensure infections do not spike. She also has said that, in hindsight, the state maybe should have acted sooner in the fall to avoid a second surge in cases, hospitalizations and deaths.

A spokesman for Republican Senate Majority Leader Mike Shirkey of Clarklake said the entire caucus will soon meet to discuss the appointee once is it decided if a third hearing will be scheduled.

Senate Minority Leader Jim Ananich, a Flint Democrat and member of the Advice and Consent Committee, said Republicans would send a “terrible message” if they blocked Hertel “to achieve a political goal.”

“Our state is lucky to have someone as qualified, capable and dedicated as Director Hertel at its helm, especially during this global health crisis," he said. “Her resume is a mile long and she’s proven to be extremely successful working with Republicans and Democrats, in the private and public health sectors, in both policy and administration.”