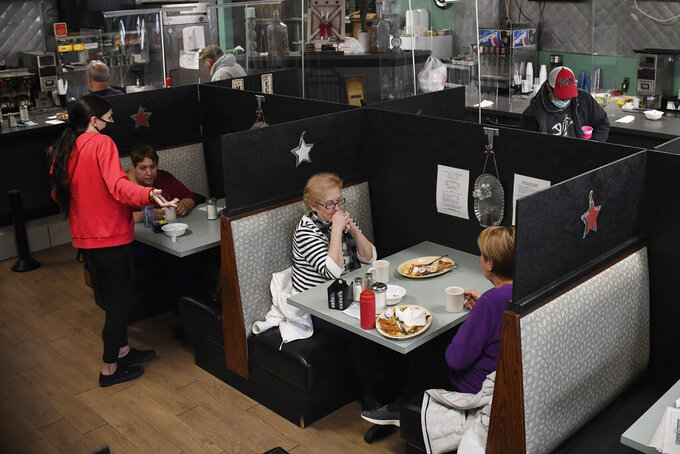 Server Amber Beecher, left, talks with a customer at Rodd's Restaurant, Thursday, Dec. 10, 2020, in Bristol, Conn. Small restaurant owners in Connecticut are taking out loans, forgoing their paychecks and charging on credit cards to remain in business as the coronavirus pandemic continues. But with winter putting an end to indoor dining and increased cases scaring off customers, some are uncertain what other financial tricks they can turn to. (AP Photo/Jessica Hill)

For the past 27 years, the husband-and-wife owners of the Water Street Cafe have worked to make their restaurant a beloved establishment in the seaside borough of Stonington, Connecticut. But less than a year after the coronavirus hit, they're just trying to keep the doors open as their financial options dwindle.

Now with winter weather putting an end to indoor dining as the rate of COVID-19 infections heats up, they’re bracing for the possibility that all indoor dining in Connecticut might close again.

“It’s very overwhelming,” said Stephanie Hayes-Houlihan, who has considered selling the couple's house and moving above the restaurant. “My husband and I are in our 60s ... We're just short of a few years of retiring. If we were to lose our restaurant, it means we have to go out and look for work at our age.”

More than 600 restaurants have closed statewide since the pandemic began, according to Scott Dolch, executive director of the Connecticut Restaurant Association, who warns the final number could be in the thousands without more government help.

Many owners, especially those with small restaurants, worry their businesses might not make it through the winter after they've already burned through personal savings, forgone paychecks, taken out loans and run up credit card debt. That's in addition to slashing staff and hours.

“I will just be blunt. This has been the most difficult time our industry, right now, has faced since this pandemic started. And it’s extremely scary,” he said during a recent conference call. "They don’t know what tomorrow brings for their industry.”

Should indoor dining close again, Hayes-Houlihan said the “best-case scenario” for her restaurant, which she co-owns with husband and chef Walter Houlihan, is to weather the coming months by relying on take-out sales, donations — one customer left a $5,000 check on her car windshield — and any government assistance that might become available.

The restaurant association is pushing for a greater share of the state's federal COVID-19 relief funds to go toward larger grants to restaurants. Connecticut is offering grants of up to $5,000, which Dolch said is not enough.

Some frustrated owners have gone to court. On Friday, the state Supreme Court heard arguments in a lawsuit filed by a Milford pub owner challenging Gov. Ned Lamont's authority to close bars, which have been shuttered throughout the pandemic. A group of small business owners, including two restauranteurs, have made similar arguments in a separate lawsuit.

Lamont, a Democrat, said he understands the “incredible distress” restaurants are going through, and has so far allowed indoor dining to remain at 50% capacity, despite demands from medical professionals to end it. But it's questionable whether the state will have the money to provide larger grants.

Gina Pellrine, who has owned Rodd's Restaurant in Bristol since 1988, applied for the $5,000 state grant. While she'll be grateful to get the money, it's not enough. Her electric utility bill alone is more than $2,500 at her small diner, where net income has plummeted 44% compared to 2019.

“The money’s not coming in. I’m scrimping by to pay my landlord. And I have to morally. It’s just wrong not to,” she said.

With her wait staff cut back, Pellrine arrives at 2 a.m. to get prep work done before customers arrive. She stopped taking a paycheck and making monthly retirement deposits when the pandemic first hit. She has since refinanced her home mortgage and charged supplies to her credit card. Pellrine also took out a $80,000 loan for emergencies and is considering selling or renting out her vacation home if things get worse.

At this point, she's unwilling to give up, even if she's forced to rely on her takeout and prepared meals business.

“I have to feed the community,” she said. "People rely on me.”

In Storrs, Nancy McKenney, co-owner of Hops 44, said business has been “horrendous” in recent weeks. Last Sunday, there were only seven tables of patrons all day in the brew pub that has about 20 tables indoors.

McKenney and her husband, who both have jobs apart from the restaurant, dipped into their savings to help cover costs. But McKenney isn't willing to do much more than that.

This story has been updated to correct the name of the restaurant in Bristol. It is Rodd's Restaurant, not Rod's Restaurant.