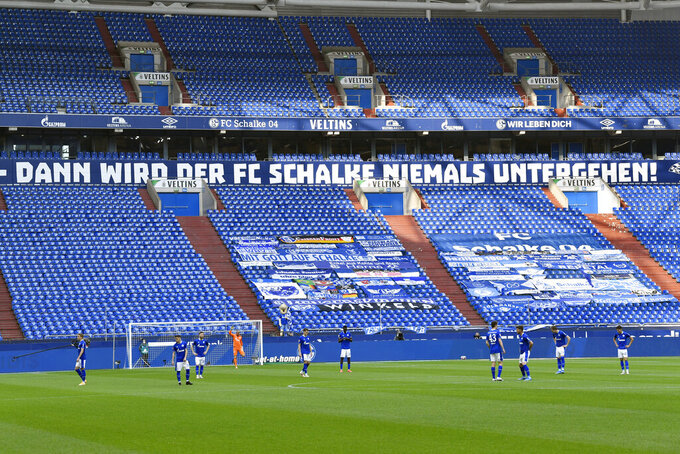 Schalke players get set before kickoff in the German Bundesliga soccer match between Hertha BSC Berlin and FC Schalke 04 in Gelsenkirchen, Germany, Wednesday, May 12, 2021. The banner in the background reads in German, Schalke will never go down. (AP Photo/Martin Meissner, Pool)

DÜSSELDORF, Germany (AP) — It's a new start at the end of the German soccer season.

For the first time since October, fans will be back in the stands for a Bundesliga game on Saturday when up to 2,000 spectators will be able to watch Union Berlin play Leipzig.

Germany was the first major European league to return amid the pandemic in May 2020 but the stadiums were silent, except for a brief trial early this season. That was quickly abandoned when coronavirus infections increased around the country.

Fans are the emotional heart of German clubs and, in most cases, supporters have majority control of their clubs in the boardroom, too. Union is hoping its famously loud fans — even if only a few of them — will help the team qualify for European competition for the first time.

Bayern Munich has won two Bundesliga titles, the Champions League and the German Cup since the pandemic began, all without celebrating any of them with fans at the Allianz Arena. Falling infection rates in Bavaria mean the club is allowed 250 guests for the season-ending game against Augsburg. Bayern is inviting 100 health workers and holding a lottery for club members, with the proceeds going to charity.

That allows an emotional sendoff for three long-serving players — David Alaba, Jerome Boateng and Javi Martinez — who are leaving at the end of the season, along with coach Hansi Flick. It's also an audience for Robert Lewandowski if he can score his 41st Bundesliga goal this season to break the single-season record. It would also be a welcome sign for UEFA, which is demanding the Allianz Arena has at least some supporters when it hosts Euro 2020 matches next month.

Cologne held talks with the city government about having 500 fans when it hosts relegated Schalke in a bid to avoid dropping out of the top division, but that fell apart when local infection rates rose. The other two teams at risk won't have fans either. Sixteenth-place Werder Bremen will host Borussia Mönchengladbach and 15th-place Arminia Bielefeld will visit Stuttgart in empty stadiums.

Further down the divisions, the return of fans means tough decisions. Holstein Kiel was allowed to have supporters at Sunday's game as it bids for promotion to the Bundesliga for the first time. The club refused.

“Professional soccer should not claim a special role for itself in society,” club president Steffen Schneekloth said Monday, adding the refusal was a gesture of solidarity with other sports clubs and event organizers who can't have an audience.

The biggest crowd of the weekend will be in the third division. The mayor of the northern city of Rostock is framing the decision to allow up to 7,500 people at Hansa Rostock's stadium as a public safety measure. The club will be promoted with a win.

“Do we want a lot of scattered little parties or one big one with clear rules? I support the big party in the stadium. It means less risk,” Mayor Claus Ruhe Madsen told the local Ostsee Zeitung newspaper on Monday.

Even when fans are excluded from the stadium, mass gatherings have become a regular sight as the spring weather improves. Most are good natured, with fans lining the streets to welcome victorious teams home, but two incidents turned violent.

Schalke supporters attacked players and staff last month when they returned in the team bus from a game which ensured relegation. Last week, police detained 40 people after Dynamo Dresden fans pelted officers with bottles, stones and fireworks while celebrating promotion.

With Germany's coronavirus vaccination campaign well under way, fans may return in larger numbers when the new season starts on Aug. 13.