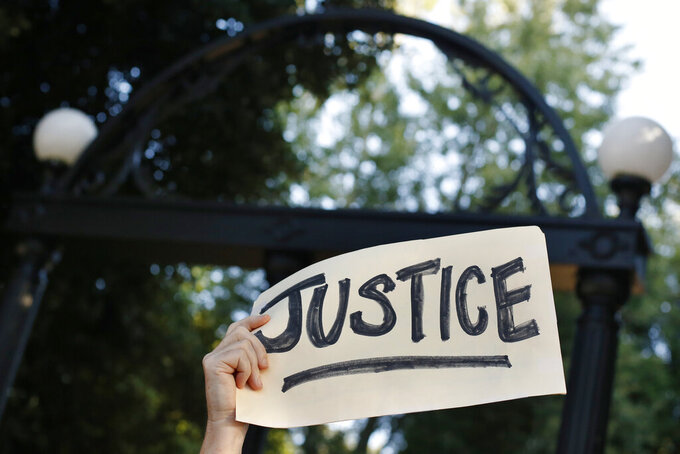 FILE - In this Sept. 4, 2020 file photo, protesters gather at the University of Georgia Arch for the Davenport-Benham Black Law Student Association march in downtown Athens, Ga. The University of Georgia has reversed itself and now says it wants to host an early voting precinct on campus after widespread pushback. The change in position came after the university had announced it would not allow voting to take place in the typical location in the student center because of concerns about COVID-19 transmission. (Joshua L. Jones/Athens Banner-Herald via AP, File)

ATHENS, Ga. (AP) — The University of Georgia has reversed itself and now says it wants to host an early voting precinct on campus after receiving widespread pushback.

The change in position came after the university had announced it would not allow voting to take place in the typical location in the student center because of concerns about COVID-19 transmission.

UGA Votes, the group seeking to host an on-campus precinct, said Wednesday that it had proposed using Stegeman Coliseum, but that after initial approval by the athletics department, using the basketball arena as a site was “ultimately deemed infeasible.”

But by Thursday, after a social media outcry, the university said it had offered the arena to local and state officials as an early voting site.

“We look forward to working with state and local election officials to facilitate on-campus voting in this indoor venue, which is large enough to support safe social distancing,” the university said in a statement.

Critics had pounced on the university's initial refusal of an on-campus site on social media, saying it was hypocritical that the 39,000-student university is allowing some fans to attend football games, but couldn’t find room for voting.

“COVID-19 must never be used as an excuse to limit voting access, including on college campuses,” wrote 2018 Democratic gubernatorial candidate Stacey Abrams, who now leads voting rights group Fair Fight Action, in a tweet on Wednesday. “Early voting at the University of Georgia has increased opportunity for participation among students in the past, and they should be safely given the same access this year.”

A Democratic presidential candidate has not won in Georgia since 1992, but the state has become increasingly competitive and both President Donald Trump and Democrat Joe Biden have spent advertising money there recently. Athens-Clarke County is also the scene of contested races for General Assembly and district attorney.

UGA initially tried to defend itself, arguing in a tweet posted Wednesday that officials feared long lines and insufficient space in the student center, instead saying the university would provide a shuttle bus to voting locations including one in downtown Athens, which borders one side of campus.

“Those comparing this matter to a football game should be able to recognize that football games will be played outdoors but we will still require social distancing by substantially reducing capacity in the stadium,” the university wrote initially.

That only intensified criticism, with opponents of the university's decision suggesting that the outdoor concourse of Sanford Stadium could be one socially distant, outdoor location. The stadium is across the street from the Tate Student Center.

Three hours after the first tweet, the university reversed itself late Wednesday, writing that “While the university cannot host a safe site at the Tate Center, the institution remains more than willing to make a safer site, such as the coliseum, available” if the Georgia Secretary of State and Athens-Clarke elections officials approve.