Reynolds implores Iowans to get shots as infections inch up 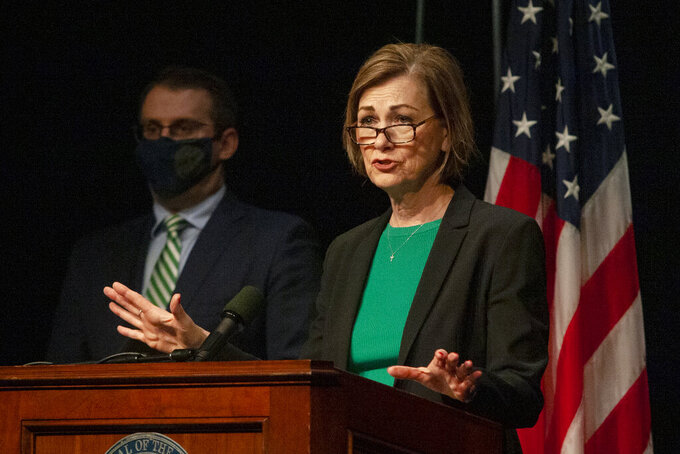 Gov. Kim Reynolds speaks during her first news conference since the state surpassed one million administered doses of the COVID-19 vaccine, Wednesday, March 17, 2021, in Johnston, a suburb of Des Moines, Iowa. Reynolds said Wednesday that all Iowa residents will be eligible for coronavirus vaccinations on April 5 as long as supply projections are met. (Olivia Sun/The Des Moines Register via AP)

JOHNSTON, Iowa (AP) — Facing an uptick in new coronavirus cases and a hesitancy among a significant portion of the population to get the vaccine, Iowa Gov. Kim Reynolds on Wednesday continued her push to persuade Iowans that getting a shot will help return life to normal.

In early March, hospitalizations of people infected with the virus had dropped as low as low as 161 but began edging up again mid-month and have been around 200 in recent days. The seven-day percentage of positive tests had been well below 5% for much of the month but reached 5% again on Tuesday and has been hovering just below that level.

A recent survey conducted by the U.S. Census Bureau indicates 45.5% of the nearly 1.5 million Iowa adults who have not yet been vaccinated say they definitely will get a shot when they’re eligible. That leaves about 800,000 adults who will not commit to a vaccination, roughly 36% of the total adult Iowa population.

Reynolds sidestepped a question at her Wednesday press conference about why she believes so many Iowans are hesitant to get the vaccine. Instead, she answered that in visits to clinics, she sees many people eager to get a shot.

“The response that I see from Iowans that are there getting the vaccine, there is a pep in their step. They are so grateful to have it. They are excited to reconnect with family members. They really believe that this is an opportunity to get things back to normal,” she said.

Iowa Department of Public Health Director Kelly Garcia said one-third of the reported virus activity over the past week has been among Iowans between the ages of 18 and 29.

"A part of the increase in positive cases that we're seeing has to do with spring break travel and an increasing number of variants which are circulating in Iowa and across the nation and they are more contagious," she said.

Reynolds said the administration of President Joe Biden has promised to ramp up vaccine distribution to states, and Iowa is expected to get nearly 161,000 doses next week, the largest weekly supply so far.

That will enable the state to open up vaccination appointments broadly to all adults beginning Monday, although a few counties already have expanded their vaccination eligibility.

Reynold said the expanded vaccine allocation includes about 45,800 doses of the single-shot Johnson & Johnson vaccine, some of which will be used to vaccinate staff and students at three colleges that have said they're ready for mass vaccination clinics. They are Dordt College in Sioux Center, the University of Iowa and the Des Moines Area Community College.

A mass clinic also has been scheduled for downtown Des Moines for Saturday for Iowans 65 and older and those between age 16 and 64 with underlying health conditions.