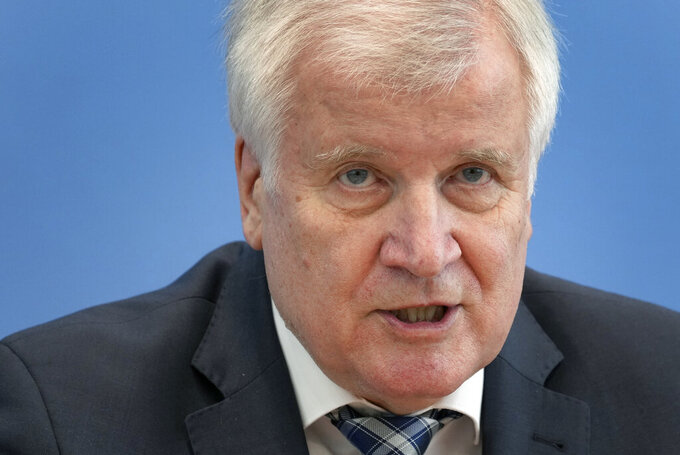 BERLIN (AP) — Authorities in Germany said Tuesday that the number of far-right extremists in the country increased last year as neo-Nazis sought to join protests against pandemic-related restrictions.

The minister added that it was worrying how the protesters often didn't distance themselves from the far-right extremists marching among them.

According to data published in an annual report by the Federal Office for the Protection of the Constitution, the domestic intelligence agency known by its German acronym BfV, some 40% of the far-right extremists in Germany are believed to support the use of violence for political ends.

BfV chief Thomas Haldenwang said the so-called “New Right” was to blame for much of the recent radicalization. He called its supporters “intellectual arsonists” and said his agency was closely watching the movement, parts of which have been linked to the far-right Alternative for Germany party.

“The New Right provides the ideological justification for the actions of violent far-right extremists,” Haldenwang told reporters in Berlin. “They preach from morning till evening that there is a big population replacement occurring in Germany and that this needs to be resisted.”

Josef Schuster, the head of Germany’s Central Council of Jews, said the latest BfV report showed “the shocking extent to which the threat to Jewish life in Germany has further grown.”

Schuster urged security agencies and judicial authorities to act against antisemitism and extremism, while keeping a close eye on right-wing populists.

Schuster accused Alternative for Germany and some media of inflaming an already tense situation ahead of the country's national election in September.

The BfV report also noted an increase in the number of left-wing extremists last year compared to 2019, though a smaller share were considered supportive of violence.

The number of Islamists remained stable last year, according to the report.