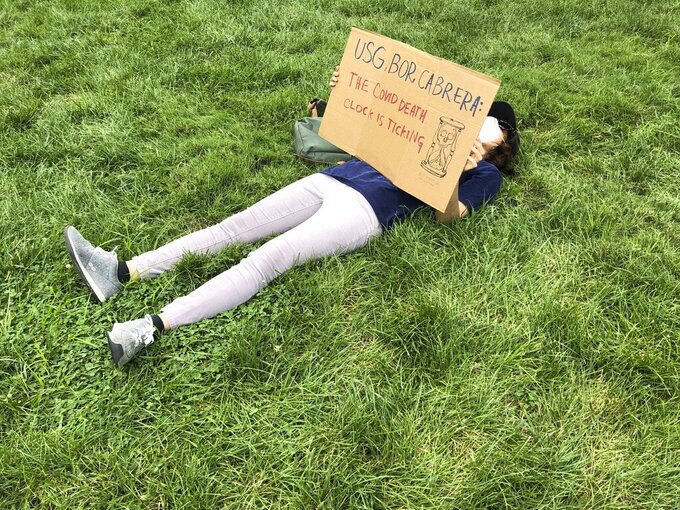 ATLANTA (AP) — With more than 3,000 public university students and employees across Georgia testing positive for COVID-19 since Aug. 1, some schools are taking action to slow the spread of the respiratory illness.

Georgia Tech is encouraging students to convert to single rooms, moving out roommates over coming weeks to reduce exposure to the coronavirus. Both Georgia Tech and the University of Georgia announced they are renting more off-campus rooms to isolate or quarantine students who have been infected or exposed to the virus.

UGA reported 821 new infections for the week ended Saturday, a number that President Jere Morehead said Wednesday is “concerning.” He urged students to "continue to make every effort to prioritize their health and safety by taking the proper steps to avoid exposure to this virus.

Around 4% of all cases recorded in Georgia in the last month have been associated with university campuses, according to figures kept by The Associated Press. The number could be higher because some schools, including the state's largest — Georgia State University — are not posting full reports publicly.

The rising campus infection numbers come as new cases in the rest of Georgia decline. The total number of cases rose to near 275,000 Wednesday, according to state data, but the average number of cases has fallen below 2,000 a day.

That still represents a fast rate of spread — Georgia has recorded the seventh-highest number of new cases per capita in the last 14 days, but is slowly falling.

Newly recorded deaths statewide remain high, though, as the toll of an infection spike that peaked in July continues to be reckoned with. Total fatalities rose to 5,795 on Wednesday, and the state has recorded 946 deaths in the last 14 days, the largest sum on record, although death reports can be delayed for weeks.

Georgia Southern University and Georgia College & State University also continue to post high infection numbers. Each has confirmed more than 500 infections, meaning a larger share of their student body has been infected than at either Tech or UGA. Georgia has seven counties that are in the top 50 nationwide for most cases per capita in the last 14 days. They include No. 24 Baldwin, which hosts Georgia College; No. 43 Lumpkin, which hosts the largest campus of the University of North Georgia; and No. 45 Bullock, which hosts the largest campus of Georgia Southern.

The Georgia Southern chapter of the American Association of University Professors released an open letter Wednesday asking for the university system to give Georgia Southern permission to move all classes online, citing the high infection rate in the Statesboro area.

“We ask the administration to take this action to demonstrate its stated commitment to prioritize the health and safety, not only of the university community, but also the broader Statesboro, Savannah, and Hinesville communities,” the professors wrote.

Georgia Tech President Angel Cabrera initially announced Monday that the school would mandate that all students live one to a room, a stance the school softened Tuesday to say it would give students that option.

“Our data shows that living in separate rooms can reduce the risk of infection,” Cabrera wrote, saying students won't be charged extra and will be given time and help to move.

Georgia Tech has been encouraging students to get tested weekly, whether or not they have symptoms. Cabrera said the university may block access to certain buildings for people who don't get tested.

"We will continue to assess the need for this action and will communicate details if it's necessary.

Cabrera also said that fraternities had canceled all official events for the semester and that Georgia Tech is adding more contact tracers, redeploying six full-time employees and adding 40 trained volunteers.

Cabrera said the university is renting additional hotel space for those who are infected to isolate and those who have been exposed to quarantine.

He also asked students not to go home over the Labor Day holiday weekend and said Georgia Tech would suggest safe activities for those remaining on campus.

UGA shows rising positivity rate on surveillance tests, rising to 5.4% last week from 2.4% the week before and 0.4% the first week of class. The tests are not a random sample, but it suggests the number of people on campus who are infected but asymptomatic may be rising quickly.

UGA said it has nearly 400 rooms to house people who need to quarantine or isolate, including more than 300 in current or former hotels, and is “finalizing arrangements” for another 100 rooms from another private source.