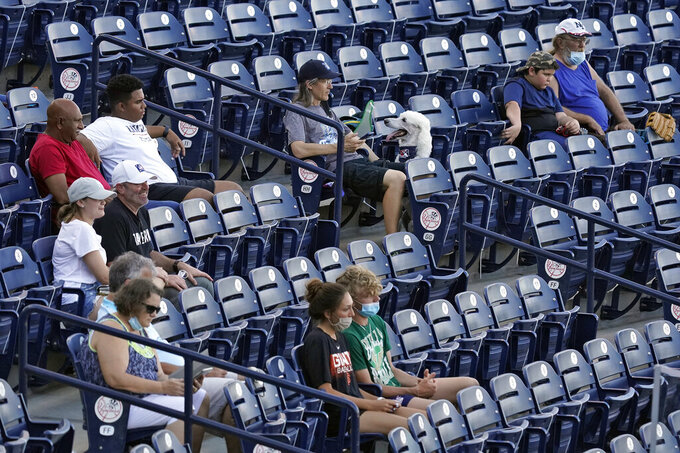 Fans are socially distanced during the first inning of a Low A Southeast League baseball game between the Dunedin Blue Jays and the Tampa Tarpons at George M. Steinbrenner Field Tuesday, May 4, 2021, in Tampa, Fla. Minor league baseball is starting back up after having their season canceled last year by the pandemic. The Tarpons were welcoming dogs at the game. (AP Photo/Chris O'Meara) 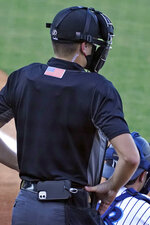 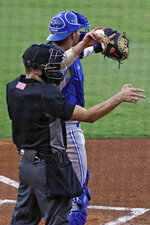 Never mind that a computer was making the calls.

Didn't matter on Tuesday night as the Tampa Tarpons took on the Dunedin Blue Jays. Because from Omaha to San Jose to the Jersey Shore, minor league baseball was back after a lost season, with fans, crazy promotions and even those robot umpires.

The Tarpons found themselves already in the dog days on opening day. They hosted the Dunedin Blue Jays on “Tail Waggin’ $2 Tuesday” where fans could bring their pooches to the park for two bucks.

New York Yankees vice president Vance Smith greeted and talked with fans as they entered the ballpark to see the Class A affiliate, calling it a homecoming after a minor league season wiped out by the coronavirus pandemic.

“Excited, but also hesitation,” Smith said. “We’re following some protocols, but we’re happy to have baseball back. That’s the one thing I’m excited about because it’s been 18 months since we’ve Tarpons baseball and minor league baseball.”

The scent of hot dogs — the kind with mustard, not the mutts — signaled a sense of normalcy. The masking and social distancing showed there was still a way to go.

Side attractions like Speed Pitch are gone and concessions are cashless but the games were back, finally.

“Super excited to be kicking off the minor league season,” Yankees senior director of player development Kevin Reese said. “I was one of many who were not too confident that this was going to happen in a timely fashion.”

There was a cheer when the PA announcer said, "Are you ready? Let’s welcome your 2021 Tampa Tarpons,” as the Yankees prospects took the field.

“It's a lot of fun going out there and being able to watch these guys do what they love doing,” said Tampa manager David Adams, who played 43 games for the big league Yankees in 2013. “I think everyone will agree with that.”

But there are significant changes since Tampa and the minors last played in September 2019.

A reorganization by Major League Baseball saw the long-standing High-A Florida State League, in which Tampa played for a quarter-century, become the Low-A Southeast League. Some cities lost their teams entirely as the overall number of affiliates was cut from 160 to 120.

And after experiments in the independent Atlantic League and the Arizona Fall League, the Southeast League is the next proving ground for the automatic ball-strike system.

Devier got a roasting after Blue Jays batter Zach Britton took those two pitches for balls.

"I thought it was pretty good," Tampa catcher Austin Wells said of the automatic system. “There were a couple calls here and there that me and the umpire thought were maybe strikes and balls, but it's a good opportunity to work on different things.”

Right before the first pitch, Wells helped Devier adjust part of the system on the back of his belt.

“I was rigging it in our favor, actually,” Wells said with a laugh.

Wells, taken by the Yankees in the first round of the 2020 draft, hit a two-run homer and had an RBI double in the Tarpons' 11-7 win that took almost four hours — long games, some things never change.

The Tarpons did fist-knocks after the victory and left the field with the PA playing Frank Sinatra's “New York, New York.”

“It was the best feeling in a long time being able to play under the lights again,” Wells said.

Dunedin is following the lead of its nomadic parent team. With the Toronto Blue Jays playing big league games at TD Ballpark in Dunedin through at least May, the D-Jays are scheduled to play their first 24 games away from home.

That follows the lost 2020 season and the 2019 campaign where they played home games in nearby Clearwater while the Dunedin ballpark underwent a major renovation project.

“The other uniqueness we’re dealing with this year is there is a shortened minor league season,” Blue Jays director of player development Gil Kim said. “There’s a lot of planning and processing that we can do a little bit differently this year.”

The Dunedin Blue Jays' Twitter site summed things up when posting the lineup:

“First lineup graphic in almost two years! We are so back. Happy Opening Night."

NOTE: The ball used in the game was the official minor league ball with the signature of former MILB president Pat O'Connor, who retired last year as MLB was working on redoing the minors.