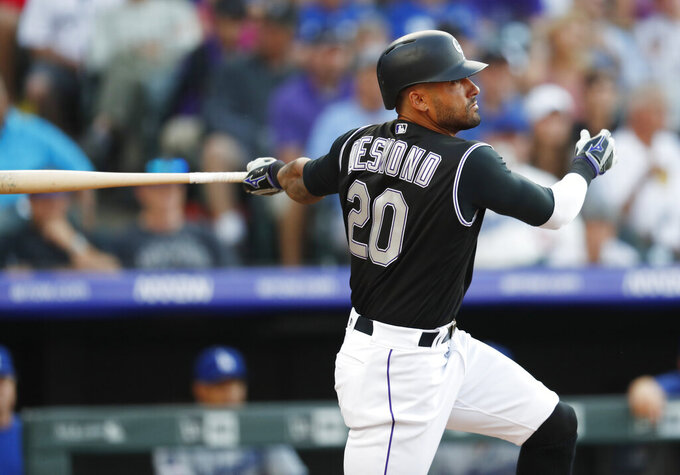 FILE - In this July 29, 2019, file photo, Colorado Rockies' Ian Desmond follows the flight of his triple off Los Angeles Dodgers starting pitcher Kenta Maeda in the second inning of a baseball game in Denver. Desmond plans to sit out this season to be with his family and help the youth baseball program in his hometown in Florida. The 34-year-old Desmond wrote on Instagram that the “COVID-19 pandemic has made this baseball season one that is a risk I am not comfortable taking.” (AP Photo/David Zalubowski, File)

DENVER (AP) — Colorado Rockies general manager Jeff Bridich says he supports Ian Desmond’s decision to sit out the 2020 season to focus on his young family and help rejuvenate youth baseball in his hometown in Florida.

Bridich says he had a pair of recent conversations with the 34-year-old outfielder who announced his decision in a lengthy and heartfelt Instagram post Monday night.

Desmond wrote that the “COVID-19 pandemic has made this baseball season one that is a risk I am not comfortable taking.” The biracial slugger also mentioned a myriad of issues within baseball, including sexism, homophobia and socioeconomic concerns, as well as the racial reckoning that emerged after George Floyd’s death while in police custody in Minneapolis sparked protests around the world.

“The conversations with Ian felt the exact same that his written words feel to me,” Bridich said, “which is from the heart and honest. ... I did not know that he was going to write something as thoughtful and as comprehensive as (he did) but I’m not surprised.”

Opting out this summer doesn’t affect his 2021 status, nor does it affect his relationship with Bridich.

“He’s willing to devote a lot of time and energy and thought to all of the things that he does. And so when you have somebody like that who is a professional athlete who is in the thick of it every day and trying to do the very best that he can to hold up his end of the bargain as an athlete, a teammate, a performer and then he’s always willing to think about other people on the team, in the organization and outside the organization, it’s easy to gravitate to people like that.”

Desmond complained about a lack of diversity in baseball and criticized the clubhouse atmosphere, saying it includes racism, sexism and homophobia. Bridich said Desmond didn’t complain specifically about the Rockies’ clubhouse, but Bridich did acknowledge the organization could be more diverse.

In his Instagram post, Desmond said he has been sharing more of his thoughts and experiences as a biracial man since Floyd’s death on May 25. Floyd, a Black man in handcuffs, died after a white police officer held his knee on Floyd’s neck for nearly eight minutes.

Desmond said his mind started racing during a recent visit to the Sarasota baseball fields that he played on as a kid. He wrote how they looked run down and neglected, and how important youth baseball was for him growing up.

Desmond said he wants to help Sarasota Youth Baseball get back on track.

It's a big loss for Colorado, who placed Desmond on the restricted list Tuesday and agreed to a minor league deal with Matt Kemp. The veteran slugger owns a .327 batting average with 21 home runs and 77 RBIs over 86 career games at Denver’s downtown ballpark.

“Yeah, we’re well aware of the damage that he’s done against us,” Bridich said.

Kemp, who is expected in Denver by Thursday, will have to earn his way onto the roster, and he’ll benefit from the National League using the designated hitter when pro baseball attempts to start the coronavirus-delayed season in late July.

“The DH is an obvious benefit in terms of his potential place on our major league roster,” Bridich said. “That was going to be the case whether Ian opted in or opted out, and so again, it’s a right-handed power bat. He’s got a sense of the strike zone, we’ve seen it for how many years? And he’s very motivated to get back on the field and continue his career and play well. Whether that’s in the outfield or only at DH, we have to let some weeks pass before we can make any decisions like that.”