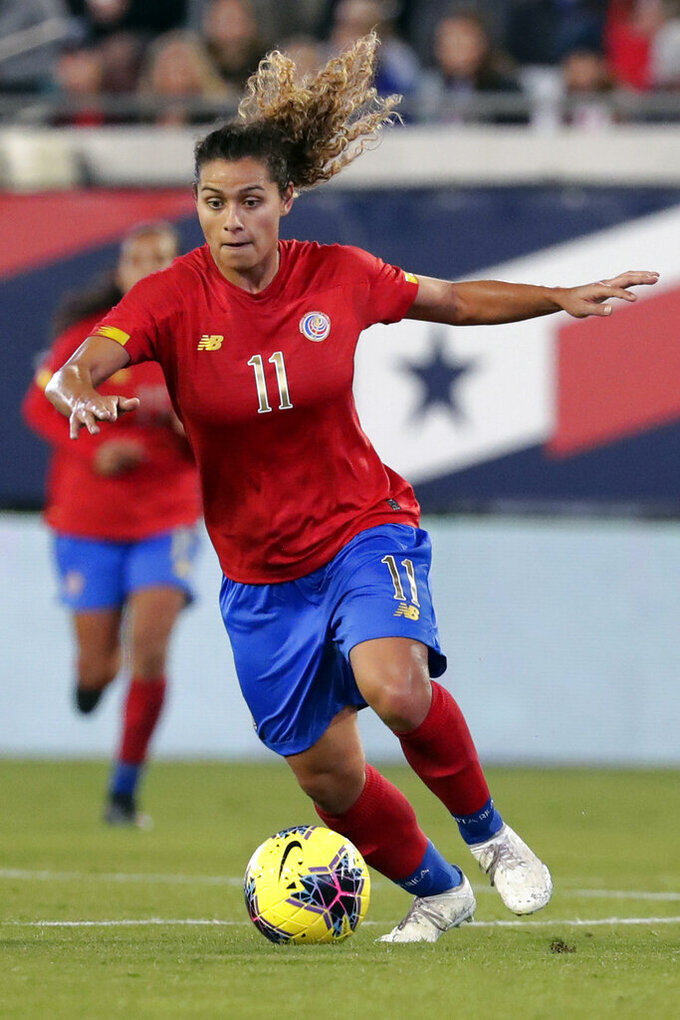 FILE - In this Nov. 10, 2019, file photo, Costa Rica midfielder Raquel Rodriguez (11) moves the ball during the second half of an international friendly soccer match against the United States, in Jacksonville, Fla. Raquel Rodriguez, better known as Rocky to her fans, was in route to join her new National Women’s Soccer League team when sports were shut down by the coronavirus. It certainly wasn’t an ideal start for the Costa Rican striker with the Portland Thorns. (AP Photo/John Raoux, File)

PORTLAND, Ore. (AP) — Raquel Rodriguez was on her way to join her new National Women’s Soccer League team when sports were suddenly shut down by the coronavirus.

It certainly wasn’t an ideal start for the Costa Rican striker with the Portland Thorns. Rodriguez nonetheless bonded — albeit remotely — with her teammates, and three months later the Thorns are set to open the NWSL Challenge Cup with a game against the North Carolina Courage on Saturday.

The NWSL is the first professional team sports league in the United States to return to the field amid the pandemic. Teams arrived Wednesday in Utah, where they'll be sequestered for the duration of the World Cup-style tournament. The final is set for July 26.

Known as Rocky, Rodriguez is one of the players to watch in the tournament.

“The NWSL is already very competitive, let alone in a tournament where every game counts and every point counts,” she said. "It’s going to be a lot. So excited for sure and also aware of the mental challenge that it’s going to be."

Rodriguez's dad played professionally and for the Costa Rican national team, and she was hooked on the sport at an early age. Turns out she was also talented: in elementary school she played for a high school team. A clear prodigy, she was just 11 when she was brought in to train with the national team.

Rodriguez ended up at Penn State. She won the MAC Hermann Trophy during her senior year as the nation's best player after scoring the winning goal for the Nittany Lions in the College Cup championship game against Duke.

The summer before that, she had scored Costa Rica's first-ever World Cup goal when Las Ticas played in Canada.

She was the second overall pick in the 2016 NWSL draft, going to Sky Blue, and went on to be named the league's Rookie of the Year.

She was traded to the Thorns earlier this year. Portland, which won league championships in 2013 and 2017, finished third last season after falling to the Chicago Red Stars in the semifinals.

“She brings all-around tenacity, all-around quality and intelligence,” Thorns coach Mark Parsons said about Rodriguez. “She's a player that loves to be on the ball, loves to be in spaces where she can create, score goals and also defend, disrupt, and break up play.”

The Challenge Cup has already faced, well, challenges. The Orlando Pride had to withdraw from the tournament earlier this week after six players and four staff members tested positive for COVID-19.

That whittled the field down to eight teams. Portland plays the defending champion Courage on national television in the opener, while the Chicago Red Stars play the Washington Spirit in the late match.

Nine players from the U.S. national team that won the World Cup in France last year are playing in the tournament. Megan Rapinoe, Tobin Heath (a Thorns teammate) and Christen Press opted out, while Carli Lloyd and Mallory Pugh are injured, and Orlando's Alex Morgan gave birth to a daughter last month. Ali Krieger, Ashlyn Harris and Emily Sonnett from the Pride will miss out after the team's withdrawal.

Players were allowed to opt out because of safety concerns without losing salaries or insurance.

Rodriguez acknowledged the risks, but at the same time she hopes the tournament brings new fans to the women's game.

“The NWSL has been doing a great job of just communicating how things are gonna be in this bubble, once we get there. We’re just navigating through the challenges, everything has a challenge," Rodriguez said. "Of course, the league is doing the best they can to make this a successful one. So hopefully it brings a little bit of enjoyment in this crazy year, not only for the players, but for the fans. And hopefully we can pick up more fans throughout the country.”