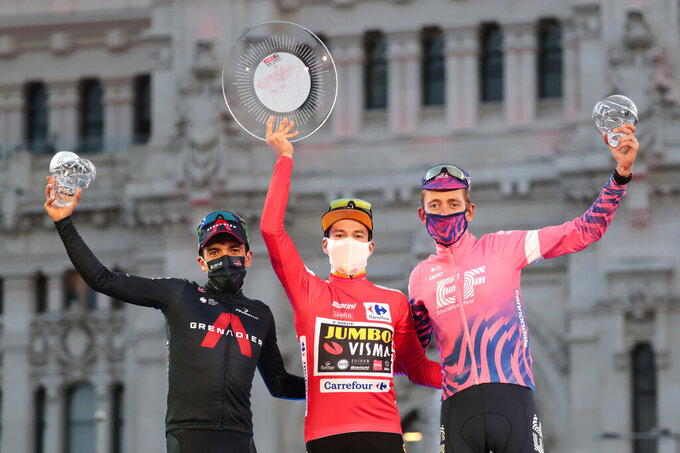 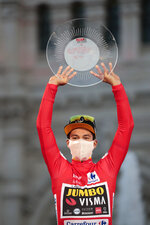 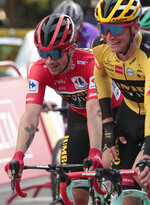 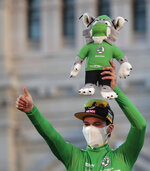 MADRID (AP) — It was a vastly different finish for Primoz Roglic at the Spanish Vuelta compared to two months ago at the Tour de France.

This time, Roglic was celebrating a Grand Tour victory instead of dwelling on a late collapse that cost him the victory.

Roglic clinched his second consecutive Vuelta victory with an uneventful final ride into Madrid in Sunday's largely ceremonial stage, solidifying his status as a top rider.

“We were just enjoying," he said. “It’s beautiful to finish the season like this. It was a special year."

The 31-year-old Slovenian from team Jumbo-Visma virtually sealed the victory in Stage 17 on Saturday after escaping another collapse in the last competitive stage, when his overall lead over Richard Carapaz was cut from 45 to 24 seconds.

It was the second Grand Tour win for Roglic, who had been in contention at the Tour de France until the last competitive day. He won four stages at the Vuelta this year, including the first. Last year he had one stage victory.

Roglic has become the first rider to win the Vuelta’s overall standings and the points classification two years in a row.

“It’s really beautiful to win the red jersey and the green jersey to finish this year,” he said.

Carapaz, the 2019 Giro d'Italia winner, became the first Ecuadorean rider to finish on the podium at the Vuelta.

Pascal Ackermann defeated Sam Bennett in a photo finish at the deciding sprint of the final stage, which lacked the huge crowds of previous editions in the Spanish capital because of the coronavirus pandemic.

“I wasn’t sure, I was asking Sam who won," Ackermann said. “I was really unsure and we had to wait after the finish and we got the message in the radio.”

Veteran Alejandro Valverde finished 10th for his 20th top 10 in a Grand Tour event at age 40. Two-time champion Chris Froome was out of contention from the start after struggling in the early stages. It was his final race before moving from team Ineos to Israel Start-Up Nation next season.

“Obviously it's been an emotional day,” said the 35-year-old British rider, who ended 98th in the overall standings. “My last with the team after 11 years.”

The Vuelta finished without major disruptions despite a surge of coronavirus cases in Spain. Tight health restrictions were in place for the race that was originally scheduled for late August and early September but was postponed because of the pandemic.

This Vuelta had only 18 stages instead of the usual 21. The sixth stage had to be altered to avoid going into French territory, and organizers had already canceled plans to hold the first three stages in the Netherlands and to have two stages enter neighboring Portugal.

A facial-recognition phone app replaced the traditional signature of riders at the start of each stage to reduce contact with pens and surfaces, and fans were asked not to gather at finish lines. Riders, team members and race staff were constantly tested for COVID-19.