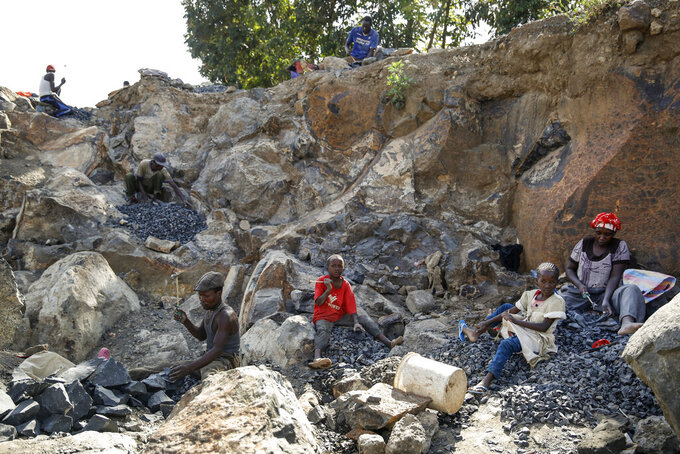 Kevin Mutinda, 7, center, his sister Irene Wanzila, 10, 2nd right, and their mother Florence Mumbua, right, work to break rocks with a hammer, after Mumbua say she was left without a choice after she lost her cleaning job at a private school when coronavirus pandemic restrictions were imposed, at Kayole quarry in Nairobi, Kenya Tuesday, Sept. 29, 2020. The United Nations says the COVID-19 pandemic risks significantly reducing gains made in the fight against child labor, putting millions of children at risk of being forced into exploitative and hazardous jobs, and school closures could exacerbate the problem. (AP Photo/Brian Inganga)

NAIROBI, Kenya (AP) — The teenage girls cannot remember how many men they have had to sleep with in the seven months since COVID-19 closed their schools, or how many of those men used protection.

Painfully, they recall times when they were sexually assaulted and then beaten up when they asked to be paid -- as little as $1 -- to help feed their families as jobs evaporated during the pandemic.

From their rented room in Kenya’s capital, the girls say the risk of getting infected with the coronavirus or HIV does not weigh heavily on them in a time when survival is paramount.

“If you get $5 in these streets, that is gold,” says a 16-year-old, seated on the small bed she shares with the 17-year-old and 18-year-old she calls her “best friends forever.” They split the $20 rent in a building where every room is home to fellow sex workers.

According to UNICEF, the U.N. children’s agency, recent gains in the fight against child labor are at risk because of the pandemic. The world could see the first rise in the number of working children since 2000. The U.N. warns that millions of children may be forced into exploitative and hazardous jobs, and school closures exacerbate the problem.

Mary Mugure, a former sex worker, launched Night Nurse to rescue girls who followed her path. She says since schools in Kenya closed in March, up to 1,000 schoolgirls have become sex workers in the three Nairobi neighborhoods she monitors. Most are trying to help their parents with household bills.

Each of the three girls sharing a room was raised with several siblings by a single mother. They saw their mothers’ sources of income vanish when Kenya’s government clamped down to prevent the spread of the virus.

Two of their mothers had been washing clothes for people who lived near their low-income neighborhood of Dandora. But as soon as the first local virus case was confirmed, nobody wanted them in their homes, the girls say. The third mother was selling potatoes by the roadside, a business that collapsed because of a new curfew.

As eldest children, the girls say they took it upon themselves to help their mothers feed their families.

The girls had been spending their free time as part of a popular dance group, and they were paid for gigs. But when public gatherings were restricted, that income ended.

Elsewhere in Nairobi, single mother Florence Mumbua and her three children -- ages 7, 10 and 12 -- crack rocks at a quarry in the sweltering heat.

The work is backbreaking and hazardous, but the 34-year-old Mumbua says she was left without a choice after she lost her cleaning job at a private school when pandemic restrictions were imposed.

“I have to work with (the children) because they need to eat and yet I make little money,” she says. “When we work as a team, we can make enough money for our lunch, breakfast and dinner.”

“When he started working, I realized that it is helpful as he does not sit idle at home or play video games that are not beneficial to him,” she says. “But when he goes to work, he earns money that helps us. He also buys clothes such as shirts and shoes for himself.”

Phillista Onyango, who leads the Kenya-based African Network for the Protection and Prevention of Child Abuse and Neglect, says with schools closed, parents in low-income neighborhoods prefer to have children work instead of staying home, where they can slide into drug abuse and crime.

Onyango says enforcement of child labor laws has been lax. Kenya’s employment act defines a child as someone under 18. It allows employment of children 13 to 16 for part-time and “light work duties.” Those who are 16 to 18 can work in industry and construction, though not at night.

According to a U.S. Department of Labor report last year, Kenya has made “moderate advancement” in eliminating the worst forms of child labor, such as sexual exploitation, but there is still work to be done.

Kenya had 85 labor inspectors, probably too few to police a workforce of more than 19 million workers, the report says.

Kenya has started easing restrictions on movement and public gatherings due to the country’s relatively low number of confirmed COVID-19 cases, and plans a phased reopening of schools this month. But Onyango says many children who started working when schools closed will not return.

Sub-Saharan Africa already had the world’s highest rates of children out of school. Nearly a fifth of children between 6 and 11 -- and more than a third of youth between 12 and 14 -- do not attend, according to UNICEF.

The 16-year-old sex worker and her two friends say they hope they won’t be doing this for the rest of their lives, but they think their chances of returning to class are remote.

“Where we come from, we were some sort of role models,” the 16-year-old says. “Our neighborhood, if you get to 16 without getting pregnant and still in school, then you have made it. Having avoided pregnancies, we were this close to graduating from high school and making history.”