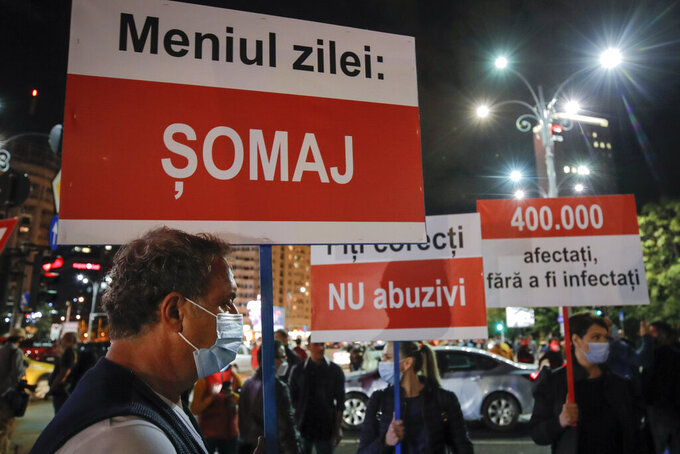 A protester holds a banner that reads "Today's Menu: Unemployment" as hospitality workers protest against the government's decision for the closure of restaurants, cinemas, theatres and hospitality venues in the capital, for a second time, in Bucharest, Romania, Wednesday, Oct. 7, 2020. Hundreds of Romanian hospitality workers protested Wednesday evening in the capital, Bucharest, against what they describe as the national government’s failure to protect their industry from the economic fallout of the coronavirus epidemic in the country. (AP Photo/Vadim Ghirda)

BUCHAREST, Romania (AP) — Hundreds of Romanian hospitality workers protested Wednesday evening in the capital, Bucharest, accusing the government of failing to protect their industry from the pandemic's economic fallout, even as a new lockdown kicked in.

The peaceful protest outside the Romanian government building came as the country reported a record daily 2,985 coronavirus infections nationwide.

It also coincided with Bucharest authorities’ decision earlier in the day to once again shut down all the capital's indoor restaurants, theaters, movie cinemas, gambling and dance venues. These establishments reopened early last month after being forced to stay shut for nearly half a year.

Protesters carried signs and banners reading: “Today’s menu: unemployment” and “400,000 affected while not infected” -- in reference to the pre-pandemic number of Romania's hospitality sector jobs.

Cezar Andrei, who has been running a fish restaurant in Bucharest for the past 20 years, said he won’t be able to stay afloat for much longer if he is not allowed to work.

“We are aware of the risks posed by the virus, but this is not the way to solve the problem,” Andrei said.

“We can probably last for another month or so, but not much longer,” he added, arguing that the recent surge in COVID-19 cases in Romania has not been traced back to the hospitality sector.

The national association of restaurant owners and hoteliers, which backed the protest, said more than 40% of jobs in the hospitality sector have been lost due to lockdown measures since the pandemic hit the country in February, while turnover fell 70%. Hospitality accounted for about a tenth of all private sector jobs in Romania last year, and contributed 5% of GDP.

Moaghin Marius Ciprian, the owner of the popular Grivita Pub n Grill in downtown Bucharest, stressed that restaurants were not to blame for the increase in infections.

“We were closed for six months, the restaurants didn’t work and yet the number of cases still rose,” Cipriani said. “I am not an expert, but I am not stupid either … we are not responsible,” for the accelerated spread of the virus.

On Wednesday, the total number of confirmed infections in Romania — a country of some 19 million -- stood at over 142,000, including 5,200 deaths. Almost two-thirds of the confirmed cases were reported since the end of July.