Ronaldo in doubt for Messi's visit to Juventus 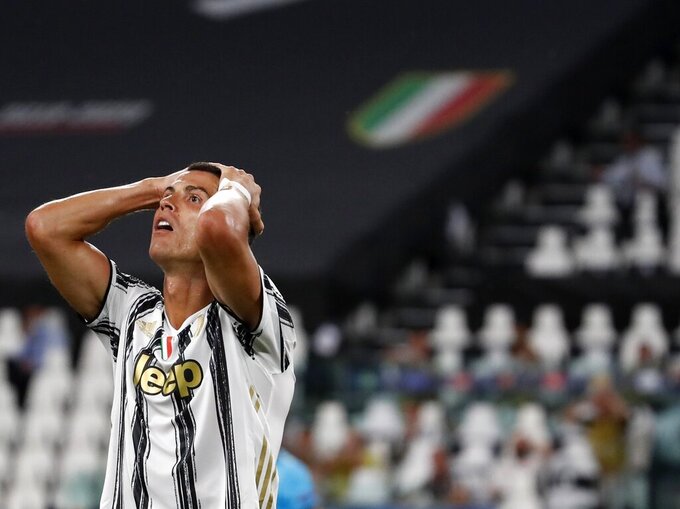 FILE - In this Friday, Aug. 7, 2020 file photo Juventus' Cristiano Ronaldo reacts during the Champions League round of 16 second leg, soccer match between Juventus and Lyon at the Allianz stadium in Turin, Italy. The Portuguese soccer federation says Cristiano Ronaldo has tested positive for the coronavirus. The federation says Ronaldo is doing well and has no symptoms. He has been dropped from the country's Nations League match against Sweden on Wednesday. (AP Photo/Antonio Calanni, File)

Some talking points ahead of the second round of games in the Champions League:

NO RONALDO VS. MESSI?

The highly anticipated matchup of Cristiano Ronaldo against Lionel Messi likely won’t happen because Ronaldo has the coronavirus. Juventus has not reported many details of Ronaldo’s status but the forward has not played since appearing for Portugal earlier this month and isn’t expected to be named to the Bianconeri’s squad for Wednesday’s visit by Barcelona in Group G. Ronaldo tested positive while on international duty and has been quarantined at his home in Turin. Alvaro Morata replaced Ronaldo against Dynamo Kyiv last week and scored twice in a 2-0 win.

Could this be the week Chelsea manager Frank Lampard finally unleashes his very own “Fab Four”? In the wake of the club's $300 million spending spree, there was lots of excitement at the start of the season about the prospect of Chelsea deploying a four-man front line comprising Christian Pulisic, Kai Havertz and Hakim Ziyech behind lone striker Timo Werner. A mixture of injuries and rotation meant this has yet to happen, but the option is there for Lampard in Chelsea's match at Krasnodar on Wednesday. Both Chelsea and Krasnodar are seeking a first win after drawing their opening Group E matches against Sevilla and Rennes, respectively. Manchester City would simply like to get a striker on the field against Marseille in Group C on Tuesday, but it is unlikely. Sergio Aguero, just back from a long-term knee injury, sustained a muscle problem against West Ham in the Premier League on Saturday and joins fellow striker Gabriel Jesus on the sidelines again.

For all his evident talent, Neymar is having a worrying lean spell in Europe’s elite competition. The star forward has not scored in his last four Champions League games, having squandered chances galore during the Final Eight in Lisbon and in last week’s 2-1 home defeat to Manchester United in Group H. That loss has PSG under some early pressure, and Neymar's performance was widely criticized. It was back to the Neymar of old, as he constantly gave the ball away trying to dribble past too many players or rolled on the ground claiming fouls. The match at Turkish side İstanbul Basaksehir on Wednesday is likely to be a physical encounter and Neymar, who has already been sent off this season, will have to keep his cool. PSG coach Thomas Tuchel must also juggle with injuries, with winger Julian Draxler the latest to be sidelined.

Zinedine Zidane wants Real Madrid to play with the same intensity the team showed in its win over Barcelona in the “clasico” on Saturday. Madrid visits Borussia Mönchengladbach in Group B on Tuesday and is seeking to bounce back from a surprise opening home loss to Shakhtar Donetsk. Eden Hazard was added to the Madrid squad and could make his season debut after nursing a muscle injury. Atlético Madrid and Luis Suárez are also looking to rebound. Diego Simeone's side was thrashed 4-0 by defending champion Bayern Munich and next hosts Salzburg in Group A on Tuesday.

Bayern’s biggest challenges seem to be how to maintain its outstanding form and meet its own burgeoning expectations. Bayern started its Champions League defense with a 4-0 rout of Atlético Madrid, extending its winning run in the competition to 13 games. Hansi Flick’s team has scored at least four goals in its last three games in the Bundesliga. Atlético at least managed to stop Robert Lewandowski from scoring, but he answered Saturday with a hat trick against Eintracht Frankfurt to take his Bundesliga tally to 10 goals in five games. Even if he doesn’t score, others can fill in, such as Leroy Sané who marked his return from injury with an outstanding goal against Frankfurt. Forward Serge Gnabry was released from quarantine on Sunday after testing negative again. Lokomotiv Moscow hosts Bayern in Group A on Tuesday. The teams last met in the UEFA Cup in 1985, when Bayern won 5-0.