Ronaldo scores in round of friendlies affected by virus 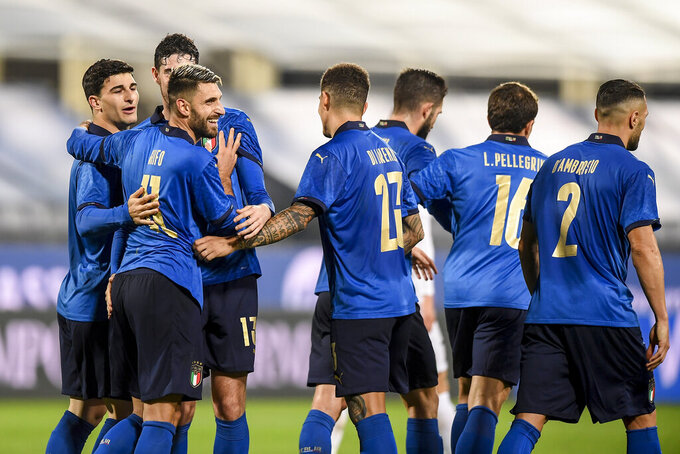 MADRID (AP) — Cristiano Ronaldo moved closer to becoming the all-time top scorer for a national team on Wednesday in a round of friendlies in which several matches were affected by the coronavirus.

Ronaldo netted once in Portugal’s 7-0 rout of Andorra to take his tally to 102 international goals, seven shy of the 109 scored by former Iran striker Ali Daei, the only other male soccer player to surpass the 100-goal milestone for a national team.

Coming off a minor knee injury, Ronaldo entered the match after halftime and scored the sixth goal with a close-range header in the 85th minute after having squandered a few good opportunities.

“Everyone was a little anxious to score,” Portugal coach Fernando Santos said.

Ronaldo was back after recovering from COVID-19 but several other players couldn't play for their teams because of the virus. The matches involving Italy, Belgium, Germany and the Czech Republic were among those affected by the pandemic.

Norway’s home match against Israel was canceled after a recommendation by local health authorities following a positive test result by an Israeli player.

Many nations rested regular starters ahead of the decisive rounds of the Nations League beginning this weekend.

The biggest surprise was France's 2-0 loss to Finland.

Ronaldo came on for Pedro Neto, the 20-year-old Wolverhampton forward who made his national team debut and opened the scoring for Portugal in the eighth minute. Paulinho, who was also making his Portugal debut, added to the lead in the 29th and Renato Sanches scored in the 56th.

Paulinho scored again in the 61st, and an own-goal by Andorra’s Emili Garcia in the 76th made it 5-0. João Félix closed the scoring in the final minutes.

Italy was without coach Roberto Mancini and several players because of the coronavirus. Players from six clubs — Fiorentina, Genoa, Inter Milan, Lazio, Roma and Sassuolo — were self-isolating, forcing Mancini to name an enlarged squad of 41 players.

Mancini himself was self-isolating after testing positive for the virus on Friday. He was replaced by assistant coach Alberigo Evani.

Lucas Waldschmidt’s early goal gave an inexperienced Germany squad a 1-0 win over the Czech Republic, with Germany goalkeeper Kevin Trapp making a late save to deny Matěj Vydra an equalizer for the visitors.

The Czech Republic was without two players who tested positive for COVID-19. The game was played without fans to minimize the risk of infections.

Manchester City midfielder İlkay Gündoğan recovered from his COVID-19 infection to captain Germany. Regulars such as the Bayern Munich players and Real Madrid midfielder Toni Kroos were omitted for the friendly and are only joining up with the squad for the upcoming Nations League games.

First-half goals from winger Marcus Forss and striker Onni Valakari gave the Finns the unexpected win after France carved open the visiting defense early on but failed to capitalize on its chances.

Donny van de Beek scored a 47th-minute equalizer as the Netherlands drew 1-1 at home against Spain at the Johan Cruyff Arena.

Spain, missing striker Rodrigo because of the coronavirus, had taken the lead when Sergio Canales scored his first international goal in the 19th.

“We had a plan to have our players fresh in the official matches, but I'm satisfied with the team's performance,” Spain coach Luis Enrique said.

It was a fourth match in charge without a win for Netherlands coach Frank de Boer, whose record is now a loss and three draws.

“Of course you want a victory as soon as possible,” De Boer told Dutch broadcaster NOS. “Let’s do that against Bosnia (in the Nations League)."

The match was a repeat of the 2010 World Cup final in Johannesburg that Spain won 1-0.

Striker Michy Batshuayi made up for his team’s lackluster display by scoring twice as Belgium came from behind to beat Switzerland 2-1.

Eden Hazard was absent as he was quarantined in Spain following a COVID-19 positive test.