In Russia and Ukraine, no social distance on crowded beaches 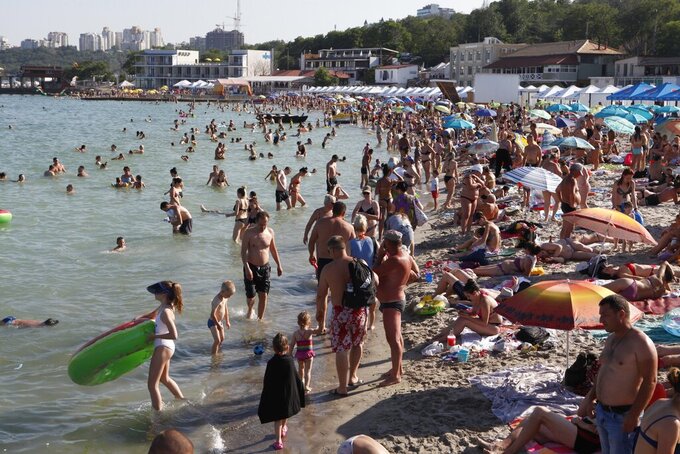 People enjoy the beach in the Black Sea in Odessa, Ukraine, Saturday, July 4, 2020. Tens of thousands of vacation-goers in Russia and Ukraine have descended on Black Sea beaches, paying little attention to safety measures despite levels of contagion still remaining high in both countries. (AP Photo/Sergei Poliakov)

SOCHI, Russia (AP) — Tens of thousands of vacation-goers in Russia and Ukraine have descended on Black Sea beaches, paying little heed to public health measures despite the numbers of reported coronavirus cases remaining high in both countries.

Desperate for a break from the confinement of months-long lockdowns, few wear masks or try to maintain social distance as they bask in the sun on overcrowded beaches in the Russian city of Sochi and in the Ukrainian seaport of Odesa.

While popular vacation destinations in Europe are still closed to visitors from Russia and Ukraine as European nations move carefully to lift restrictions on foreign visitors, Black Sea resorts in Russia and Ukraine are filled to capacity from domestic tourism.

“We usually go abroad: the Emirates, Tunisia, Turkey, and we did plan to go again this year," Tatyana Kofler, a Russian who is spending her summer leave in Sochi, said. "But then our plans changed.”

The owners of beaches that require a fee place lounge chairs at required intervals, but on the city's public beaches few visitors appeared concerned with trying to avoid COVID-19 by maintaining a safe distance.

Hotel owners are happy about the bonanza, and prices for rooms are soaring.

“Our hotel is booked to the max, and the projections are very optimistic, because preliminary bookings indicate the load will remain very good up to November,” said David Vardanyan, a Sochi hotel owner.

In the past, many Russians who live in the eastern part of a country that spans 11 time zones took vacations in Thailand, China or Vietnam to save money on air travel. Those destinations remain off-limits to foreigners, too, for now, helping swell the numbers of people streaming westward to Sochi and the Crimean Peninsula that Russia annexed from Ukraine in 2014.

Now, Russian sun-lovers are left with the narrow pebble beaches of Sochi or Crimea as their only beach vacation options.

A 19-kilometer (12-mile) bridge to Crimea that opened in 2018 facilitated travel to the region, but it has suffered from freshwater shortages and rationing resulting from Ukraine cutting supplies. Russia's 2014 annexation of Crimea, a move that Ukraine and most of the world regards as illegal, problems that overshadow the attractiveness of the Black Sea peninsula's beautiful coast and scenic mountains.

Both in Sochi and Crimea, popular hotels that offer European standards of comfort already are fully booked for the summer.

“Tourists who traveled to Cyprus, Turkey, Greece or Spain during the past years have grown accustomed to a certain level of comfort,” Alexan Mkrtchian, head of the Pink Elephant tourist agency, said, according to the Interfax news agency. “Only 20 to 30 hotels meet those criteria.”

Mkrtchian noted that a jump in demand provoked a hike in hotel prices that jumped by 50% in Sochi and up to 100% in Crimea, costing a couple of hundreds dollars or more for lodging at an average 4-star hotel.

The flow of visitors to seaside resorts comes at a time when both Russia and Ukraine are continuing to report high daily numbers of new cases.

Russia, which has the world's fourth-largest coronavirus caseload of more than 687,000 following the United States, Brazil and India, currently registers daily infection numbers topping 6,600. While Moscow has ended a lockdown as contagion dropped, many other regions of the vast country have kept restrictions in place.

In Ukraine's Odesa, traffic jams at the entrance to the city spread for kilometers (miles), and crowds besiege the city's night clubs after sunset. Vacationing visitors are flouting rules to wear masks in public and paying little attention to maintaining social distance. Officials are worried about a possible spike in coronavirus infections.

“The Ukrainians are afraid of the coronavirus less than anyone in the world," said Fazil Askerov, chairman of the Tourism Development Association in the Odesa region. “Our tourists are braver.”