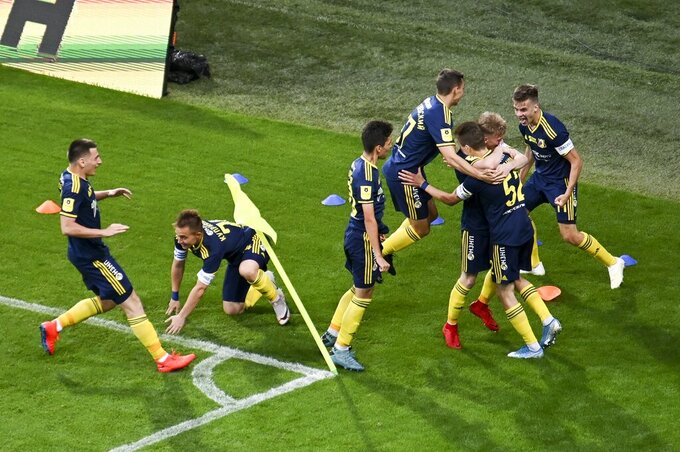 Rostov's players celebrate after scoring their side's goal during a Russia Soccer Premier League soccer match against FC Sochi as the league was resumed after a three-month hiatus because of the coronavirus pandemic in Sochi, Russia, Friday, June 19, 2020. Rostov fielded a team of teenagers because its entire first-team squad is in isolation following a suspected outbreak of coronavirus. The match is being played with a minimum spectators to curb the spread of COVID-19. (AP Photo)

SOCHI, Russia (AP) — A team of teenagers took the field for a club hit by the coronavirus pandemic and lost 10-1 as soccer in Russia restarted Friday.

FC Rostov was forced to send a squad with an average age of barely 17 to play against Sochi, two days after its entire first team was put into isolation over a suspected virus outbreak among six players.

Sochi refused to postpone the game, leaving Rostov a choice between fielding academy graduates or accepting defeat by default.

A fairytale result was briefly on the cards as Roman Romanov gave Rostov the lead after 52 seconds with a low shot from the edge of the penalty area. Sochi soon hit back and finished with 10 goals, the most in league history, mostly scored by players with Russian national-team experience.

Rostov's 17-year-old goalkeeper Denis Popov won widespread praise and was named man of the match. Despite conceding a record number of goals, he stopped a penalty and also set a new league record for most saves in a game with 15.

It was “sad that we lost by such a big score, but we got a lot of experience,” Popov said on his club's website.

Hours later, Rostov's fans welcomed the team bus home with flags and flares at the roadside.

“Well done to our kids, they're real beauties. The rest isn't important. These lads are champions of the future,” club president Artashes Arutyunyants said.

Still, the defeat is a blow to Rostov's hopes of reaching the Champions League next season. It is fourth in the table, with the top three qualifying.

The Russian Premier League resumed Friday after more than three months, with a limited number of fans in stadiums. Supporters were allowed in up to 10 percent of capacity and asked to sit apart.