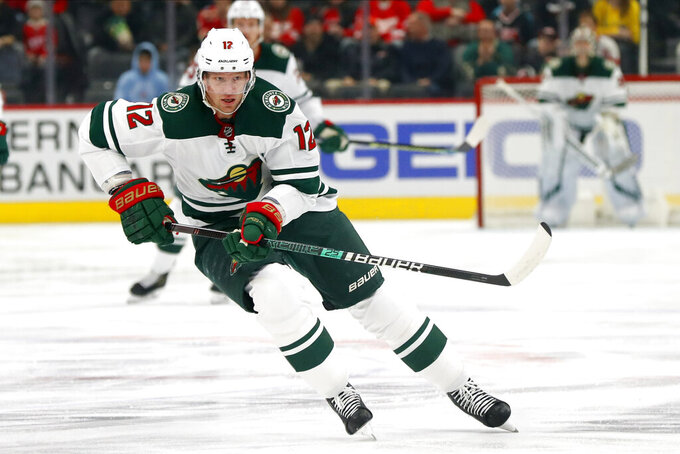 FILE - In this Feb. 27, 2020, file photo, Minnesota Wild center Eric Staal (12) skates against the Detroit Red Wings in the first period of an NHL hockey game in Detroit. Buffalo Sabres coach Ralph Krueger prefers viewing the start of the 2021 shortened season as a continuation of the last one. If that's the case, the new-look Sabres, with the addition of Taylor Hall and Eric Staal, have plenty of unfinished business in attempting to snap a nine-year playoff drought, the NHL's longest active streak. (AP Photo/Paul Sancya, File)

BUFFALO, N.Y. (AP) — Ralph Krueger doesn’t consider the Sabres’ home opener against the Washington Capitals on Jan. 14 as the start of a new season. Buffalo’s second-year coach is approaching it more as a continuation of the past one.

However one might view it, Buffalo has plenty of catching up to do.

The Sabres have been off since a 3-2 shootout win over the Capitals on March 9, before the NHL paused its regular season because of the coronavirus pandemic. And once the regular season was canceled in May, Buffalo (30-31-8) finished less than one percentage point behind Montreal (31-31-9) from qualifying for the expanded playoffs.

The reminders of how close Buffalo came to ending a nine-year playoff drought — the NHL’s longest active streak, and one shy of matching the league record — are evident in how the team stumbled in losing six straight before beating the Capitals.

Rather than linger on the negatives, Krueger is focused on preaching the positives Buffalo showed in being in a playoff position as late as February before the wheels came off.

“Yes, frustrated and angry for the final result,” he said. “But excited and confident about those moments of confirmation. And we will be driving that much more into their minds than the failures of last year.”

It won’t be easy.

Buffalo is preparing for a shortened 56-game sprint of a season in an ultra-competitive realigned East Division. Except for Buffalo and New Jersey, six of the eight teams made the playoffs last year.

If there is reason for hope in Buffalo, following a tumultuous offseason in which general manager Jason Botterill was abruptly fired and replaced by former player Kevyn Adams, it's in how the Sabres roster improved — on paper at least.

Buffalo landed the most high-profile forward in free agency by signing Taylor Hall to a one-year, $8 million contract and acquired Eric Staal in a trade with Minnesota.

Hall is expected to play on the top centered by captain Jack Eichel. Entering his 17th NHL season, Staal is not only expected to fill a much-needed hole in centering the second line, but brings valuable leadership to a team previously knocked for being fragile.

“I think I was visiting my parents in the backyard and my dad came out and told me that Eric Staal is on our team. I thought he was joking with me at first,” said forward Jeff Skinner, who played with Staal in Carolina. “Obviously, he can still play. And the intangibles that he brings off the ice are something we can definitely draw off him.”

Hall, the NHL’s 2018 MVP and a six-time 20-goal-scorer, upgrades a team that over-relied on its top line for offense. Eichel, who is coming off a career year with 36 goals and 78 points in 68 games, and wingers Sam Reinhart and rookie Victor Olofsson accounted for 78 of the team’s 193 goals last season.

Skinner should benefit from the upgrades. He struggled playing a second-line role by finishing with 14 goals and a career-low 23 points in 59 games. It followed a year in which Skinner scored a career-best 40 goals, while playing alongside Eichel, and led to Buffalo signing the player to an eight-year, $72 million contract.

Carter Hutton and Linus Ullmark return as Buffalo’s goaltending tandem after an inconsistent season. Ullmark finished 16-14-3 in eventually taking over the starting duties before missing 18 games with a right leg injury. Hutton finished 12-14-4 and endured an 0-8-4 midseason skid while dealing with an eyesight issue that required treatment to correct.

Defenseman Rasmus Dahlin, the No. 1 pick in the 2018 draft, has bulked up and is listed at 207 pounds — nearly 15 heavier than last year. The fast-skating, play-making defenseman felt it was important to add weight to provide more of a physical presence in his own end, and an anticipated increase in playing time.

Dahlin initially struggled adjusting to Krueger’s system before finishing second among team defenseman, behind Rasmus Ristolainen, in averaging just over 19 minutes of ice time per game.

EAST IS A BEAST

With division-play only this year, the Sabres have a spotty history against their rivals. Buffalo went 6-9-1 against their East foes last season and is a combined 34-57-13 over the past five years. In that span, the Sabres have just five wins each against six division rivals. They are 4-8-2 against the Capitals, who visit Buffalo for back-to-back games to open the season.