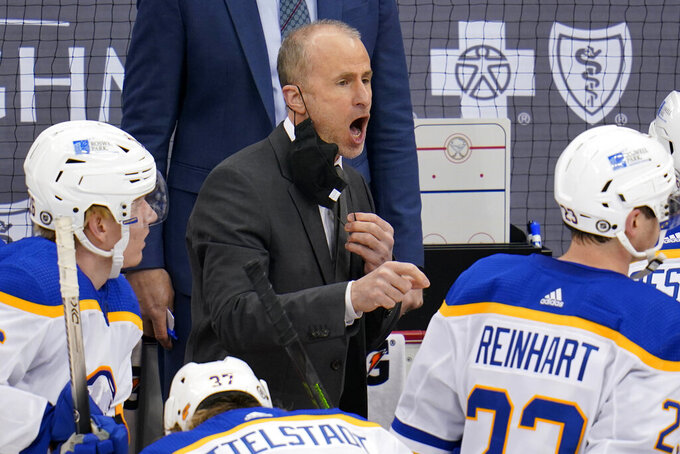 BUFFALO, N.Y. (AP) — The Sabres were so confident they had moved forward corner from their miserable past, the team’s marketing department included owner Terry Pegula’s hopeful comments in a televised feature on how Buffalo landed Taylor Hall in free agency in October.

“We sign this guy,” Pegula was overheard saying during a closed-door meeting with general manager Kevyn Adams, “we’re not only trying to make the playoffs, we’re trying to win the Cup.”

Instead, the Sabres tied the NHL record by missing the playoffs for the 10th straight season.

With a 1-0 loss at Pittsburgh on Saturday, Buffalo (15-34-7) finished last in the overall standings for the fourth time in seven years.

Hall barely lasted until April, before being traded to Boston as part of Buffalo's purge of high-priced, expiring contracts. The revolving door continued at coach, with Ralph Krueger fired in mid-March and the team in the midst of what became an 18-game winless skid, which matched the NHL's 14th longest.

In addition to a two-week COVID-19-related pause to its schedule in February, the Sabres were beset by injuries, which included captain Jack Eichel missing the final two months with a herniated disk. Buffalo started a league-high six goalies.

Management again over-estimated how close the franchise was to becoming a contender, attempting quick fixes with headline-grabbing signings.

It leaves Adams entering his second offseason having to determine a new direction for a franchise suddenly trending toward youth, and whether interim coach Don Granato did enough over the final half of the season to deserve taking over the job full-time.

In calling Granato a definite contender, Adams vowed to make a wide-ranging search to hire what will become the franchise’s sixth coach since Lindy Ruff was fired in February 2013.

The question is how much money the cost-conscious Sabres are willing to invest? No coach has lasted beyond a second season since Ruff’s departure.

It’s difficult to overlook the impact the 53-year-old Granato made in developing youngsters, while also getting more production out of an injury-depleted lineup than Krueger did in opening the season with nearly a full compliment of players.

In 28 games under Granato, the Sabres went 9-16-3 and were outscored 101-76. Buffalo also rallied to win three times when trailing after two periods under Granato after going 0-16-1 under Krueger.

Granato’s biggest influence was evident by the jumps in production from many of the young and developing prospects, who struggled under Krueger.

“I think a lot of guys, including myself, owe Donnie quite a bit,” Mittelstadt said, Saturday. “He challenged me when he took over and pushed me to become a better player.”

Defenseman Rasmus Dahlin acknowledged regaining his confidence in being free to play more of a two-way role under the new coach. And even veteran Sam Reinhart proved he could capably fill a top-line center role — something he struggled with in his first six-plus NHL seasons — in leading the team with a career-best matching 25 goals and 40 points.

Granato would like nothing more but continue what he’s started as a first-time NHL coach.

“When you improve enough, there’s a tipping point where everything becomes consistent. Having invested time in that, of course you want to stay,” Granato said. “But we all know the business. And we don't know the answer to that yet. And we’ll take it as it comes.”

The Sabres can retain Reinhart’s rights for one more season but expect the player to seek a longer-term deal after being limited to signing one- and two-year extensions the past three years. Buffalo took the calculated risk to keep goalie Linus Ullmark at the trade deadline, with the intention to re-sign him before his contact expires this summer. Defenseman Jake McCabe is a pending free agent, who has been out since blowing out his right knee in February.

Buffalo is projected to have more than $30 million of salary-cap space available, but a large chunk will be devoted to re-signing Reinhart, Mittelstadt and Dahlin, who has completed his three-year rookie deal.

Buffalo has a chance to free up a high-priced contract should it convince forwards Jeff Skinner and/or Kyle Okposo to drop their no-trade clauses in order to be exposed to the Seattle Kraken in the expansion draft in July.