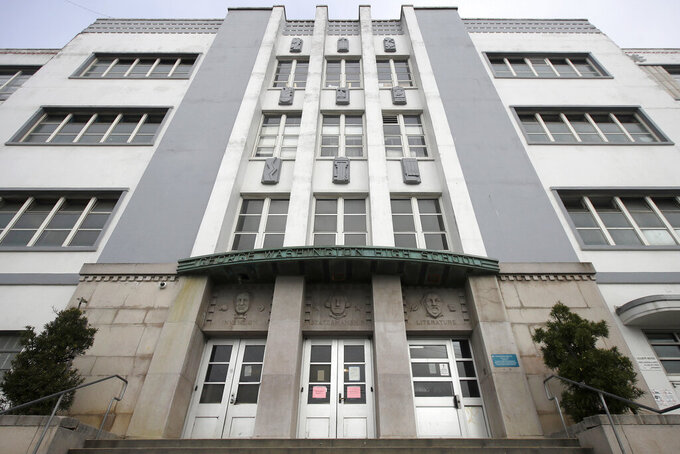 FILE - In this March 12, 2020, file photo, George Washington High School stands in San Francisco. After a full year of distance learning, San Francisco's high school seniors will get to return to classrooms for "at least one day" before graduation in a deal between teachers and the school district, a plan that drew quick criticism. The teachers union announced the "exciting news" last weekend that the Class of 2021 will be able to return to classrooms starting Friday, May 14, 2021. (AP Photo/Jeff Chiu, File)

SAN FRANCISCO (AP) — After a full year of distance learning, San Francisco’s high school seniors will get to return to classrooms for “at least one day" before graduation in a deal between teachers and the school district that drew quick criticism.

The teachers union announced the “exciting news” last weekend that the Class of 2021 will be able to return to classrooms starting Friday. But it left out the details: It calls for seniors to come back to school “for at least one day before the end of the school year,” there will be no in-person instruction and just two of the city’s 15 high schools will be reopened, the San Francisco Chronicle reported Monday.

Critics said the plan is merely a ploy to tap state funding while failing to serve students.

The announced return date for seniors is one day shy of a May 15 deadline public schools need to meet to qualify for their share of $2 billion in state reopening funds, part of legislation approved this year to encourage school districts that closed in the pandemic to bring students back.

Assemblyman Phil Ting, who authored the legislation, called the plan disappointing. He said he didn’t know if the district's plan meets the state requirements to receive funding.

The deal between the district and teachers union does not call for in-person instruction. Instead, it includes “in person supervision” in which students will have activities that might include “end of high school conversations,” or “college and career exploration,” said district officials. San Francisco public schools end the term in early June.

The school board was expected to discuss the plan in more detail at a Tuesday meeting.

San Francisco Unified School District was among the last large school systems in the country to bring students back after campuses were shuttered during the pandemic. Elementary students returned in April.

Its much -criticized reopening followed months of political back-and-forth, labor talks and a lawsuit.

District elementary schools and preschools reopened on a rolling basis, with about 22,000 of the district’s 52,000 students in classrooms. Most middle and high school students have continued with remote learning, though 2,000 upper-grade students in at-risk populations such as special day classes, foster care and homeless situations returned on April 26.

Under Ting's legislation, school districts were eligible for their full share of funds if they reopened campuses to elementary students and at least one full middle or high school grade by April 1. Districts lose 1% of funding each school day they remain closed after that date and forfeit their entire share of grant funding if they do not meet the minimum requirements by May 15.

Some parents criticized the plan as a blatant money grab that does not address students needs.

“Does this show them that they matter, or just that the money matters?” a school reopening advocacy group, Decreasing the Distance, said in a statement. “One senior told us she wants to return, but not like this. Her reaction: ‘It’s too little too late. School’s over.’”