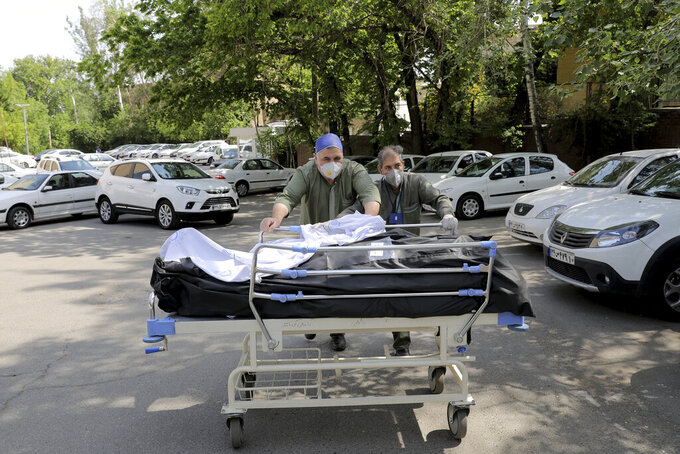 Hospital workers move two bodies of patients who died from COVID-19, at the yard of the Shohadaye Tajrish Hospital in Tehran, Iran, Sunday, April 18, 2021. After facing criticism for downplaying the virus last year, authorities have put partial lockdowns and other measures in place to try and slow the coronavirus’ spread, as Iran faces what looks like its worst wave of the coronavirus pandemic yet. (AP Photo/Ebrahim Noroozi)

TEHRAN, Iran (AP) — As Iran faces what looks like its worst wave of the coronavirus pandemic yet, Tehran commuters still pour into its subway system and buses each working day, even as images of the gasping ill are repeatedly shown on state television every night.

After facing criticism for downplaying the virus last year, Iranian authorities have put partial lockdowns and other measures back in place to try and slow the virus' spread.

But in this nation of 84 million people, which faces crushing U.S. sanctions, many struggle to earn enough to feed their families. Economic pressure, coupled with the growing uncertainty over when vaccines will be widely available in the Islamic Republic, have many simply giving up on social distancing, considering it an unaffordable luxury. That has public health officials worried the worst of the pandemic still may be yet to come.

“I cannot stop working," said Mostafa Shahni, a worried 34-year-old construction worker in Tehran. “If I do, I can’t bring home bread for my wife and two kids.”

Iran is now reporting its highest-ever new coronavirus case numbers — more than 25,000 a day. Its daily death toll has surged to around 400, still below the grim record of 486 it reached in November.

During the peak of Iran’s last surge, around 20,000 coronavirus patients were hospitalized across the country. Today, that figure has topped 40,000. The health ministry warns the number will climb to 60,000 in the coming weeks. Iran remains among the hardest-hit countries in the world and the worst-hit in the Middle East.

Across Tehran, Associated Press journalists have seen signs of the pandemic's toll.

At Tehran’s Shohadaye Tajrish Hospital, orderlies pushed the bodies of two victims of the coronavirus across a parking lot to its morgue, one wrapped in white, the other in a black body bag. All of its wards on five floors of the hospital are reserved for coronavirus patients. One empty gurney held a bouquet of roses left for a recently deceased man. A heart-shaped balloon hovered over a still respirator.

At the massive Behesht-e-Zahra cemetery, already reeling from the pandemic, workers laid cinder-block rows of new graves. Mourners in black wept at a stream of funerals. Officials plan to open a new morgue at the site to handle the wave of death, much wrought by what Iranians simply call “corona.”

Saeed Khal, the director of Tehran’s main cemetery, said workers buried 350 bodies there on Tuesday alone — at least 150 had died of coronavirus. The cemetery had never processed that many burials in a single day, not even during Iran’s war with Iraq in the 1980s that saw 1 million people killed.

It was “one of the hardest and saddest days for my colleagues in the half-century-history of the cemetery,” Khal told state TV.

So much is the influx that some burials are being delayed by a day, unusual for Iran which follows the Islamic practice of immediately burying the dead.

Outside the gates of Tehran's Imam Khomeini Hospital complex, where the capital's poor can receive free treatment at its 1,300 beds, scores crowded around one recent day as guards turned away routine cases and allowed in only test-confirmed coronavirus cases.

“They say the wards are full of corona patients,” said Manijeh Taheri, who sought a regular thyroid treatment for her mother at the hospital. “I have no idea where to take her when such a huge complex has no place for my mother.”

Field hospitals are being prepared in Tehran and other major cities. State TV has shown images at hospitals outside the capital with patients being treated in hallways.

“We are not going out of the red zone any time soon,” Deputy Health Minister Alireza Raisi told state media.

President Hassan Rouhani blames the current surge on the fast-spreading variant of the virus first found in Britain, which the government says arrived from neighboring Iraq. Travel between the countries has been restricted since March, though people and commerce continue to cross each day. Overall, Iran has seen 2.2 million reported cases and 67,000 deaths in total.

“Sanctions, challenges and wrong decisions will continue. We do not have sufficient vaccines so protect yourself and your relatives through personal health measures,” he wrote on Twitter.

As of now, Iran has administered over 500,000 vaccine doses, according to the WHO. Supplies, however, remain limited. Iran’s Supreme Leader Ayatollah Ali Khamenei has banned U.S. and British-made coronavirus vaccines, saying their import is “forbidden” because he does not trust those nations. Khamenei has approved the import of vaccines from “safe” countries, such as China and Russia, and has backed national efforts to produce a homegrown vaccine with help from Cuba.

But officials keep changing when they say the wider public will be vaccinated as it remains unclear when Tehran will have a promised 60 million doses of Russia's Sputnik V vaccine.

Amir Afkhami, an associate professor at George Washington University, said that over the past year, Iran’s leadership could point to superpowers like the U.S. struggling to contain the virus. With vaccines rolled out in the West and economies reopening, this could become much more difficult to do, he said.

“Ultimately Iran is not self-sufficient when it comes to COVID-19 vaccine development, and it doesn’t have the (intensive care unit) beds to absorb the patients it needs to so it really needs external help," Afkhami said.

Authorities across Iran have closed mosques, restaurants and parks during Ramadan, the Islamic holy fasting month being observed by Muslims around the world. An evening curfew for private cars is in place and travel between cities is banned. Parliament has been suspended for two weeks.

But the wider fatigue from the virus has seen people ignore warnings and host fast-breaking meals known as iftars indoors. Already, authorities blamed celebrations around the Iranian New Year known as Nowruz in March for contributing to this wave.

Masoud Mardani, an infectious disease specialist on Iran's COVID-19 national task force, has demanded a public curfew. But none so far has come.