Saso goes for another LPGA major with limited expectations 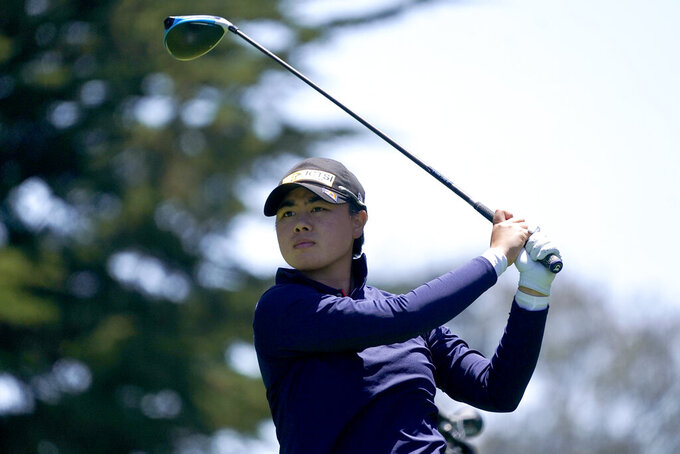 FILE - Yuka Saso, of the Philippines, plays her shot from the 10th tee during the final round of the U.S. Women's Open golf tournament at The Olympic Club in San Francisco, in this Sunday, June 6, 2021, file photo. Fresh off her first major at the U.S. Women's Open, Saso heads to Atlanta Athletic Club for a shot at another in the KPMG Women's PGA Championship. (AP Photo/Jeff Chiu, File)

JOHNS CREEK, Ga. (AP) — Yuka Saso has come a long way in a short time. One week after winning the U.S. Women's Open, she turned 20. Now it's time for another major test in the KPMG Women's PGA Championship, and there is still so much to learn.

For starters, winning the Women's Open gave her a five-year membership on the LPGA Tour, a great surprise to her.

And then there's this matter of a pro-am. Saso had never played in one.

It was only one year ago this week the Filipino made her debut as a Japan LPGA Tour member. Saso tied for fifth, won her next two events and is No. 4 on the money list. Because of COVID-19 restrictions, however, there were no fans and no pro-ams in Japan.

She played her first one at Atlanta Athletic Club, and Saso said later she could only hope she had the score right. The format was a scramble.

For now, the expectations of the newest star in women's golf haven't changed.

“I don't really expect anything,” Saso said. “I'm just more focusing on what I have to do with my game. I'm trying to improve every day to be a better golfer, to be a better person. I'll just do my best, and let's see the result.”

Her game figures to be tested plenty at Atlanta Athletic Club in the third LPGA major of the year. The Highlands course is where David Toms laid up on the closing hole and made par to beat Phil Mickelson in the PGA Championship in 2001, and Keegan Bradley overcame a three-shot deficit down the stretch and beat Jason Dufner in a playoff 10 years later.

It's keeping with a Women's PGA that has taken a big step in stature by raising the prize money ($4.5 million) and going to historic golf courses, such as Hazeltine and Olympia Fields. Still to come is Congressional next year and Baltusrol the year after that.

South Korea has the top three players in the women's world ranking, though parity is getting stronger on the LPGA as evidenced by the list of winners. Thirteen players won the the first 13 events on the schedule this year until Nelly Korda last week became the first multiple winner.

Saso added to that three weeks ago at Olympic Club in San Francisco, seizing on a late collapse by Lexi Thompson and beating Nasa Hataoka of Japan in a playoff.

Just like that, Saso is the No. 9 player in the world, leads the LPGA Tour money list with her $1 million prize from the Women's Open and is headed to the Olympics.

She still hasn't watched highlights of her victory. Saso doesn't like watching video of herself.

“I'd rather watch Rory's,” she said with a laugh.

That would be Rory McIlroy, her golfing idol after whom she tried to pattern her swing. Saso was a surprise visitor to Torrey Pines last week at the U.S. Open, where the USGA arranged for her to walk a few holes with McIlroy during a practice round.

Sophia Popov, another surprise major champion at Royal Troon last year in the Women's British Open, recalls seeing Saso on television earlier this year in Hawaii. The swing got her attention ("As pure as it gets," she said) along with the result (tie for sixth) and her charm.

“Those are the personalities and the players that we can only hope to have on tour, and so seeing her when they told her that she was going to have LPGA status I think was the coolest thing,” Popov said. “I'm like, ‘How surprised can you be? You just won the U.S. Open. You’re clearly one of the best players out here.' I just think it's awesome.”

Popov knows the feeling of going from no status on the LPGA Tour to major champion. Because of the pandemic, she had to wait a few months for her next crack at a major in the Women's PGA last year at Aronimink.

Her expectations changed immediately, mainly because she knew she was playing well and she loves the challenge of a major championship.

“It was all about hitting the right spots, putting yourself in the right positions and being able to score, but as well just protecting from higher numbers,” Popov said. “That's a situation that I like to be in.”

The course measures 6,740 yards, and PGA setup guru Kerry Haigh has options to make the par 5s reachable or three-shot holes, along with a new tee on the par-4 sixth hole that can play about 250 yards.

“I can’t wait to see what the best players in the world ... how they’re going to play because you’ve really got to think on those on every hole," Haigh said.

Sei Young Kim is the defending champion and recent history is not in her favor to repeat. The last 19 majors on the LPGA Tour were won by 18 players.

It's another sign of increasing depth, and with Saso, the LPGA Tour only added to the pool.