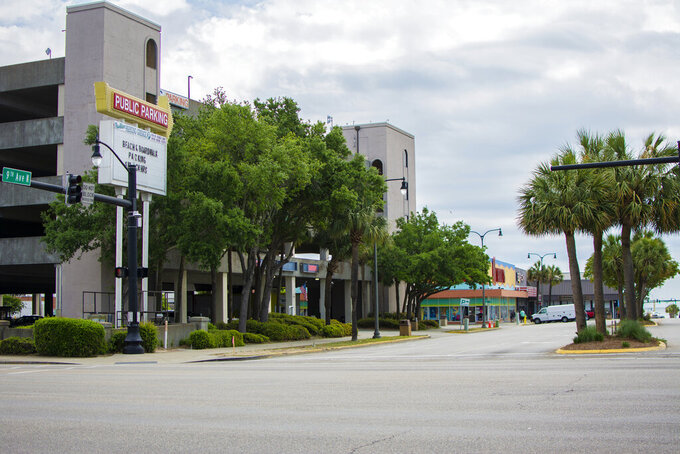 The Pavilion Parking Garage is scheduled to be painted in early summer 2021 as part of a plan to beautify parts of downtown in Myrtle Beach, S.C., on Thursday, May 6, 2021. The Myrtle Beach Area Chamber of Commerce announced plans Thursday to paint downtown’s lone public parking garage, sidewalks and crosswalks in bright colors for its new tourism advertising campaign, “We are the beach.” (Chase Karacosta/The Sun News via AP)

The new law is the latest faceoff in the longtime struggle between people in South Carolina who can afford to live at the beach and people who want to visit.

The law requires state permission to change parking along a state road. It also requires that any fees charged by beach towns for parking only offset the amount spent to provide services to visitors.

Most of those provisions were already in state law. Supporters felt they needed to be clarified after towns, mostly close to Charleston like Isle of Palms and Folly Beach, first closed the roads to their islands when the COVID-19 pandemic began last year and later banned free parking after the governor ordered beaches to reopen in late spring 2020.

Those barrier islands have a long tradition of allowing people to park on the side of state-owned roads, pop open the hatchback or truck tailgate, pull out some towels and coolers and head for the waves and sand.

But in the past few decades, beach bungalows have given way to million-dollar mansions and traffic snarls are constant on sunny, summer weekends.

Island residents said they have the right to control what happens in their own communities, especially making sure emergency vehicles don't get stuck in traffic.

But state law in South Carolina says once public access is allowed to the beach it must always be maintained.

“Although I appreciate the significant, legitimate concerns of interested parties on both sides of these important issues, I believe that this legislation represents a reasonable effort to clarify existing law,” McMaster wrote in his signing statement about the bill.

The Isle of Palms City Council passed a resolution Friday asking the governor to veto the bill, saying it pandered to a small number of complainers while ignoring the city's right to govern itself.

A group of people living on the island threatened to sue.