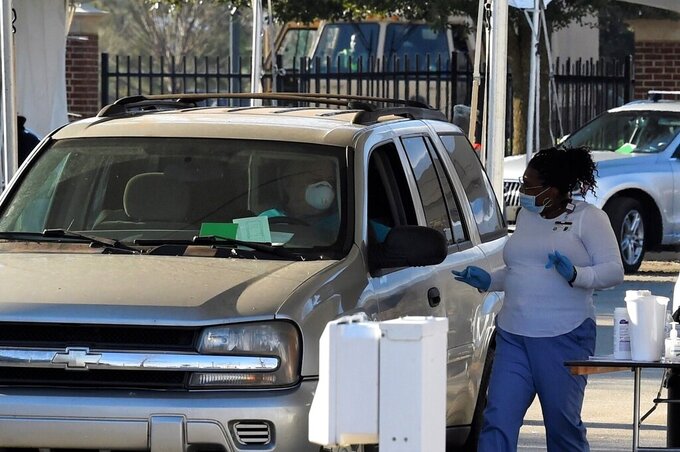 COLUMBIA, S.C. (AP) — It took weeks for Elizabeth Cline to schedule COVID-19 vaccination appointments for her 70-year-old parents, ultimately snagging slots through a hospital system near her home in Greenville.

As they await their second doses, Cline is among those anxiously watching proposals to open up vaccinations to tens of thousands of the state's teachers — an influx that Gov. Henry McMaster believes could stall vaccines for the elderly. But Cline and others like her feel the conflict shouldn't have to mean one group is prioritized over the other.

“I wish more thought had been put into that at the beginning, and it didn’t come down to teachers begging to be heard," Cline told The Associated Press. "I think teachers deserve more prioritization than they’re getting."

Teacher unions in some states have threatened to strike unless their members are vaccinated before being made to return to classrooms. But South Carolina's debate pits state lawmakers against McMaster in a dispute over resuming in-person classroom instruction while still vaccinating the elderly population seen as most vulnerable to the coronavirus, which has led to more than 7,000 deaths in the state.

For weeks, South Carolinians age 70 and up have been receiving doses of the coronavirus vaccine. Earlier this month, the state opened up scheduling to those 65 and older.

On Tuesday, the state Senate unanimously voted to allow teachers, regardless of age, to begin scheduling vaccinations. The measure, introduced by Republican Senate Majority Leader Shane Massey, also requires districts to offer in-person classes five days a week after spring break - even if teachers aren’t fully vaccinated. According to a recent survey, 57% of school district employees - or about 75,000 people - said they would get the COVID-19 vaccine if provided immediately.

Many districts have adopted a hybrid pandemic teaching model, mixing in-person and virtual instruction. Some districts are back full-time; others are strictly online. McMaster has long pushed for the state’s 780,000 public school students to return to classrooms full time. But he wants to continue prioritizing vaccines for those 65 and older, calling it “unethical, immoral, and absolutely unacceptable” to put teachers ahead of them.

“We aren’t going to take a single vaccination away from those who are likely to die from this virus to give to someone who is not,” McMaster said earlier this month.

This has put the two Republican leaders at odds. On Twitter, Massey said that “vaccinating teachers to get kids in classrooms doesn’t mean we discard seniors.”

He said the state is sitting on 265,000 doses of vaccine - and with thousands more expected - has enough for both teachers and seniors.

“We can vaccinate teachers (and) cause very little disruption to existing appointments,” he said. “You sat around for months. No plan. People died,” he tweeted at the governor.

Cline, who has two young children, said the issue should have been sorted out before now.

“A lot of these conversations should have been had and would have saved people mental energy,” said Cline. “We don’t have to force teachers to be face-to-face, five days a week. But if we’re going to do that, then we owe some level of protection, for them and for their families.”

Also in Greenville, Shelley Summer said her 75-year-old father developed anxiety over how difficult he found it to make his vaccine appointment online. But she said she was sympathetic to teachers.

“I really think the delivery of the vaccine was not done well," she said. "It’s a shame that teachers were not considered more important than they are.”

Patrick Kelly, spokesman for the Palmetto State Teachers Association, said the governor may be forced to accept measures like Massey's, while perhaps imperfect, to safely resume in-person instruction.

“If the governor wants to push for five-day, face-to-face instruction ... he needs to employ every tool in his tool kit to make it safe and effective,” Kelly said. “The vaccine is his biggest tool.“

The AARP, which advocates for the interests of Americans over the age of 50, says pressure needs to be put on distributing vaccines better, not changing who gets them first, because 95% of deaths in South Carolina have been from people 50 and older.

“That just seems like a very striking statistic to me, that might indicate where you’d want to prioritize your vaccine distribution on the front end, knowing we are all eventually going to get our vaccine," said Teresa Arnold, director of the South Carolina AARP.

In Charleston, Kyle Draganov said his 80-year-old father-in-law had scheduling troubles, even walking away from one vaccination site out of frustration before finally getting his first dose earlier this month.

But Draganov also said he sees teacher vaccinations as mandatory for schools to reopen.

“If we can’t vaccinate them, then we shouldn’t be opening the schools,” he said. “This past year has been terrible for students. There is no denying that. But to pit kids’ experience against the teachers’ safety is really a no-win situation.”