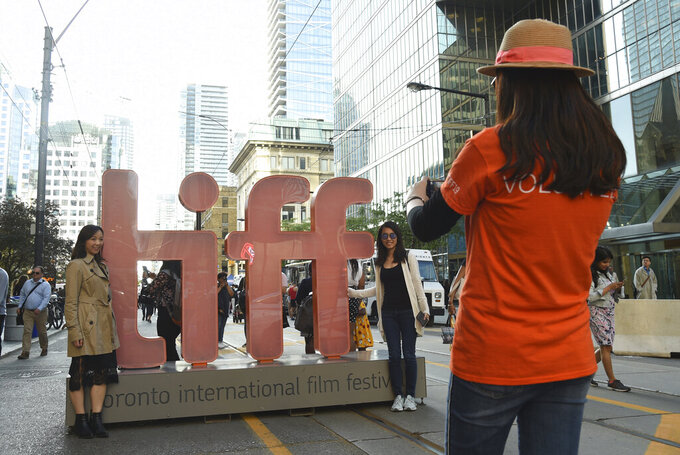 FILE - In this Sept. 5, 2019 file photo, a volunteer takes a photo of people next to signage promoting the Toronto International Film Festival in Toronto. The festival, one of the leading launching pads for fall movies and Oscar contenders, announced plans for a smaller 2020 edition with virtual red carpet premieres and drive-in screenings. It is typically a sprawling city-wide affair that hosts between 250-400 feature-length films and the debuts of many of the fall movie season’s top releases. (Photo by Chris Pizzello/Invision/AP, File)

NEW YORK (AP) — The Toronto International Film Festival, one of the leading launching pads for fall movies and Oscar contenders, on Wednesday announced plans for a smaller 2020 edition with virtual red carpet premieres and drive-in screenings.

The Toronto festival, held annually in early September, is typically a sprawling city-wide affair that hosts between 250-400 feature-length films and the debuts of many of the fall movie season's top releases. Due to the pandemic, organizers said that this year's festival will be contingent on the go-ahead from Ontario health officials.

But for now, TIFF is radically remaking itself. The normal 10 days of festival-going will be halved, at least in physical screenings. For the festival's first five days, it will present social-distanced screenings of premieres, including drive-ins and outdoor screenings.

For the first time, TIFF will also roll out a digital platform of digital screenings and talks that will span the full 10 days of the festival. That will include digital screenings for press and industry members, thousands of whom normally flock to Toronto.

It remains possible that international travel to Canada will be prohibited for much of the film industry. The U.S.-Canada border is closed to nonessential travel through at least July 21.

“The pandemic has hit TIFF hard, but we’ve responded by going back to our original inspiration — to bring the very best in film to the broadest possible audience,” said ​Cameron Bailey, co-head and artistic director. “Our teams have had to rethink everything, and open our minds to new ideas."

On Wednesday, the festival announced 50 films in its lineup, with plans to add more over the summer. But the selections — including Francis Lee's “Ammonite,” Thomas Vinterberg's “Another Round" and Ricky Staub's “Concrete Cowboy” — were a fraction of TIFF's typical lineup. Last year's festival included the world premieres of “Knives Out,” “Jojo Rabbit,” “Harriet,” “A Beautiful Day in the Neighborhood” and “Just Mercy,” among many others.

No major film festival has been held since the global onset of COVID-19. France's Cannes Film Festival, Austin's SXSW and New York's Tribeca Film Festival have all been shut down and forced to improvise. Cannes went ahead with a selection announcement, to help celebrate the movies it had intended to screen. SXSW screened participating films on Amazon Prime for a week.

When the Academy Awards recently postponed it ceremony by two months, the calendar also shifted for the premier fall festivals, including those in Venice and Telluride. Should an even somewhat normal awards season proceed, the September run of those three festivals doesn't align as well with an April 25 Oscars.

Like other festivals, the non-profit TIFF has suffered staff reductions. Earlier this week, it let go 31 full-time employees. Its headquarters and downtown cinemas have been closed since March, though it launched a virtual moviegoing platform, “Stay-At-Home Cinema.”