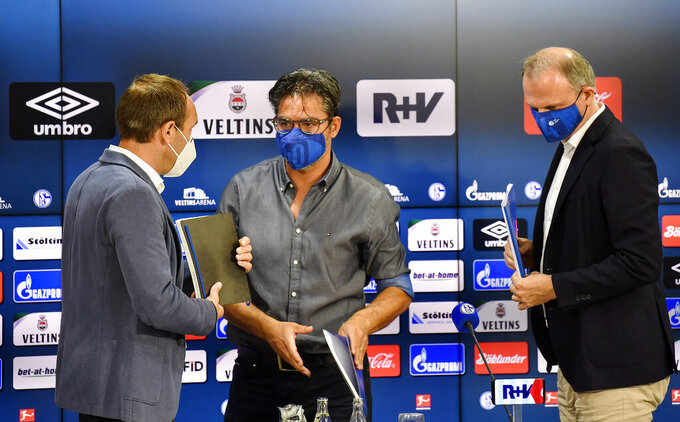 Marketing board Alexander Jobst, head coach David Wagner and sports director Jochen Schneider, from left, gather together after a press conference of Bundesliga club FC Schalke 04 at the arena in Gelsenkirchen, Germany, Wednesday, July 1, 2020. The traditional soccer club went into trouble following fan unrest because of the club's lengthy winless run, financial troubles and the resign of Schalke chairman Clemens Toennies. The controversial Schalke boss faced an outbreak of coronavirus at a slaughterhouse owned by his company and was made responsible by the public for the following lockdown in the Guetersloh district. (AP Photo/Martin Meissner)

Marketing director Alexander Jobst said Wednesday that Schalke spent heavily in a “bet on the future” but ran into trouble when it repeatedly failed to qualify for European competitions.

The announcement came a day after Clemens Tönnies stepped down after 19 years as chairman.

Tönnies, a billionaire who had previously faced calls to resign after making racist comments about Africans at a public meeting last August, had been under increasing pressure to go following a huge outbreak of coronavirus infections at one of his company’s slaughterhouses.

Schalke, which last won a league game in January, finished in 12th place this season. It's the third time in four seasons that the team has failed to qualify for European competition.

Jobst said the club would hit the “stop button” on investments, cut spending on salaries and wouldn't be able to fight for European qualification for up to three seasons.

He did not comment on reports in German media that the club was seeking a loan guarantee of up to 40 million euros ($45 million) from the state government, citing confidentiality obligations.

Schalke coach David Wagner is expected to stay for next season despite the winless run, but some players are moving on.

Right back Jonjoe Kenny is heading back to Everton after a season-long loan, and Schalke said it had broken off a loan deal for Barcelona left back Juan Miranda, who had been expected to stay with the club until the end of the 2020-21 season.

Defender Benjamin Stambouli's contract is up but the club is in talks to persuade him to stay, sporting director Jochen Schneider said.

Schalke isn't alone among German clubs in feeling financial pain during the pandemic. Other clubs have projected shortfalls in income after the pandemic wiped out ticket sales, but Schalke's heavy spending in earlier seasons made the problems worse.

Hertha Berlin is bucking the trend, though.

Schalke's plans for cost-cutting were announced on the same day that Hertha investor Lars Windhorst's holding company injected an extra 150 million euros ($169 million). The club indicated it will plow much of the money into transfers and wages.

“I am very pleased with the further investment because with the funds which have been made available we have much more latitude to push forward with the sporting development of Hertha BSC,” sporting director Michael Preetz said.